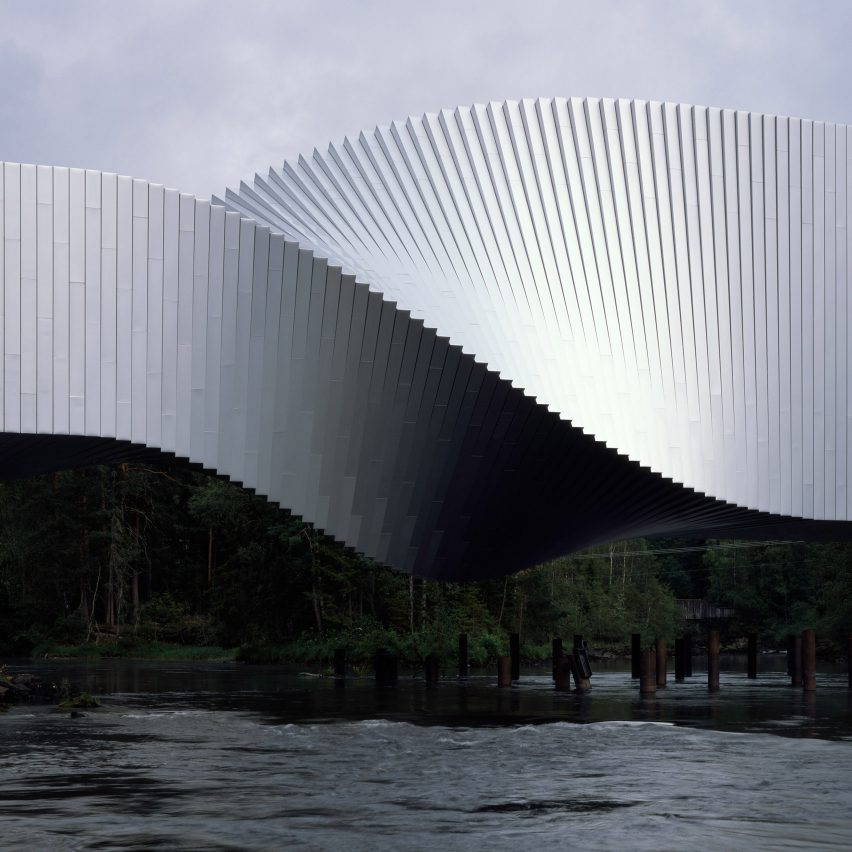 BIG has completed The Twist art gallery that twirls “like a deck of cards” and bridges the river dividing Kistefos sculpture park in Norway.

Described by BIG’s founder Bjarke Ingels as “an inhabitable bridge”, the primary goal of the aluminium-clad art gallery is to improve the park’s circulation by offering a new river crossing.

The statement twist at its centre is designed to reconcile the different heights of the river banks, and in turn creates a distinctive sculptural aesthetic. 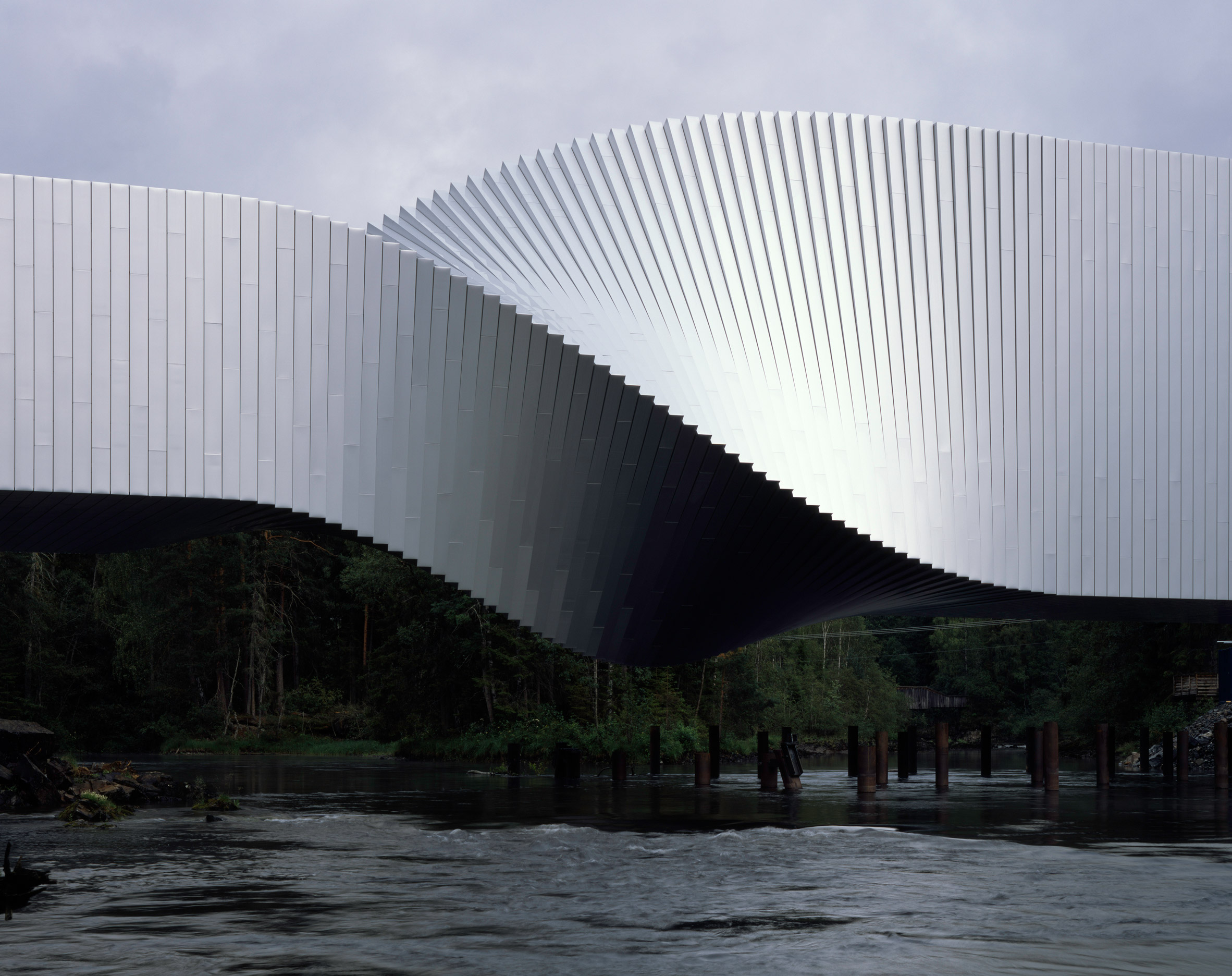 “What’s really incredible about Kistefos is the sculpture park. The idea of the museum was more of an add on, but by making it into a bridge, it really became an integral part,” Ingels told Dezeen. 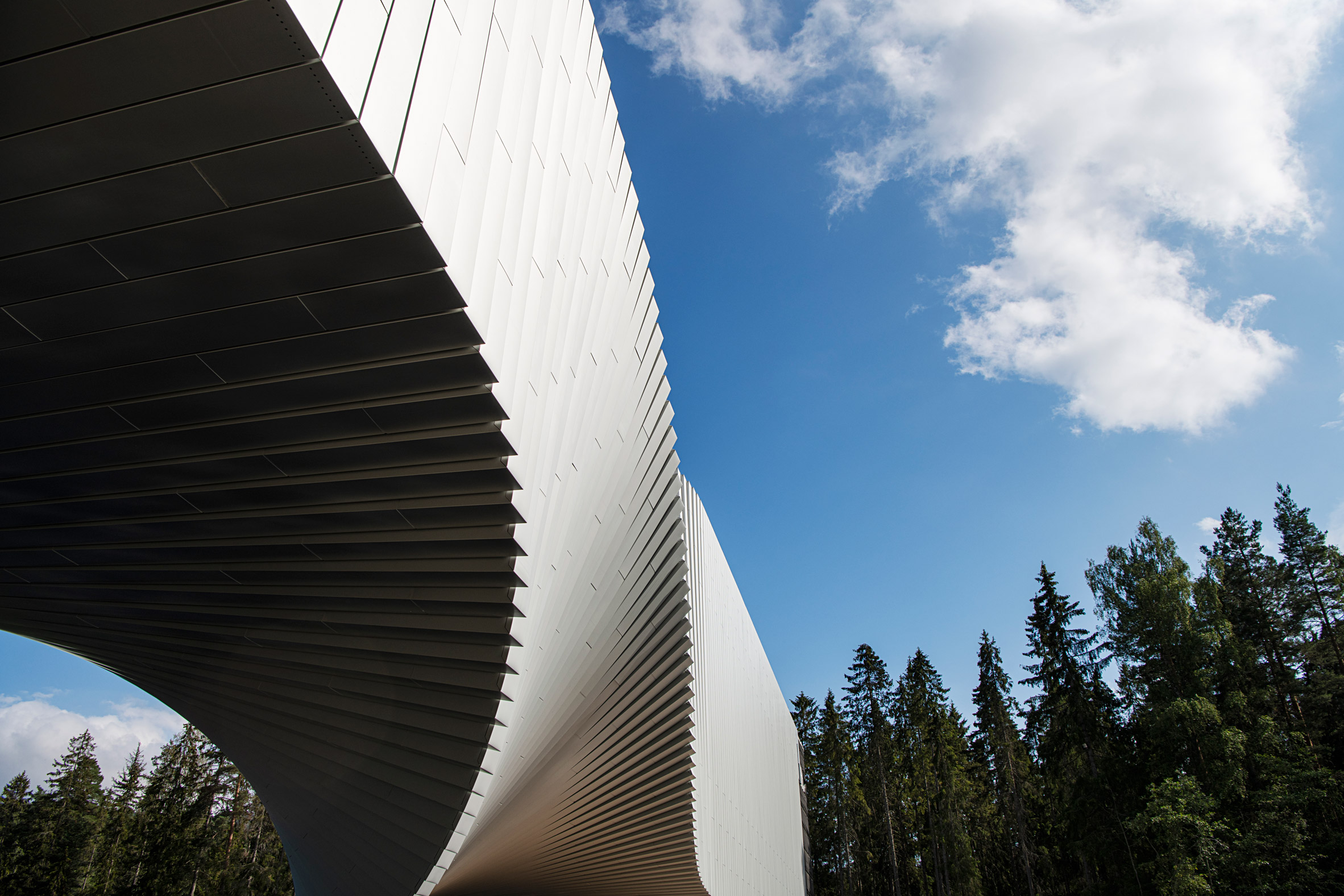 Kistefos Museum and Sculpture Park was founded in 1996 by Christen Sveaas on the former site of his wood pulp business. It comprises an industrial museum, exhibition galleries and sculpture park with a collection of artwork by the likes of Anish Kapoor, Olafur Eliasson, and Fernando Botero.

BIG first revealed the design for The Twist in 2015 after winning a competition held by Sveaas that invited designs for a new museum for contemporary art that would transform the site into a “must-see cultural destination”.

The Twist was chosen for its ambition to reconfigure the site and provide new and otherwise unattainable vistas of the river and mill. 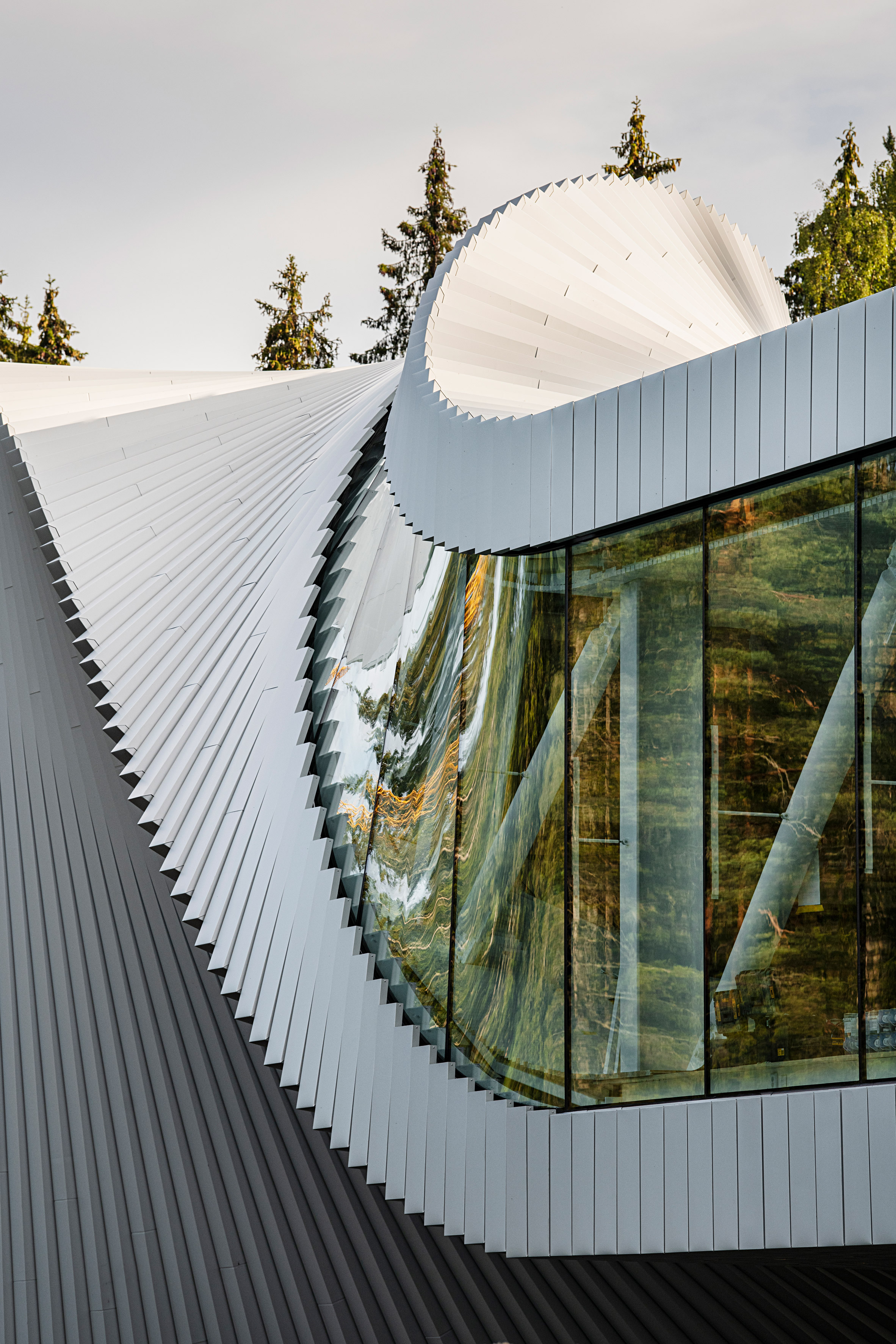 As a nod to the post-industrial site, BIG wrapped The Twist in strips of raw aluminium. These are gently staggered like a deck of cards to form the optical illusion of a curved form.

The consistent use of aluminium on the facade also results in a “pure and object-like” appearance, helping to unify the two ends of the building that are different in size and character. 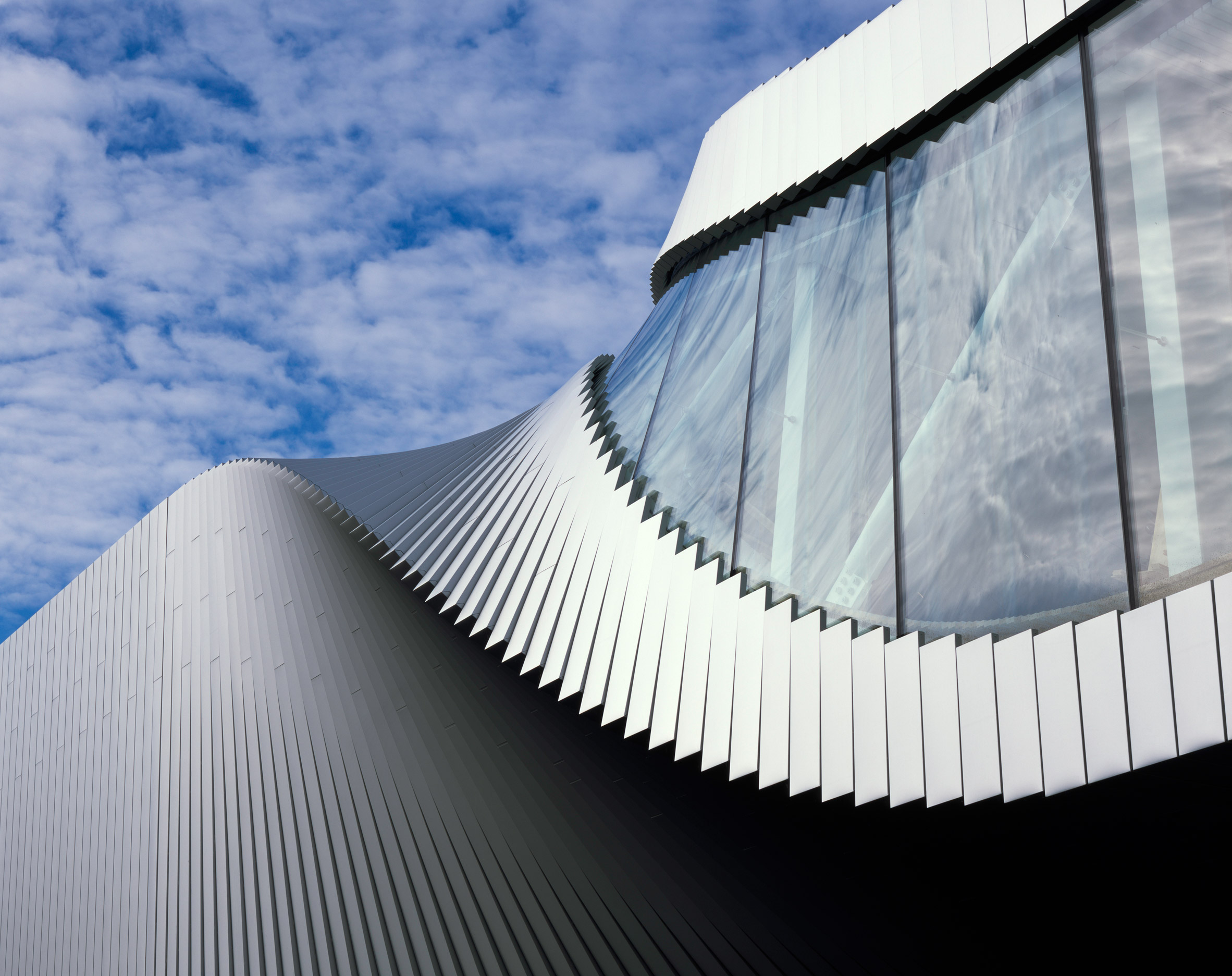 At the south end of The Twist, visitors are welcomed by a stark double-height monolithic entrance. Inside, it there is an imposing, windowless space – described by Ingels as “introverted”.

This sits in contrast to the “extroverted” north side of the building, which is single-storey and lined by a band of floor-to-ceiling glazing. As the glazing unzips from the twist, this creates a light-filled gallery inside that overlooks the old pulp mill 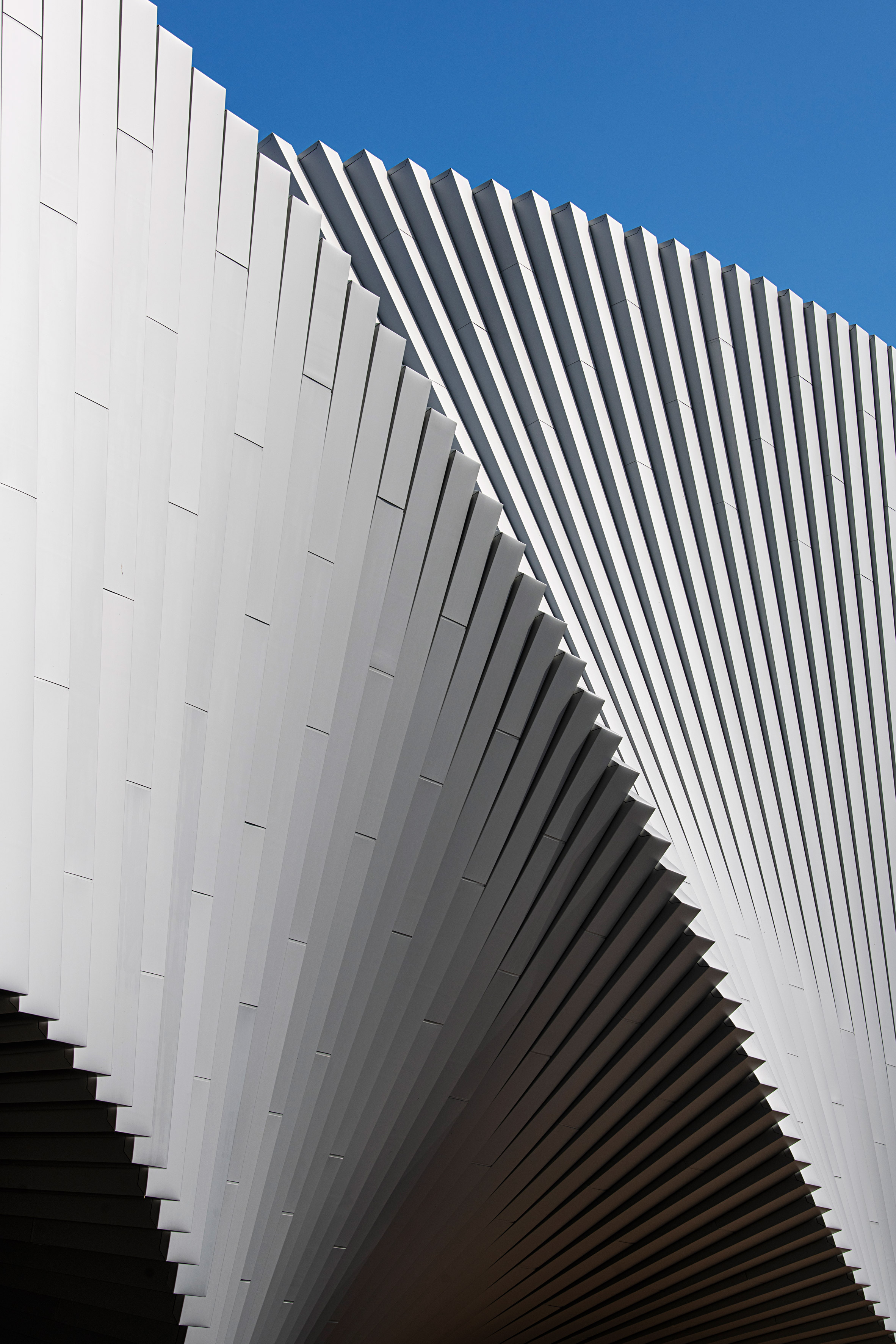 Inside, the twist forms a folding shell-line gateway between the two exhibition spaces, mediating the transformation of the spaces. This is helped by a consistent interior finish – lined with white-painted slats of douglas fir to create a simple backdrop to the artwork.

“[The twist] connects an introverted vertical gallery to this extroverted panoramic room, where you have spectacular views of the river and the mill. The darkness to the lightness. The art and the nature,” explained Ingels.

“It felt like it was so conceptually clear that where the two things meet, the twist happened. The twist is this blatant translation from one end to the other. It makes this sort of third room.” 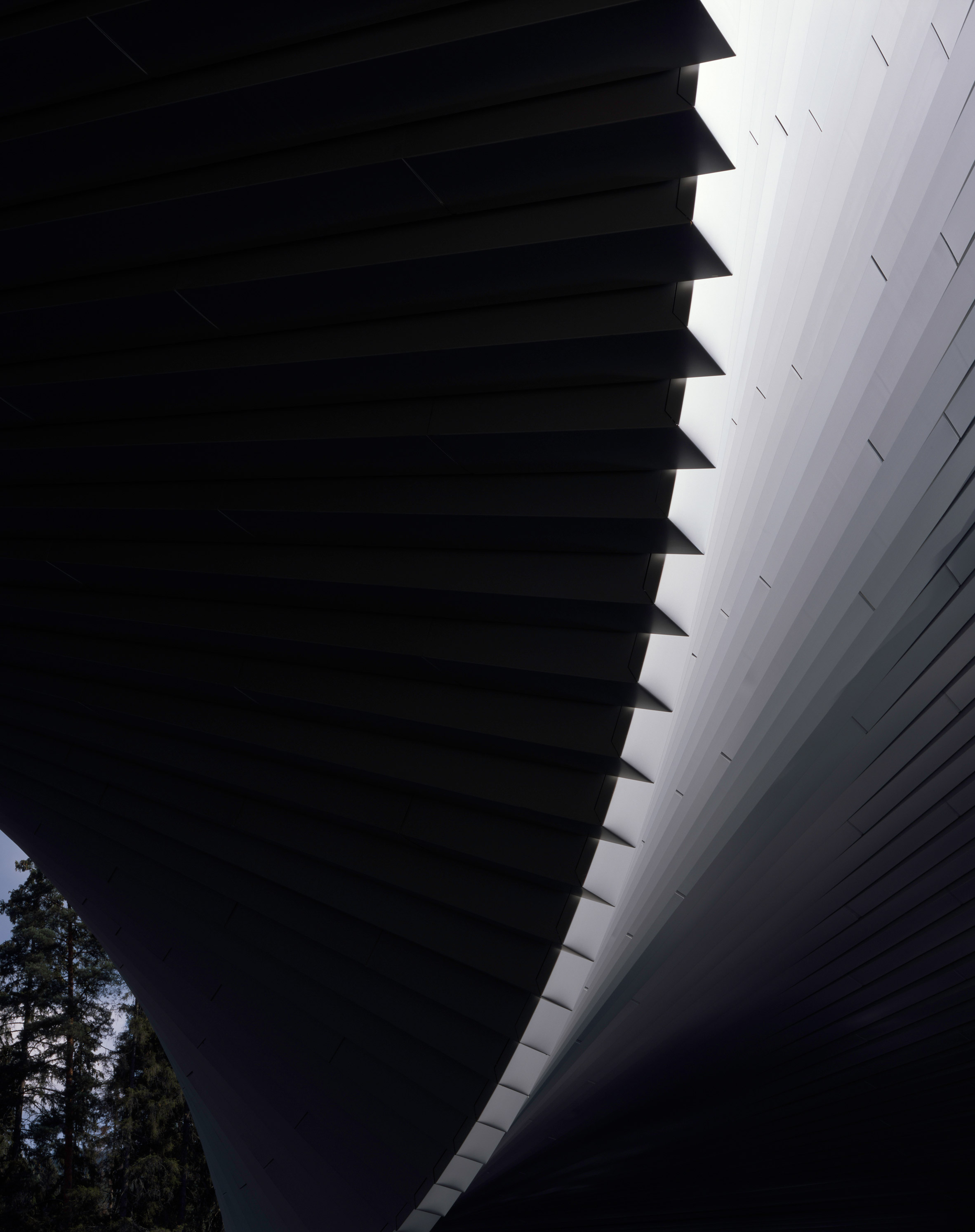 Below the northern gallery, The Twist is complete with a hidden basement that is lined with concrete and glass, intended to form a visual continuation of the river outside. This space contains bathrooms, which are also complete with artwork and look out onto the belly of the bridge.

The Twist’s first exhibition Hodgkin and Creed – Inside Out is now open to the public, and will continue until 17 November 2019.

BIG is an architecture practice with studios in Copenhagen, New York, London and Barcelona, which was founded by Danish architect Bjarke Ingels in 2005.

Other recent projects by the studio include the looping MÉCA cultural centre in Bordeaux and a university building in Massachusetts with copper walls.

Photography is by Laurian Ghinitoiu.