Biobasecamp pavilion aims to demonstrate the potential of timber in architecture 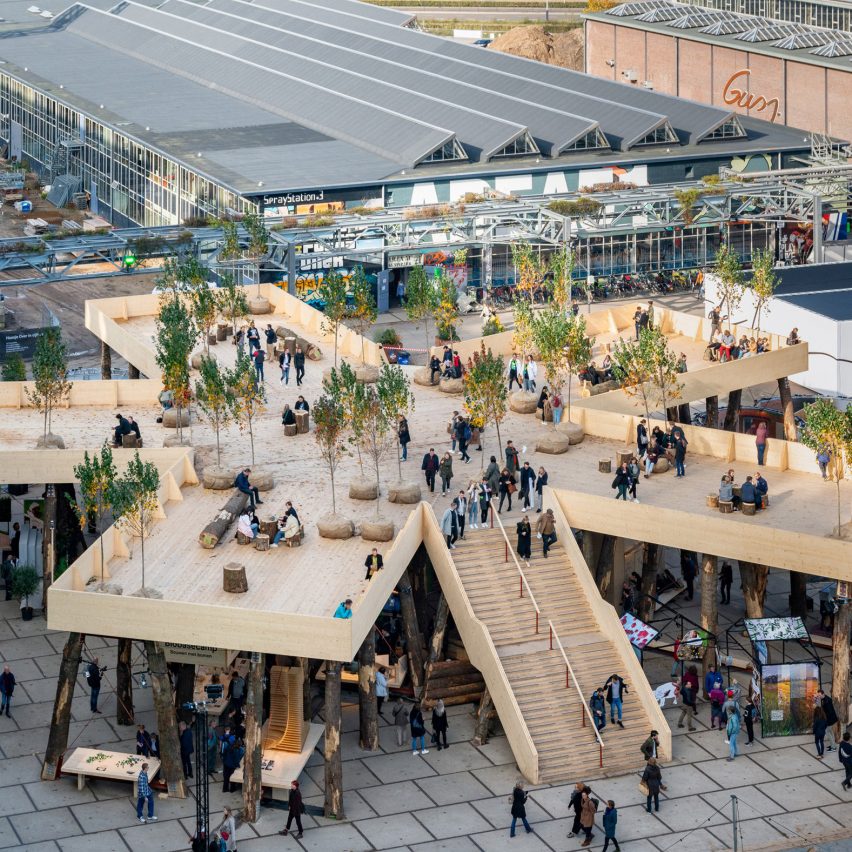 A timber pavilion called Biobasecamp at Dutch Design Week brought together projects that demonstrate the potential of the “concrete of the future” to fight against climate change.

Studio Marco Vermeulen built the wooden pavilion as a covered exhibition-space for a series of displays highlighting how timber can be used in bio-based architecture projects.

Called Biobasecamp, the pavilion was erected in Ketelhuisplein in the Strijp-S district of Eindhoven for the duration of Dutch Design Week. 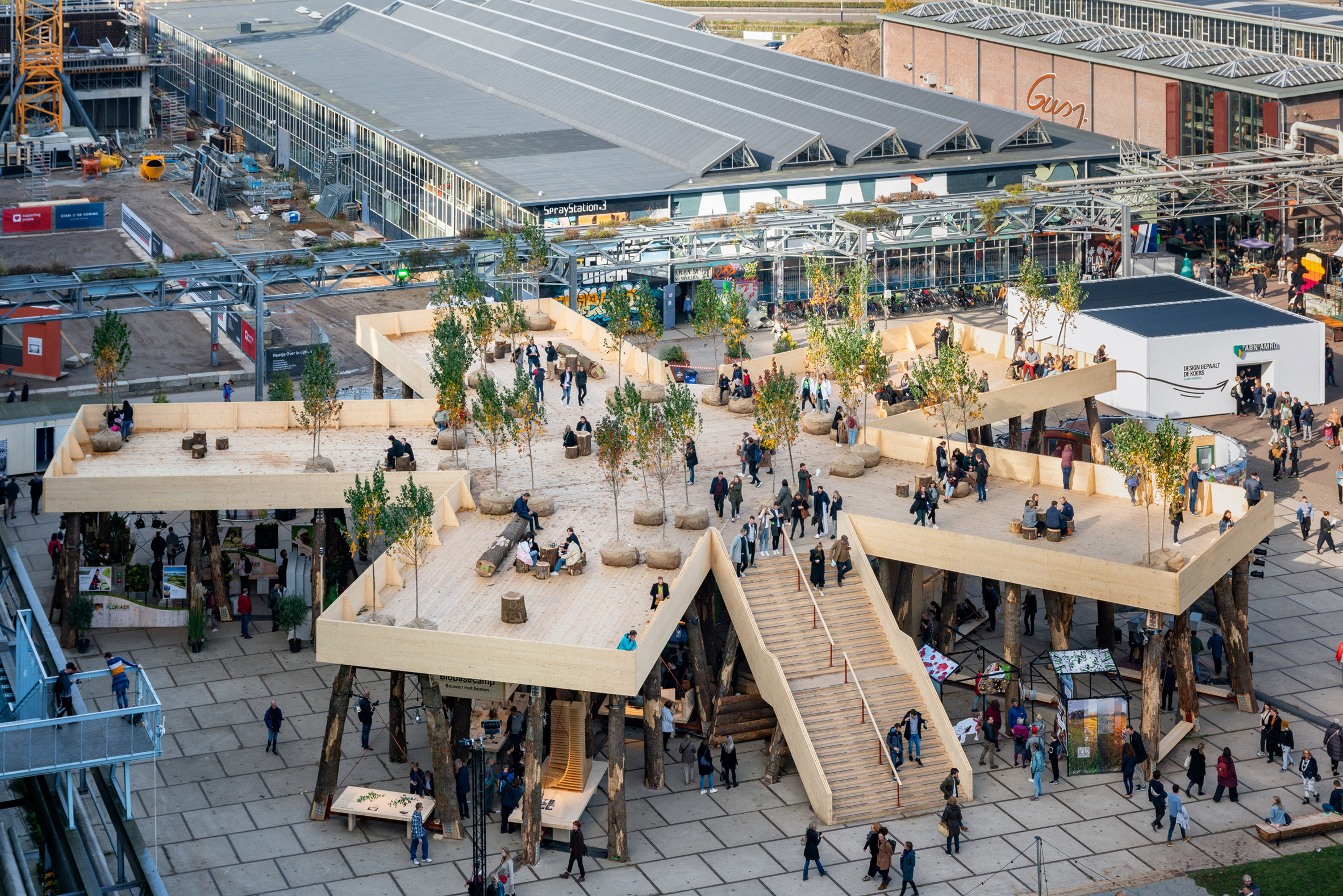 The roof of the pavilion was the shape of a five-pronged star with squared corners. It was built by timber construction specialists Derix from 200 metres-cubed of lightweight, modular 16 by 3.5 metre cross-laminated timber (CLT) boards.

“We want to introduce visitors to bio-based building and in particular the use of cross-laminated timber,” said the studio. “It generates a starting point of exploration for designers and clients towards the possibilities that this ‘concrete of the future’ offers.” 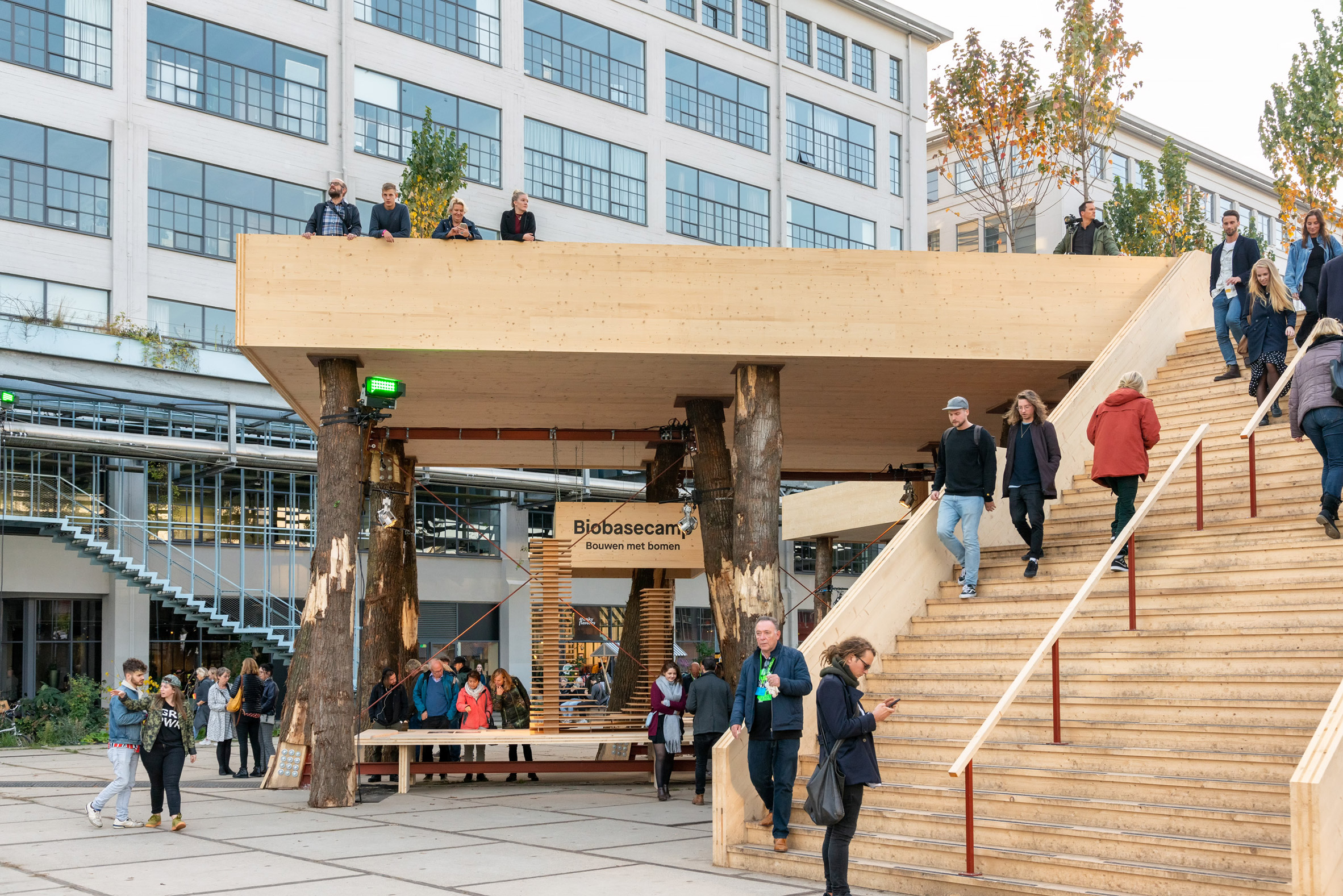 A staircase from ground-level allowed the roof deck – which was dotted with trees – to double as a viewing deck and gathering area.

The supporting pillars that held up the deck were made from trunks of poplar trees taken from the motorway between Den Bosch and Eindhoven.

The trees had to be cleared from the edge of the road for road safety reasons, due to their age and the risk of being uprooted, and were repurposed for the pavilion. 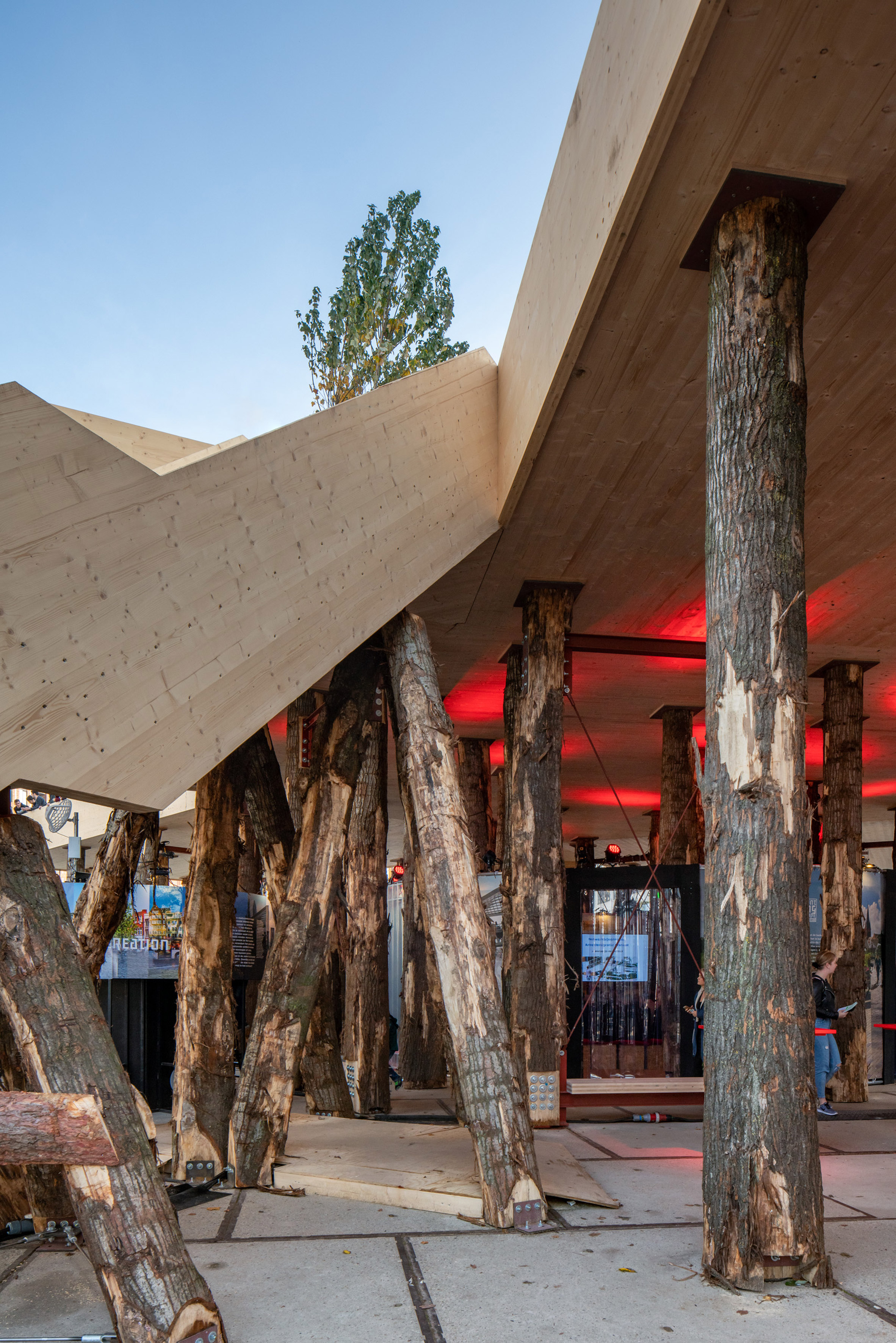 Using CLT and timber supports meant that the pavilion could be constructed in a short amount of time.

“Normally you build something and then someone else has to add all the pipes, the cabling, and doors, etc.” said Marco Vermeulen, founder of Studio Marco Vermeulen. “Here it is all prefabricated, which speeds up the building process enormously.” 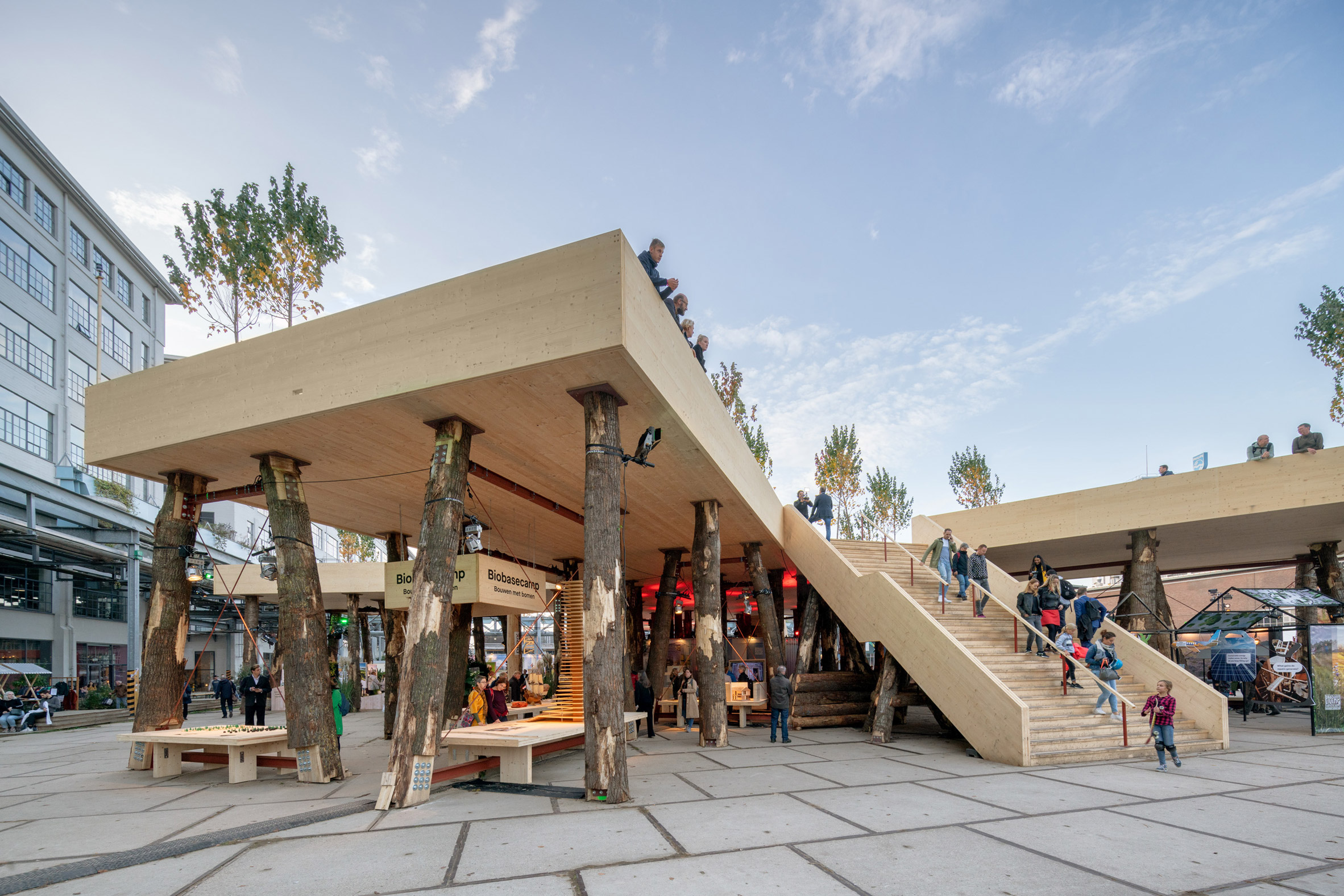 Unlike concrete or other building materials which require large amounts of CO2 to produce, timber stores it. This allows the construction sector to “play an active role in the fight against climate change”, according to the studio.

“By building with wood, CO2 is actually extracted from the atmosphere,” said the studio. “In contrast to, for example, costly storage under the North Sea (CCS), this form of CO2 storage creates value in the form of buildings.” 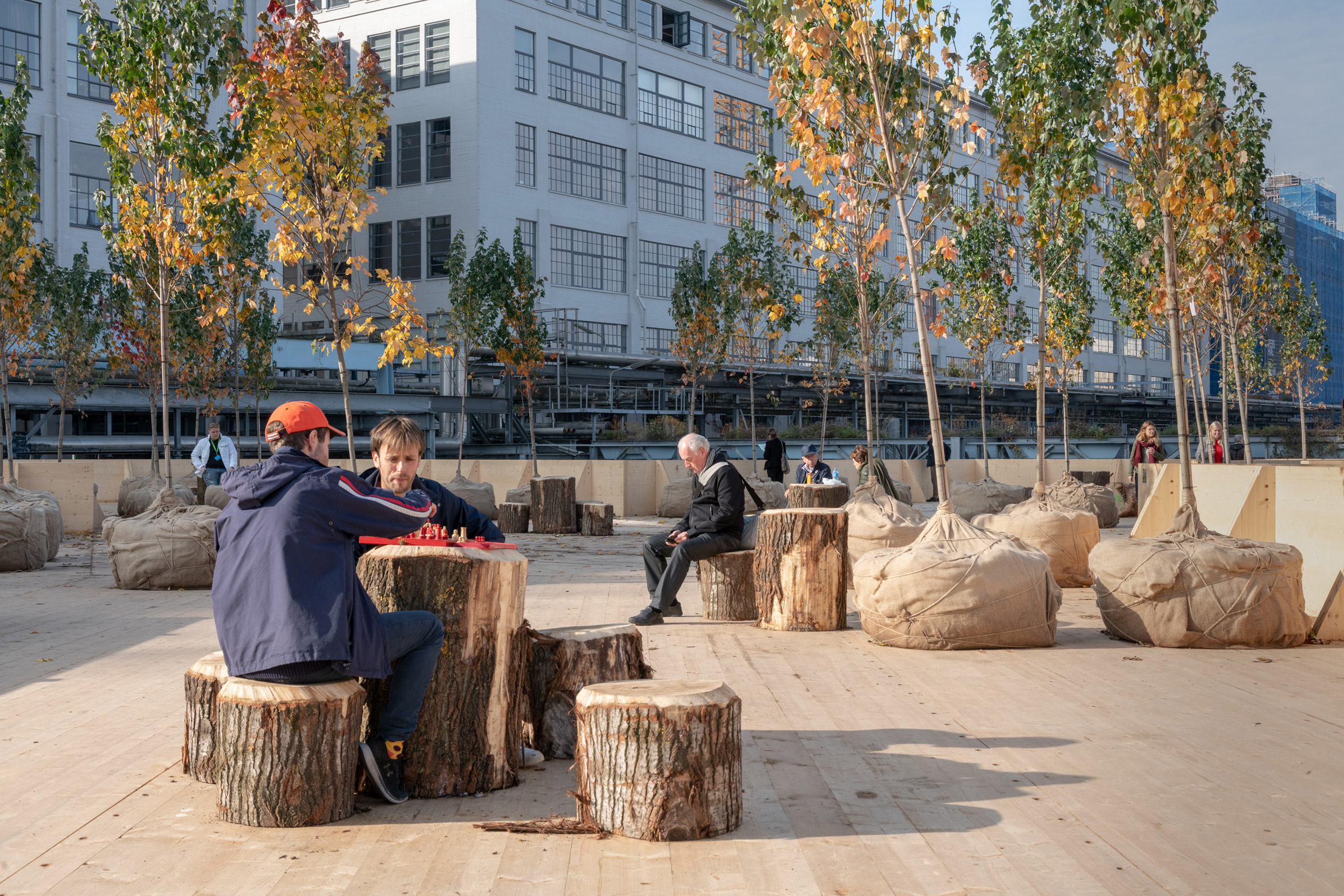 During a talk hosted by Dezeen editor-in-chief Marcus Fairs during Dutch Design Week, Vermeulen said that the Netherlands could solve its impending housing crisis by building a million new homes from sustainably harvested local wood.

This would save 100 megatons of carbon, he argued, as the timber would lock up 45 megatons of CO2 and not building out of concrete and steel would lead to a saving of a further 55 megatons of emissions. 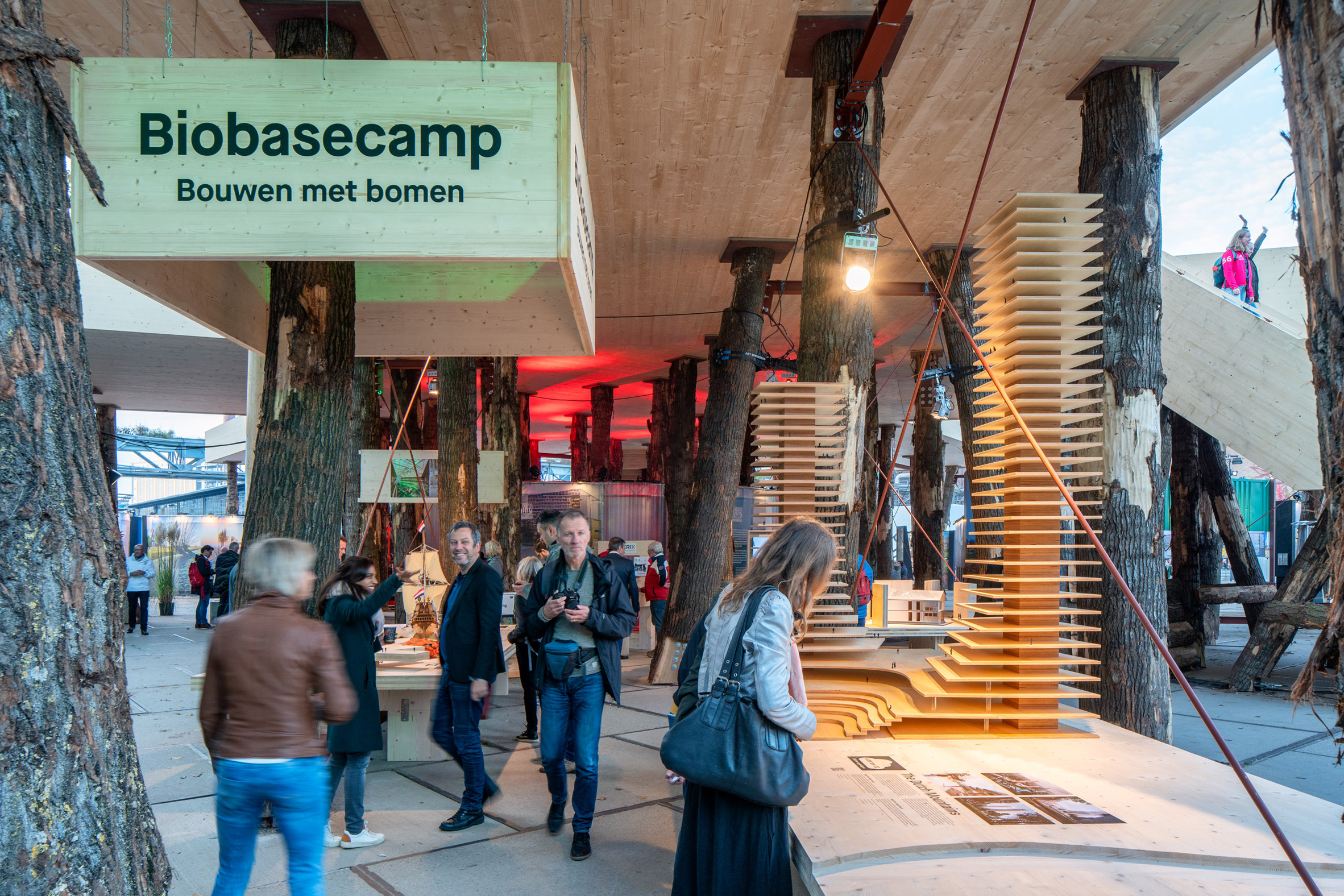 “And if you make the elements of your constructions modular so that they can be reused again and again, you can store it for even longer,” said the studio, in relation to Biobasecamp.

For this reason, the pavilion will be deconstructed and reused at the Floriade horticultural show in Amsterdam in 2022. 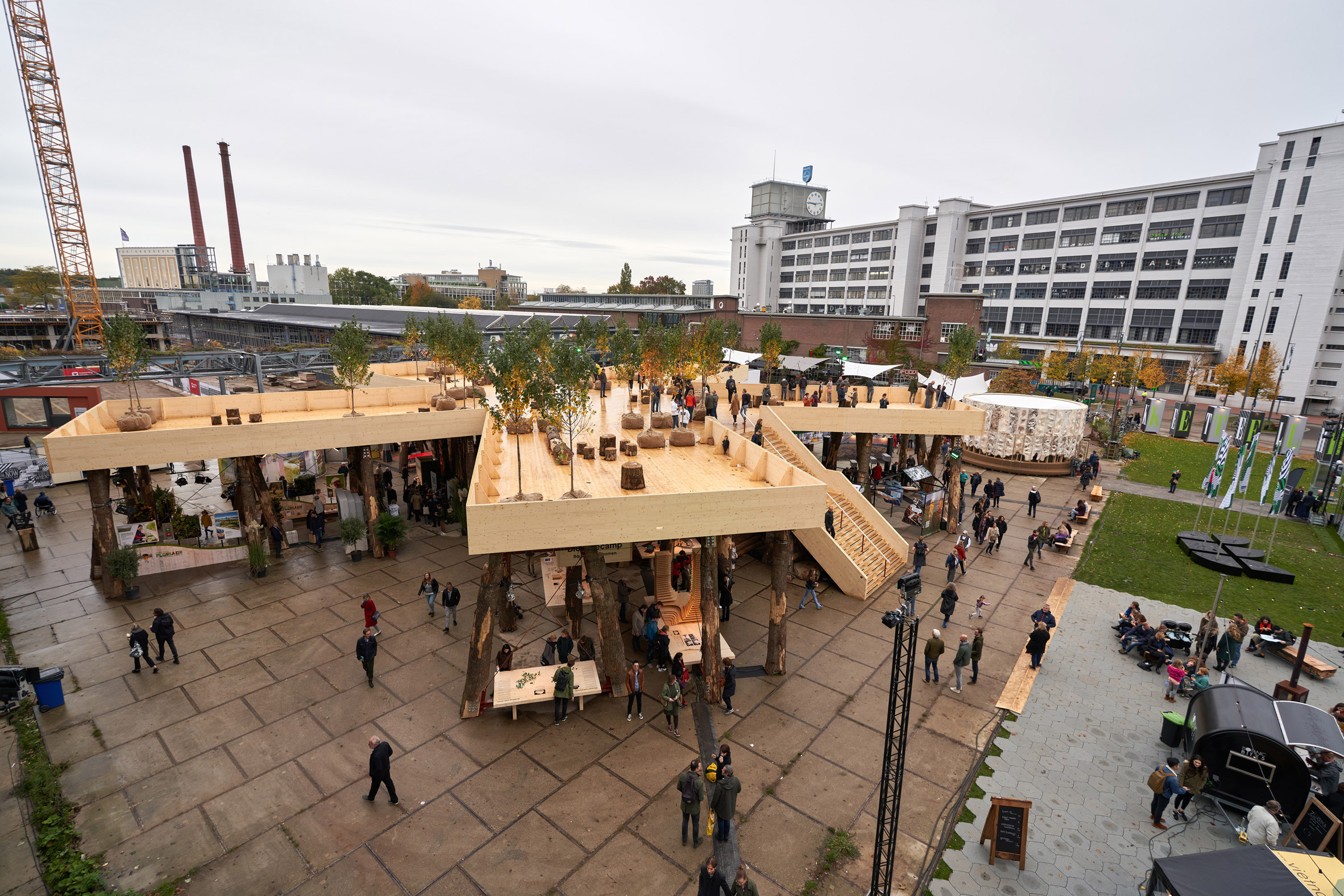 Beneath the pavilion roof, timber construction-firm Derix, Floriade horticultural show and the Dutch provincial government of Noord-Brabant showed exhibitions that highlighted the benefits of using of timber in architectural projects.

Waldo Maaskant, the programme leader for a bio-based economy and circular future for the province, said that circular construction has “a great future”.

The province works together with construction companies and housing co-operative to develop circular construction projects, he said.

“The Netherlands and Brabant faces a major building challenge,” said Maaskant. “The Province of Noord-Brabant has given circularity an explicit place and boosted projects in the field of circular construction, renovation and demolition.” 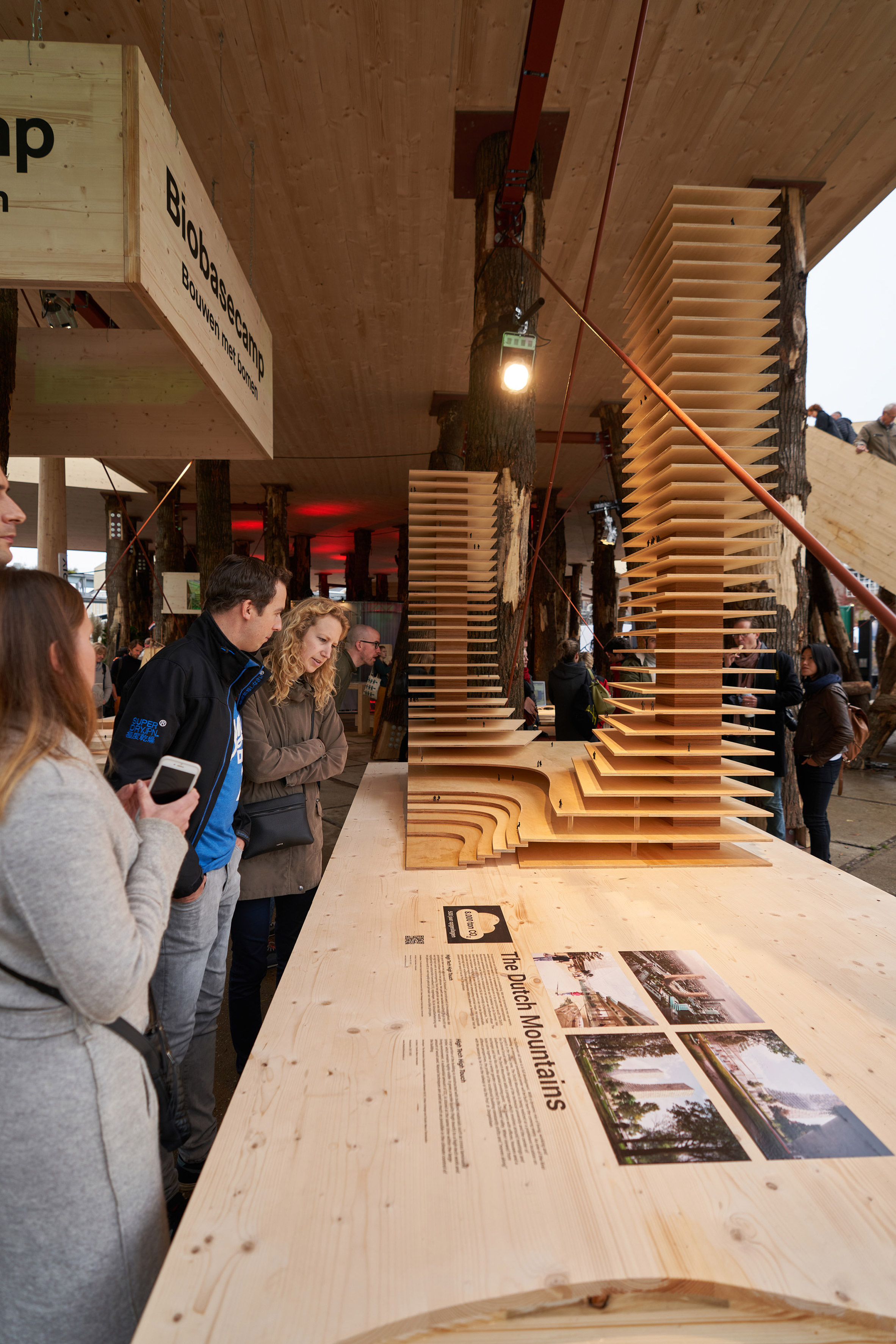 Studio Marco Vermeulen exhibited a taster of its upcoming The Dutch Mountains Eindhoven project at Biobasecamp. The timber building, which is at the preliminary design status, is a U-shaped, bio-based, mixed-use skyscraper planned for the Eindhoven rail zone.

Meanwhile, interactive exhibition Living Landscape inspired visitors to the pavilion to make green choices in their own lives.

“To compare this pavilion with the Crystal Palace built in 1851 in Hyde Park, London, for the Great Exhibition which symbolised the industrial revolution is of course far too pretentious,” said the studio. “But may this pavilion at least mark this possible turning point for a new era.”

Other projects at Dutch Design Week made from natural materials included a temporary events space, called the The Growing Pavilion, constructed from mushroom mycelium panels, while Atelier NL created benches from storm-felled trees for several locations in the city.

The post Biobasecamp pavilion aims to demonstrate the potential of timber in architecture appeared first on Dezeen.

Back Porch Rebuild and Refresh