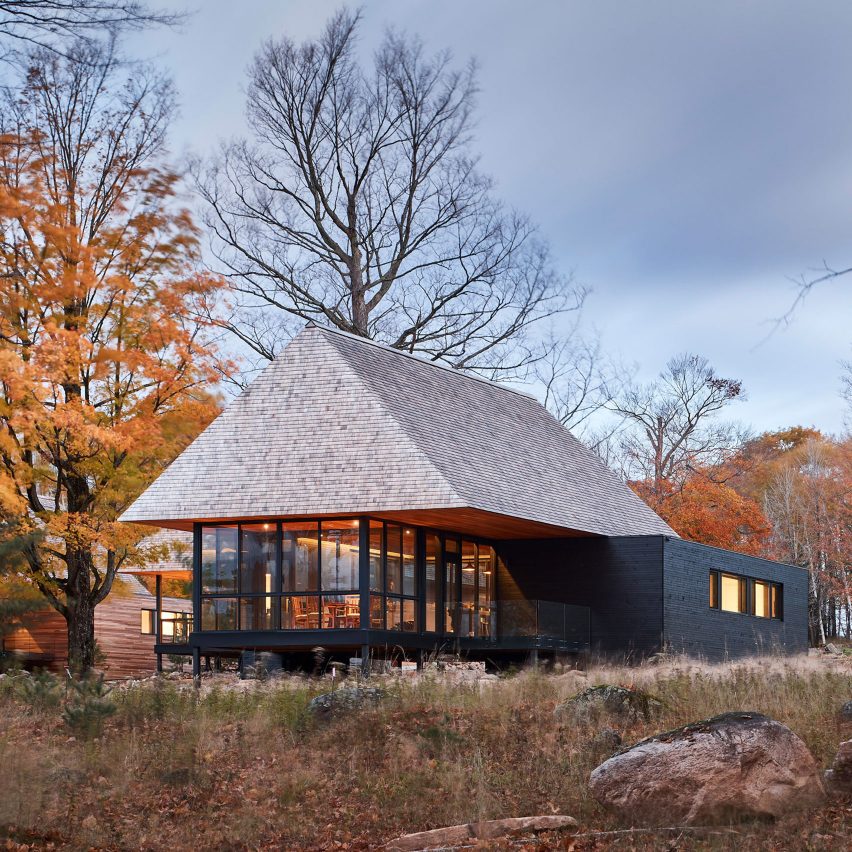 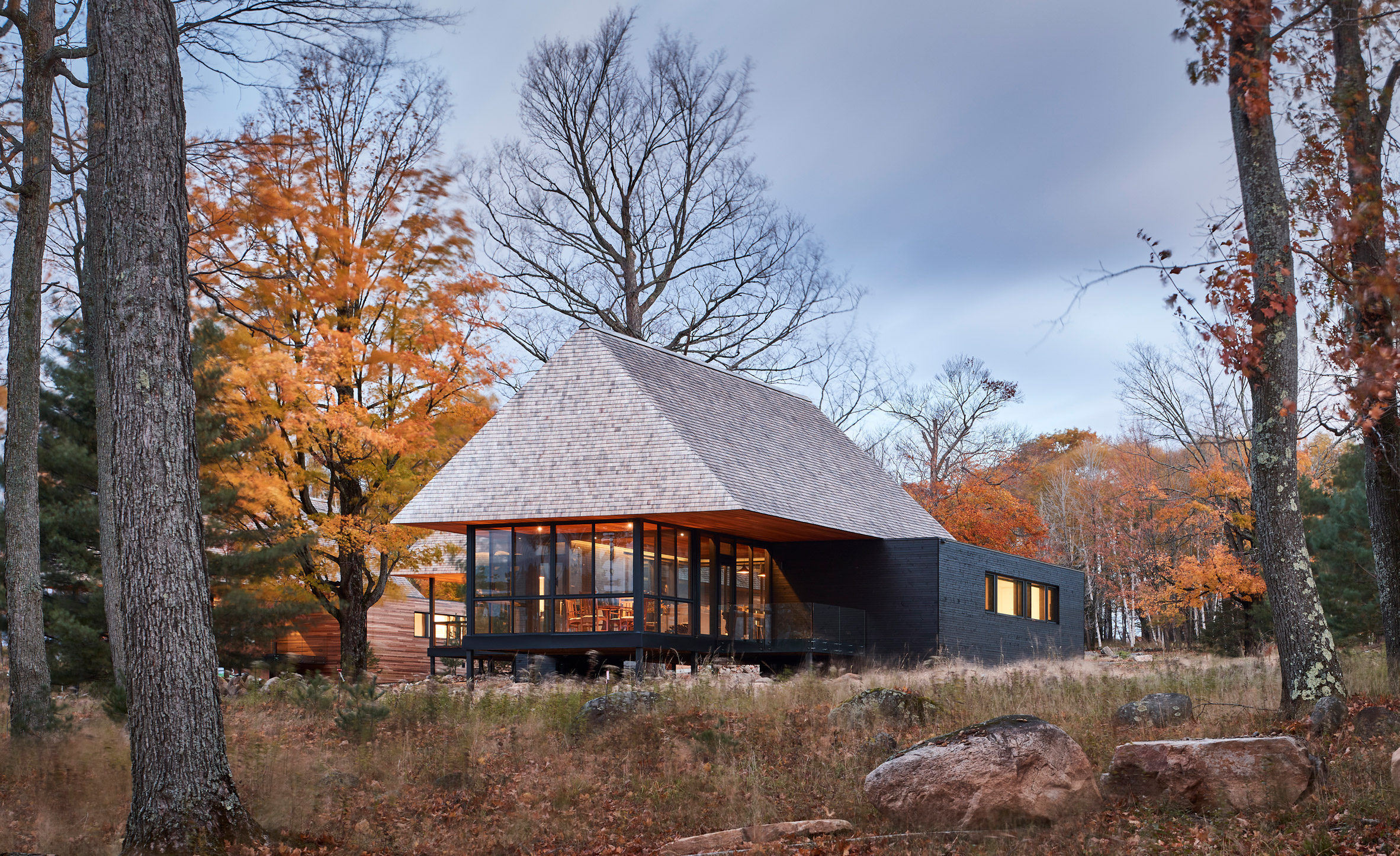 The Bigwin Island Club Cabins are part of a planned community on a 210-hectare island in the Lake of Bays, located about 260 kilometres north of Toronto. The island is named after Chief John Bigwin of the Ojibway indigenous community.

Bigwin Island has long been a summer retreat for well-heeled travellers, with the first resort and golf course being built there in the 1920s. The area fell into disuse in the late 20th century, but has been revitalised in recent years. A new, 18-hole championship golf course opened there in 2002.

A housing development with 40 cabins is now planned for the private island, which is dotted with maple, pine and ash trees.

MacKay-Lyons Sweetapple Architects – which is based in Halifax, Nova Scotia – has designed three different models, all of which employ the same design vocabulary and offer views of the scenic landscape. Ranging from 116 to 125 square metres, the holiday homes are meant to be “quietly assertive” and exhibit a heightened level of craftsmanship.

The architects began the design process by “listening to the land.” In particular, they took note of the clear vistas under trees – the result of deer grazing. These openings “influenced the siting of the buildings and their emphasis on transparency between roof and floor, and earth and sky,” the studio said.

The three different models take cues from varying landscape conditions. The Linear on the Lake model is a long, rectangular bar, while Pinwheel on the Meadow consists of two offset bars.

The Court in the Woods model is L-shaped in plan. So far, three homes have been completed – one featuring the pinwheel plan, and the other two employing the linear model.

Exterior walls are wrapped in shiplap wooden boards and large stretches of glass. Topping each home is a large, hip roof clad in cedar shingles.

The distinctive roof takes cues from the region’s historic cottages and boathouses – and even “the interior of a canoe, without ever veering into kitsch,” the architects said.

In terms of programme, the team developed a kit of parts that consists of a great room, hearth, “sleeping box”, deck and screened-in porch.

Interior rooms are sheathed in warm-toned cedar and oak, drawing a connection to the buildings’ facades and the surrounding terrain. The public zone sits under a soaring ceiling that channels hot air upward and out through the peaked roof.

The homes are meant to engage not only with the landscape, but also with each other. Dwellings are arranged in clusters to help create a sense of community.

“The spaces between them are small enough to allow neighbours to wave each other over,” the studio said. “Some will encircle meadows ideally sized for cookouts and children’s games.” 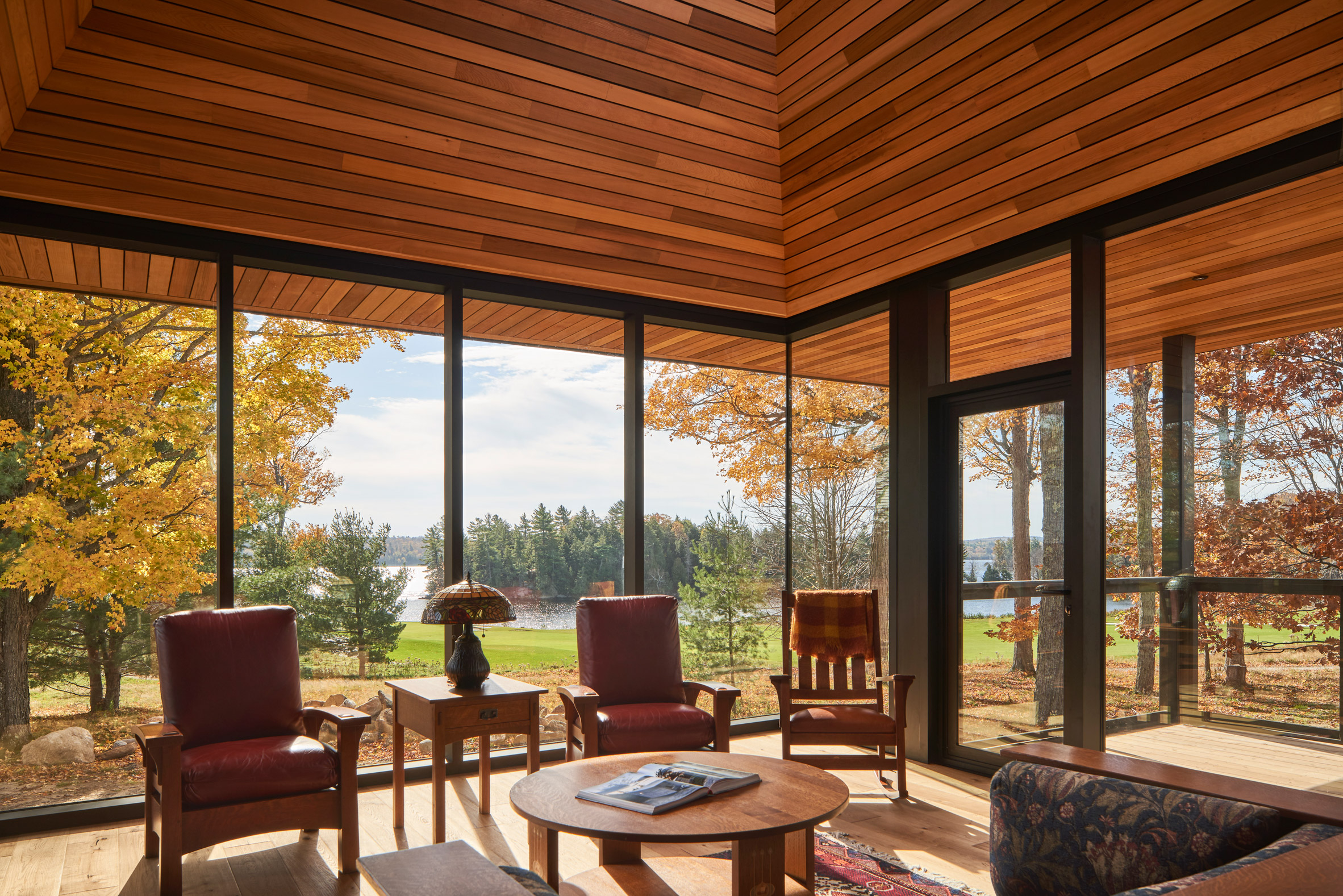 Sustainability was a guiding concern for the design team. The project’s eco-friendly features include a geothermal heating system and the use of local materials and labour.

“The roof structure, for example, is made from ordinary engineered trusses, elevated through meticulous design into something beautiful,” the studio said.

The firm won the Bigwin Island commission through a competition hosted by the client, Jack Wadsworth, whose goal was to create a development that embraced the landscape, respected the site’s history and maximised energy efficiency. MacKay-Lyons Sweetapple’s design beat out schemes by five other firms. 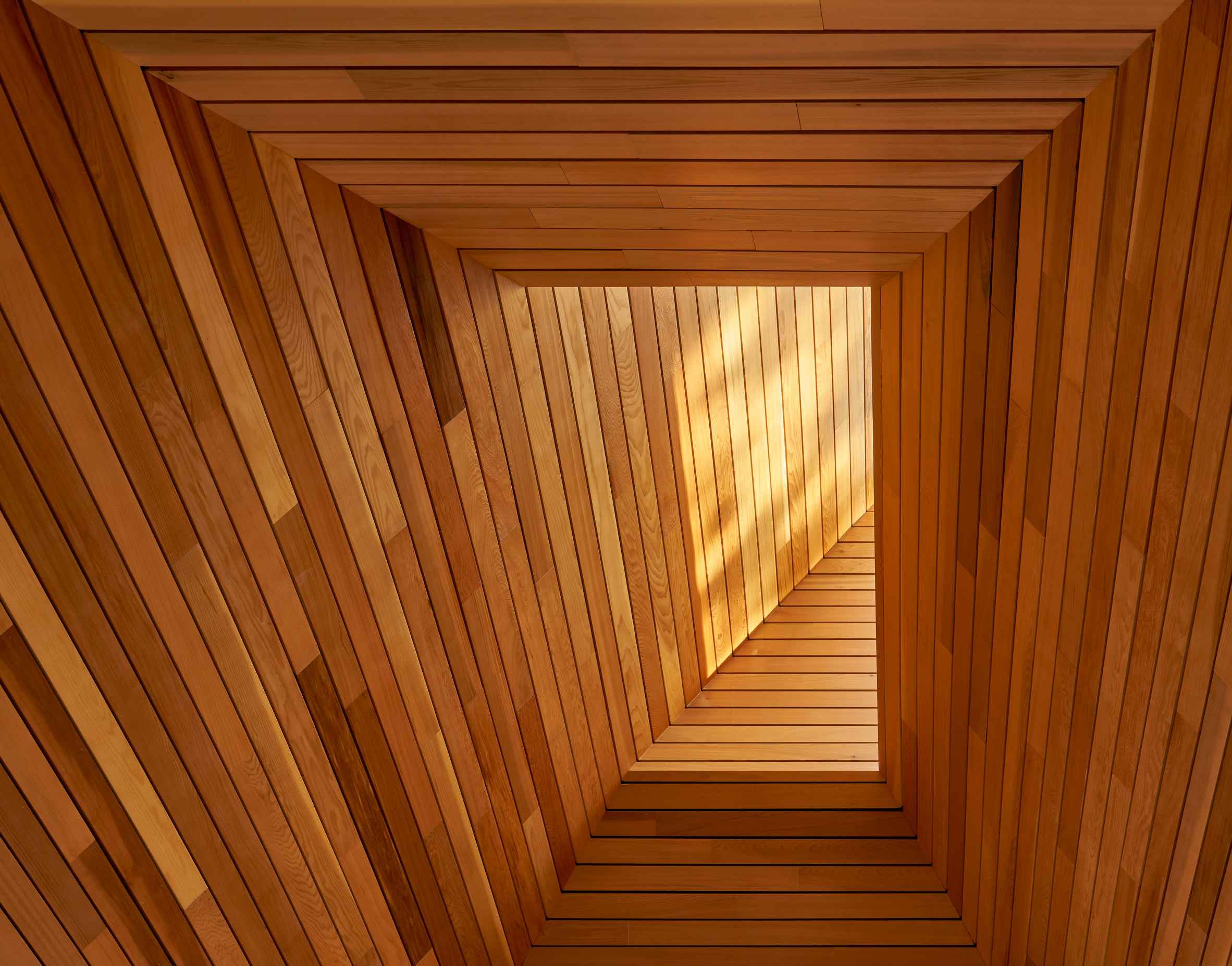 “Durable enough to stand up to the demanding climate of their location while elegantly referencing its layered heritage and beauty, the Bigwin Island cabins offer a balanced, inventive and sustainable response to a complex architectural challenge,” the firm said.

Other projects by MacKay-Lyons Sweetapple include the wooden Cliff House, which extends over the edge of a rocky outcrop in Nova Scotia, and the Horizon mountain retreat in Utah, which consists of staggered, cedar-clad cabins near a popular ski park.

Photographs are by Doublespace Photography.