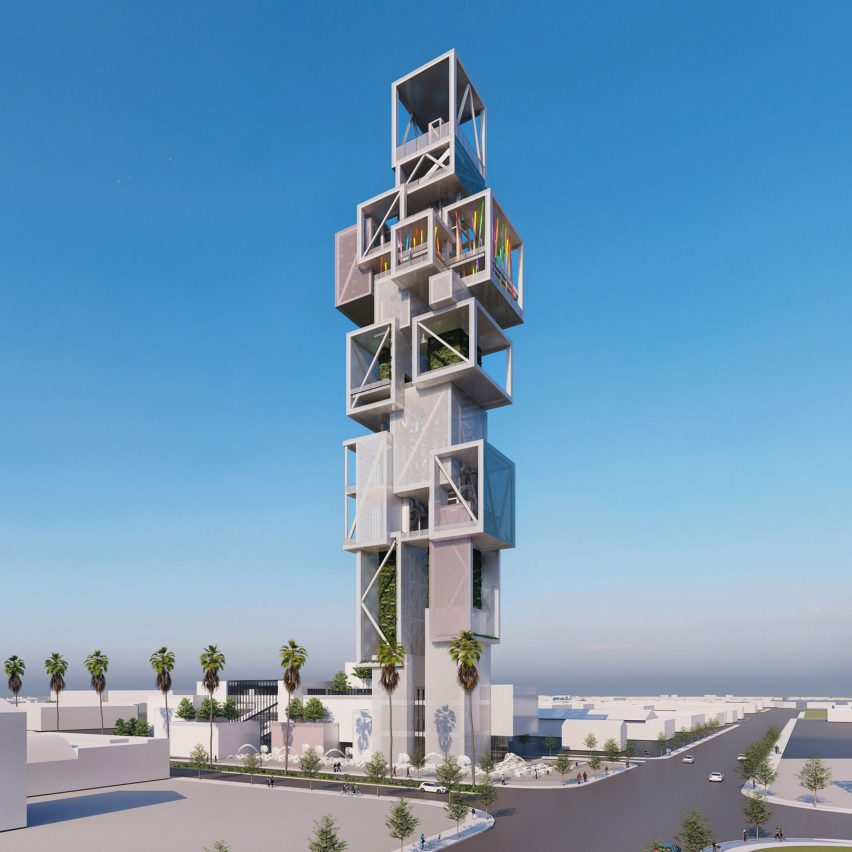 Diller Scofidio + Renfro, Studio Libeskind and MVRDV are among six teams that have revealed their competing proposals for a museum and memorial dedicated to the 2016 Pulse nightclub shooting in Orlando, Florida.

Heneghan Peng Architects, MASS Design Group and Coldefy & Associés with RDAI are also vying for the National Pulse Memorial & Museum. The project will commemorate victims of Pulse tragedy on 12 June 2016, when Omar Mateen opened fire on attendees at the nightclub killing 49 and injuring 68.

Pulse founder Barbara Poma formed non-profit One Pulse following the mass-shooting to raise funds for the permanent memorial on the site of the club at 1912 S Orange Avenue and an accompanying museum building a few blocks away, and launched the design contest earlier this year. 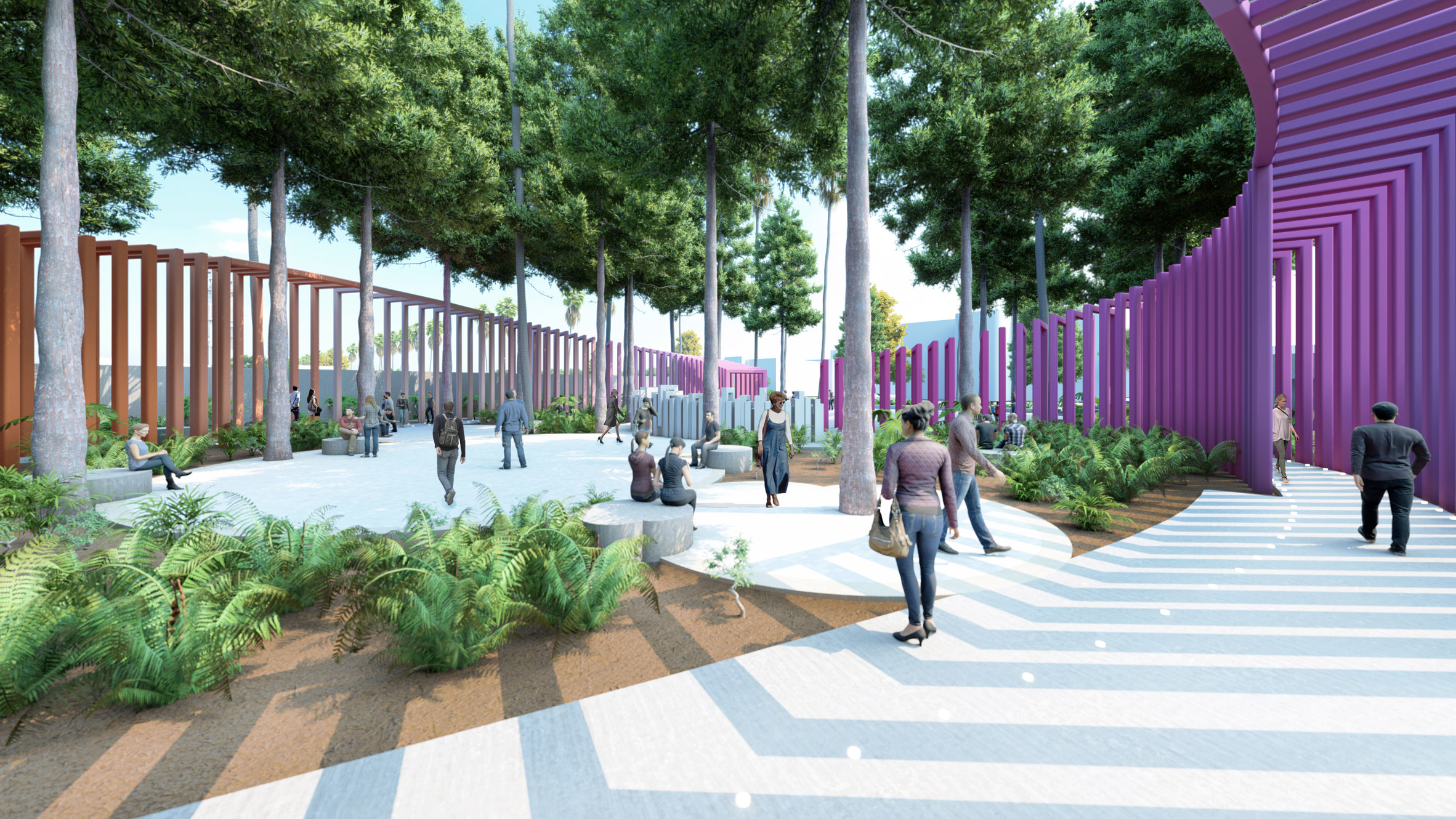 The existing structure is covered in bead screens, while 49 rainbow-colored ceramic tile columns protrude from the top. The structures support the roof of an extension above the club but also puncture through the roof of the old building to create lightwells

“They dance as they did that night, and ascend towards the sky, unbroken and strong, while physically supporting the roof and the floor,” said the firm. “Circular glass openings surrounding these columns open views down to see the original club and dance floor below while tinted glass skylights fill the space with shimmering colored light from above.” 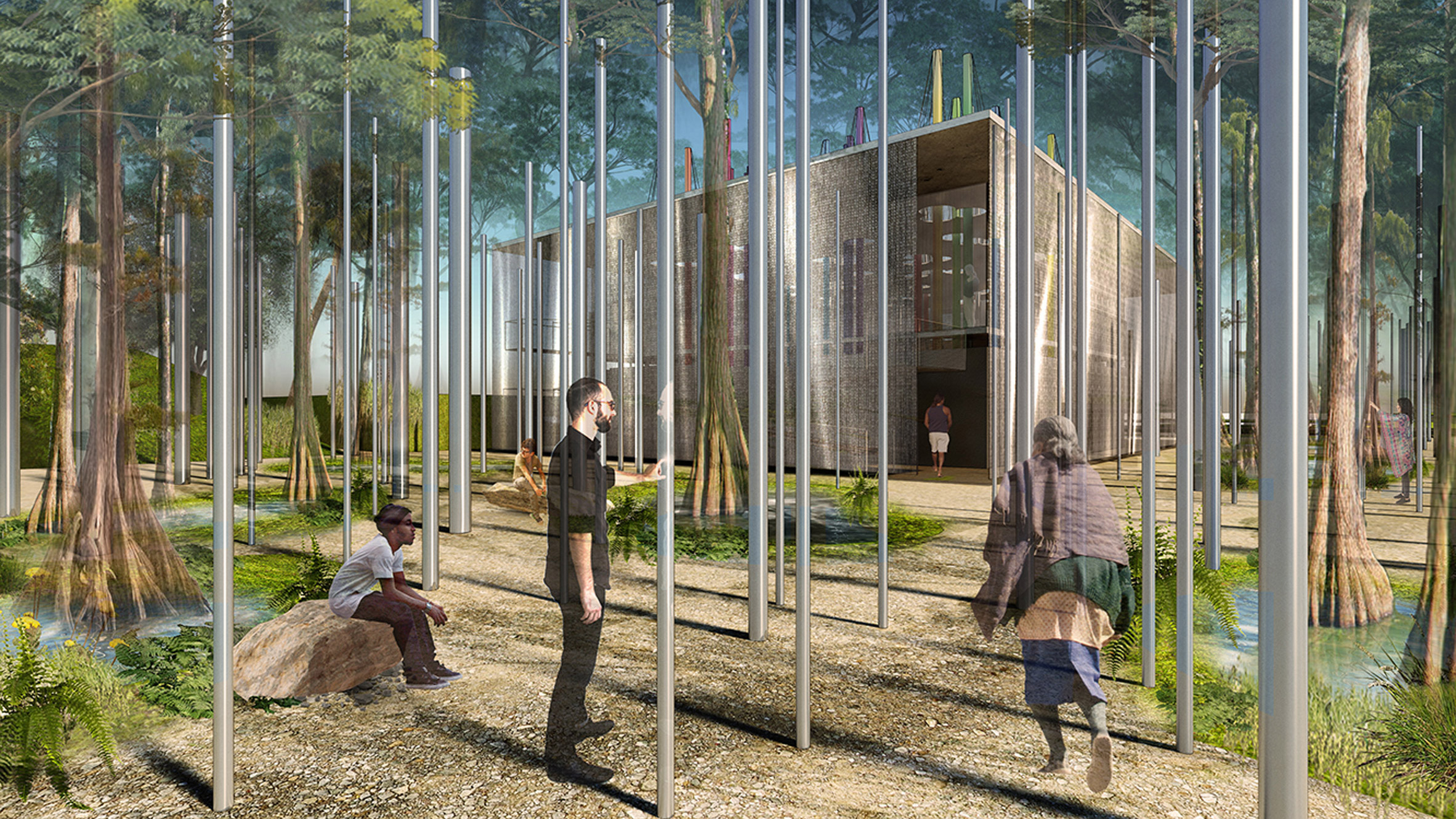 Completing the memorial proposal is an archive, tucked into greenery at the rear of the site. It is understood from the released footage that the museum will be located a few block from the memorial, and comprise a carpark topped by a green roof and towering structures.

The adjoining museum is a towering, irregularly stacked structure that is intended as a “gateway” to the Pulse district.

“It is a figure of hope that connects the terrestrial to the celestial as the tower ascends upward,” said the team. “It culminates in a pulsating rainbow beacon of 49 colored columns of light, activated by human touch.”

“The observation deck is a place to take in the entirety of the district and feel the eternal pulse of humanity,” it added. 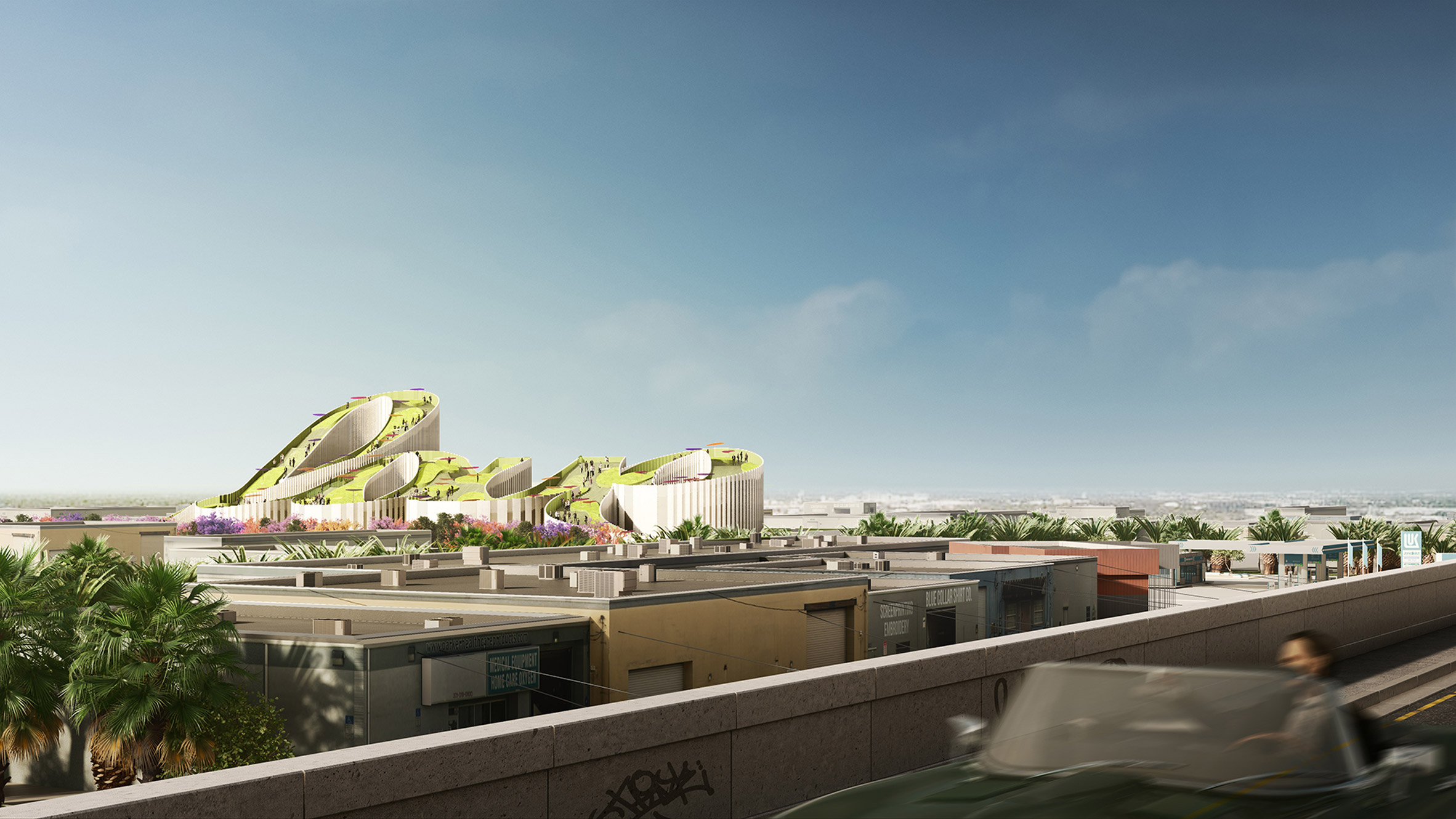 In MVRDV‘s typically playful style, the firm has designed the museum as green mounds that spell out “love”. Grassy mounds continue this theme on the site of the memorial and form the support for a “calm and stoic” black building balanced on top.

“Its black volume communicates a midnight quality, even in brilliant Florida sunshine, while gold accentuates the façade fractures,” said the team, which includes Amsterdam’s Studio Drift.

One Pulse launched the contest for design proposals in March this year, revealing the shortlist of six proposals was announced on 31 May featuring a number of high-profile firms. This is the first time that the proposals have been revealed.

OnePulse is exhibiting the designs at Orange County Regional History Center and online until 10 October, so the public can view them and provide feedback, ahead of a final scheme being chosen on 30 October. 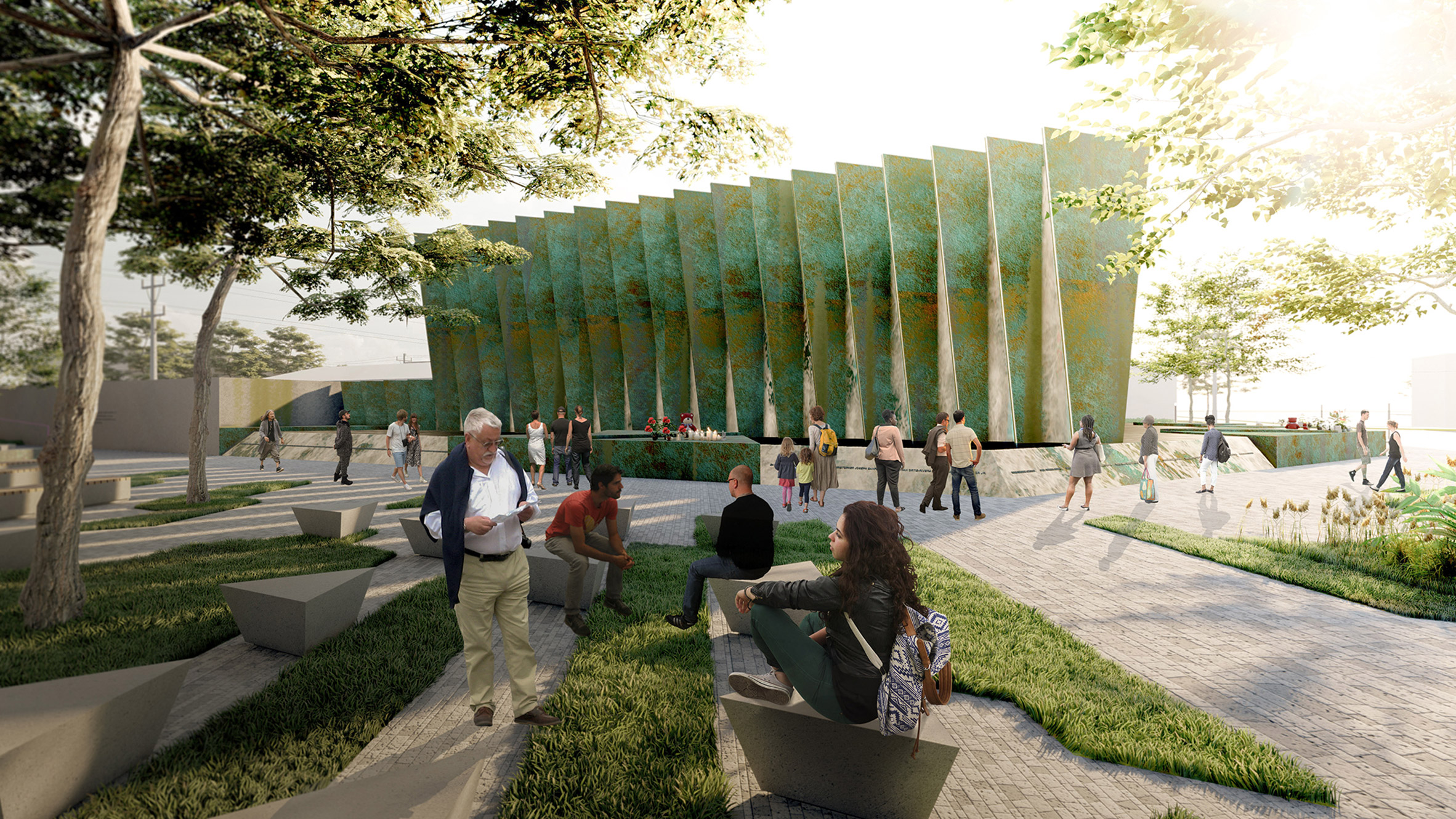 “Community involvement and engagement is at the core of everything we do,” Poma. “We invite the public to view the concept designs and share their feedback because their voice is essential in helping select the winning team.”

“The concept design viewing marks the next major milestone in the creation of the National Pulse Memorial & Museum, which will honor the 49 lives taken and pay tribute to all those impacted by the tragedy while ensuring that future generations never forget.”

The release of the design schemes comes months after a coalition of survivors from the shooting launched a protest against the project, which demanded the project be cancelled and that funds be given to help those suffering instead.