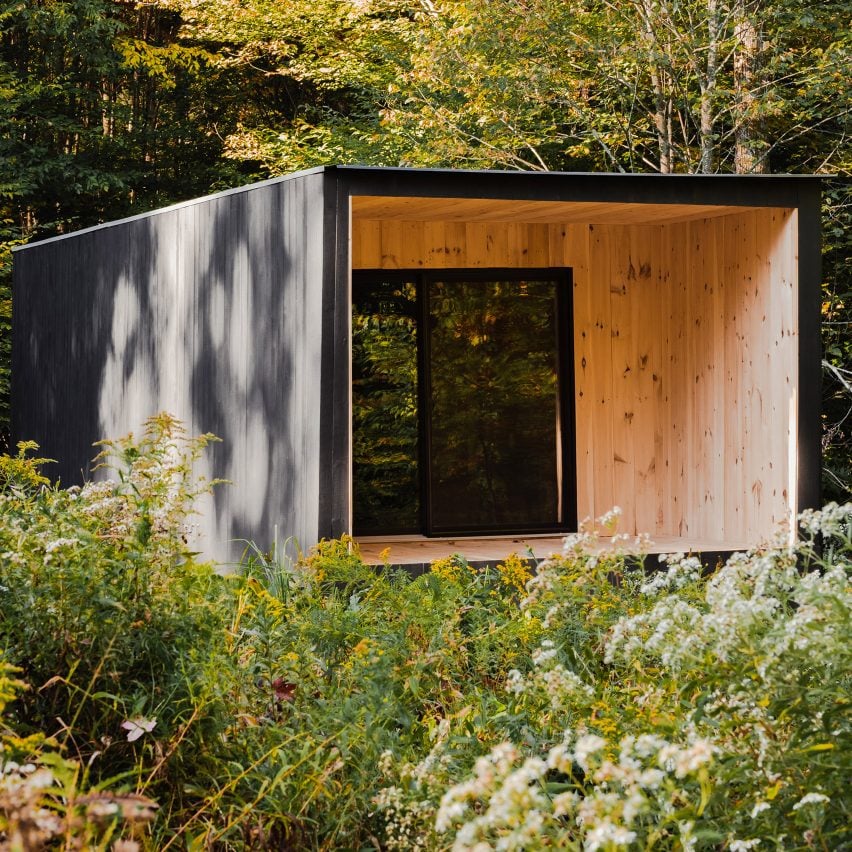 American designer Marc Thorpe has created a simple, off-the-grid dwelling in Upstate New York that is meant to exist “in perfect balance with its environment”.

Edifice was built in the small village of Fremont, which is a two-hour drive from New York City. The town is tucked into the scenic Catskill Mountains – a popular getaway for urban dwellers. 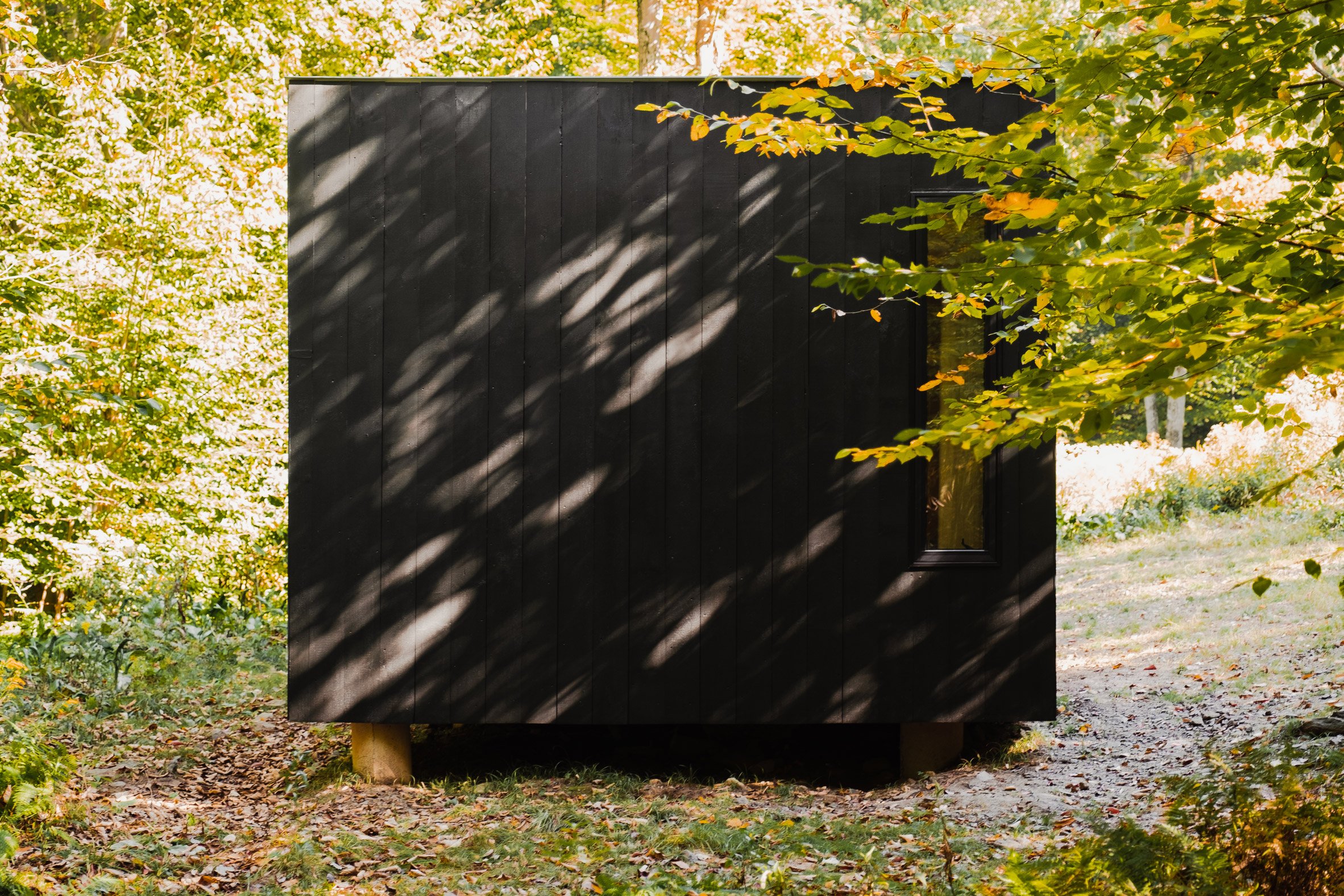 Marc Thorpe, who runs an eponymous Manhattan studio, designed the cabin to serve as a model for a proposed, 30-acre (12-hectare) nature retreat. Laced with walking trails, the development would encompass a mix of one- and two-bedroom cabins.

For the prototype, the designer created a one-bedroom version, which totals 500 square feet (46 square metres). The discreet cabin is nestled into a lush, wooded site.

“The building sits quietly among the trees, in perfect balance with its environment,” Thorpe said in a statement. 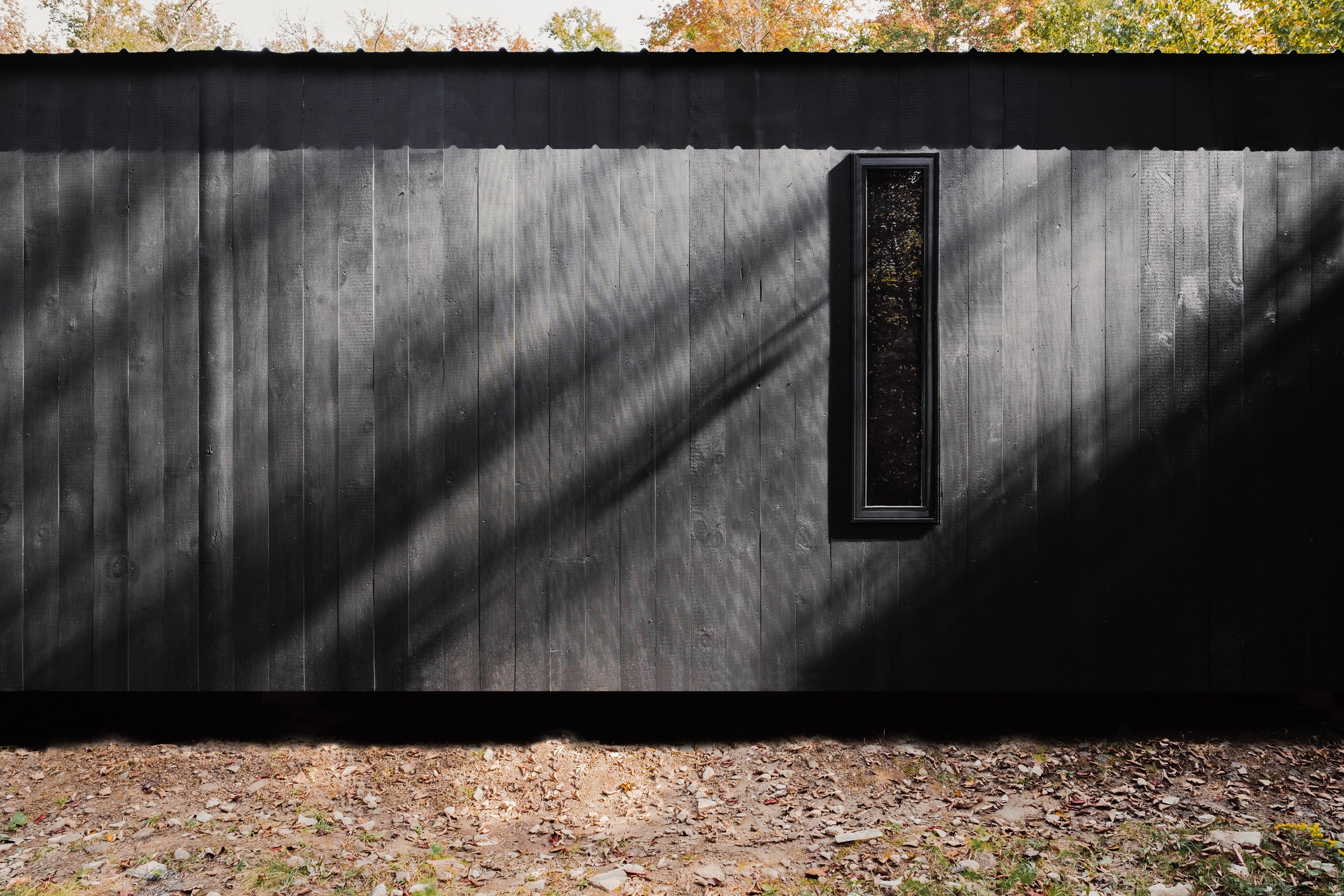 Thorpe took cues from 19th-century writers Henry David Thoreau and Ralph Waldo Emerson, who were important figures in the transcendentalist philosophical movement, which championed individualism and an appreciation for nature. Thorpe’s aim was to create a self-sustaining building that was an “exercise in reduction”.

“The cabin stands as an example of introverted architecture or neo-transcendentalism,” Thorpe said. “This is exhibited through its physical isolation, essentialist programming and self-sustaining infrastructure.” 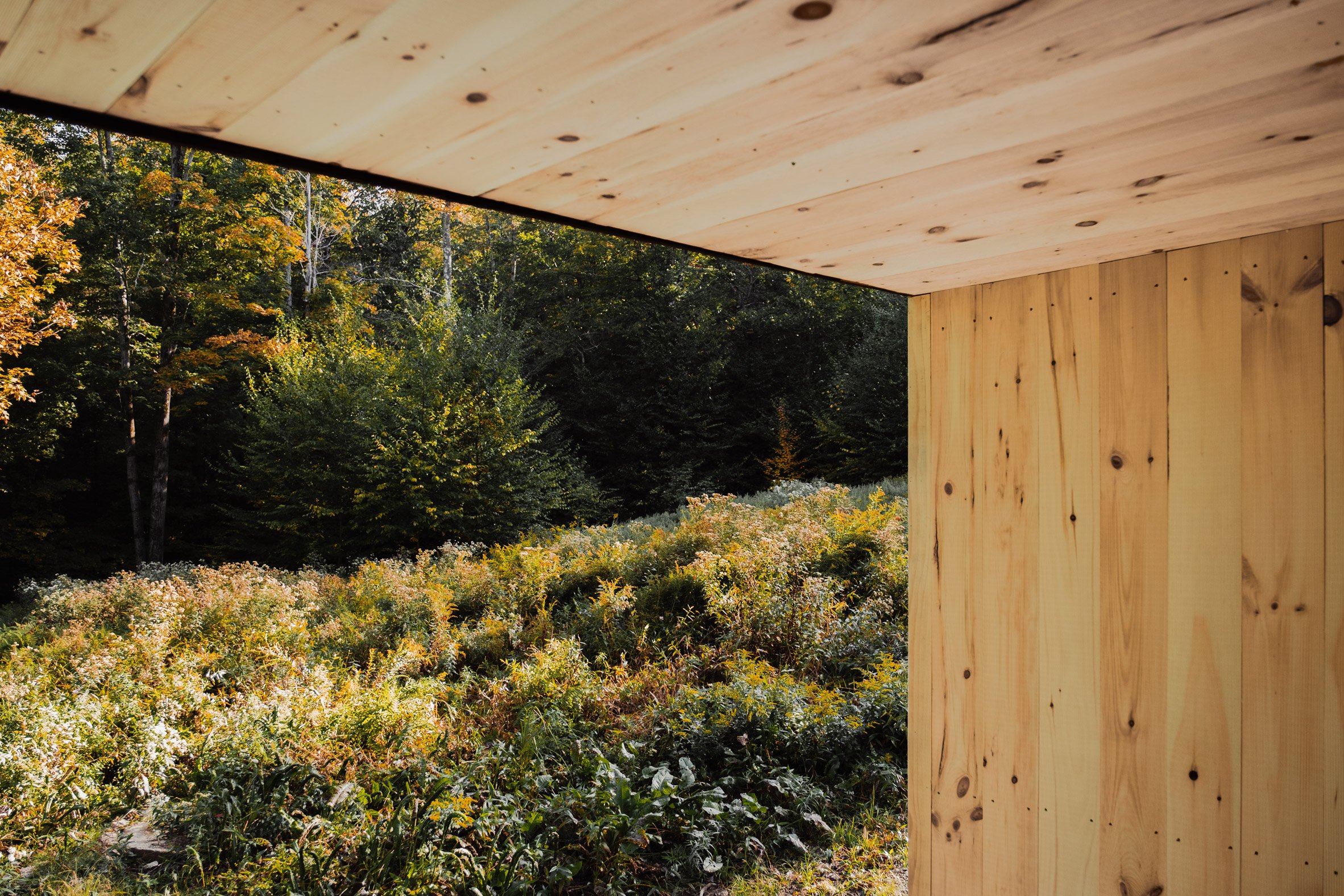 Rectangular in plan, the dwelling is a simple box clad in stained cedar. Limited openings enhance the cabin’s sense of enclosure and privacy.

The east elevation has no glazing, while the south and west walls have thin, vertical windows. The cabin opens up on the north, where the designer incorporated a glass wall and a recessed deck that subtly alludes to a farmhouse porch. 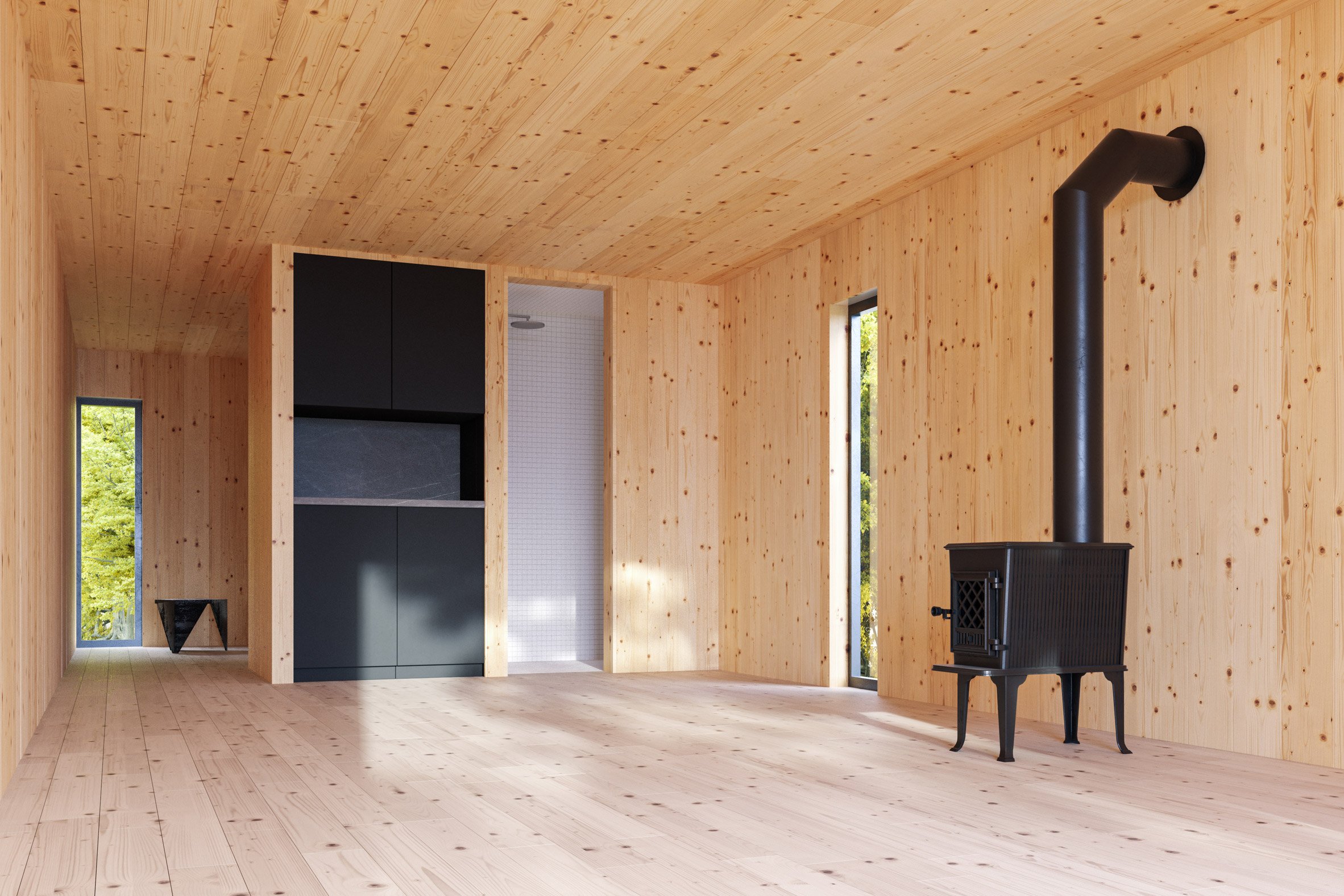 “Upon approach, the building offers no clear entry, as it remains undefined until physically engaged,” the designer said. “As in art, one must move around the work to understand it in relation to its context, revealing more of itself over time.”

Inside, the cabin encompasses four distinct zones – live, cook, dine and sleep. Adjacent to the deck is the lounge area, which flows into the dining and cooking space.

A service core containing a bathroom and storage separates the public zone from a compact bedroom. 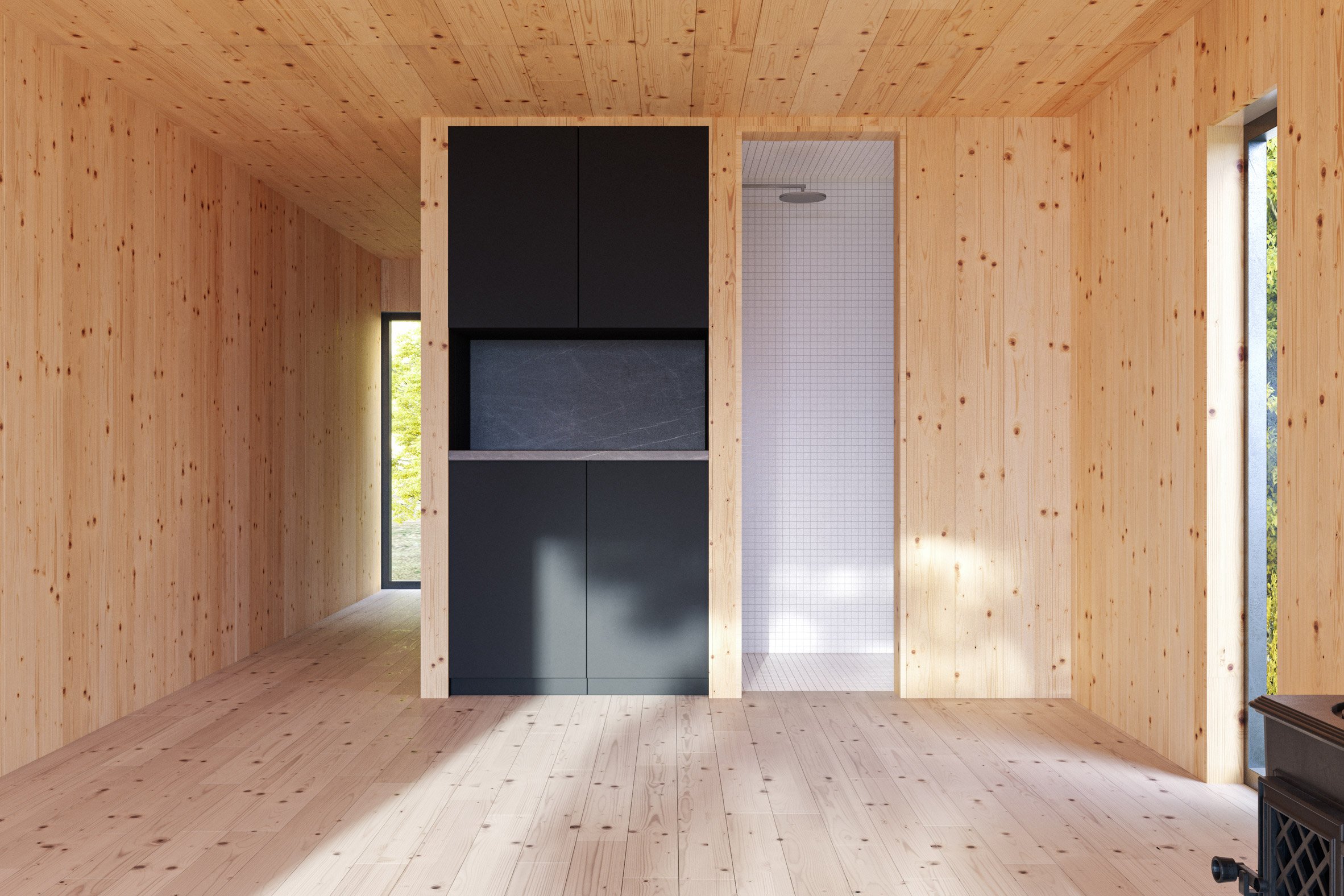 The building has been designed for off-the-grid living. A composting toilet, a rainwater collection system and a wood-burning stove are among the features that reduce reliance on public utilities. The design also features solar panels that help generate energy and heat water. Lighting is meant to be provided by candles.

“This architecture is systemically connected to the environment through sustainable technology and infrastructure,” Thorpe said. “The Edifice is an architecture of responsibility and respect for our environment and ourselves.” 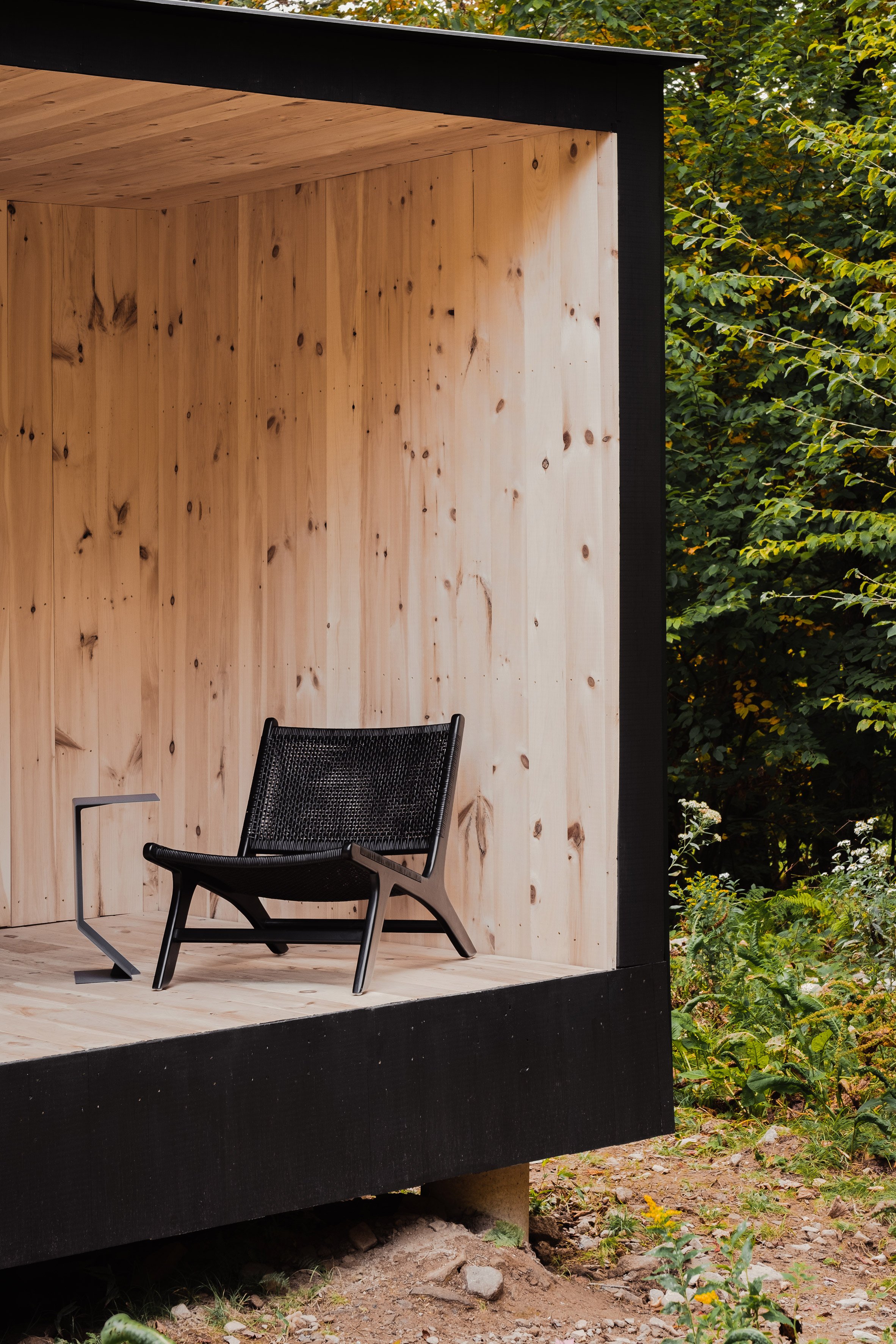 Since starting his practice in 2010, Thorpe has developed an extensive portfolio of products and architectural designs.

Earlier work includes a clubhouse for classic car enthusiasts in Manhattan, a chair for Moroso that was influenced by corn husks, and a draft beer dispenser for Stella Artois that was created for small restaurants and bars.

Photography is by Marco Petrini.

The post Edifice by Marc Thorpe is a black off-the-grid cabin in Upstate New York appeared first on Dezeen.

Masquespacio’s Wink chair is designed to resemble an eye