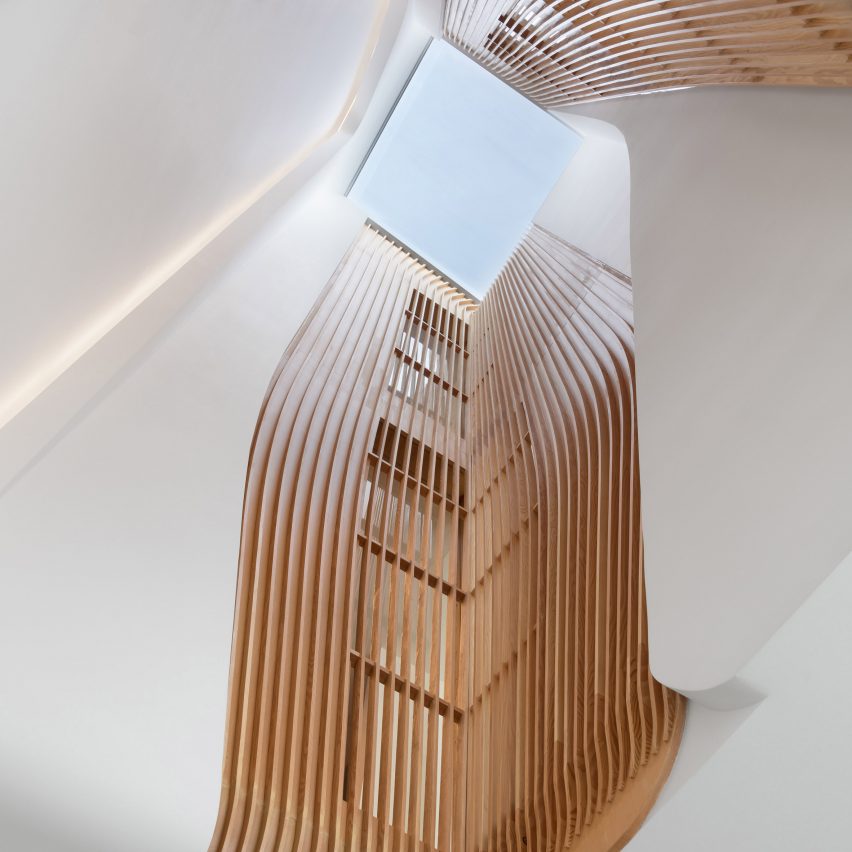 Flow Architecture and Maria Grazia Savito Architects have wrapped timber slats around the lightwell of a Victorian house conversion in Kensington, London.

Called Light Falls, the project involved the complete remodelling of a 19th century end-of-terrace, stacking its living spaces on top of each other to maximise natural light. 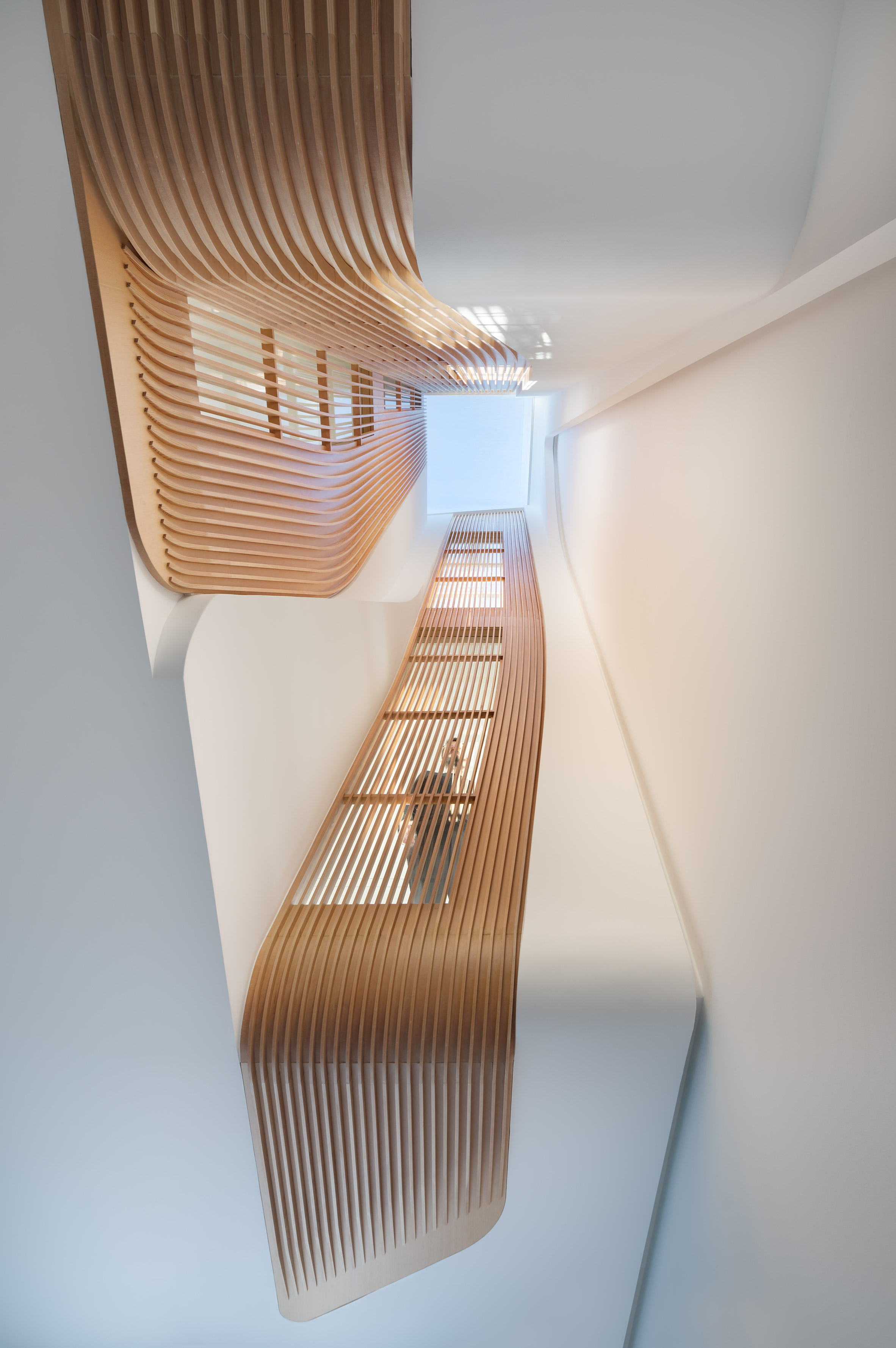 Due to its location in the Abingdon Conservation Area, any alterations to the original building were required to have a minimal impact.

Drawing on the form of a waterfall, the central lightwell is lined with slatted wooden openings that curve around to line the ceilings below. 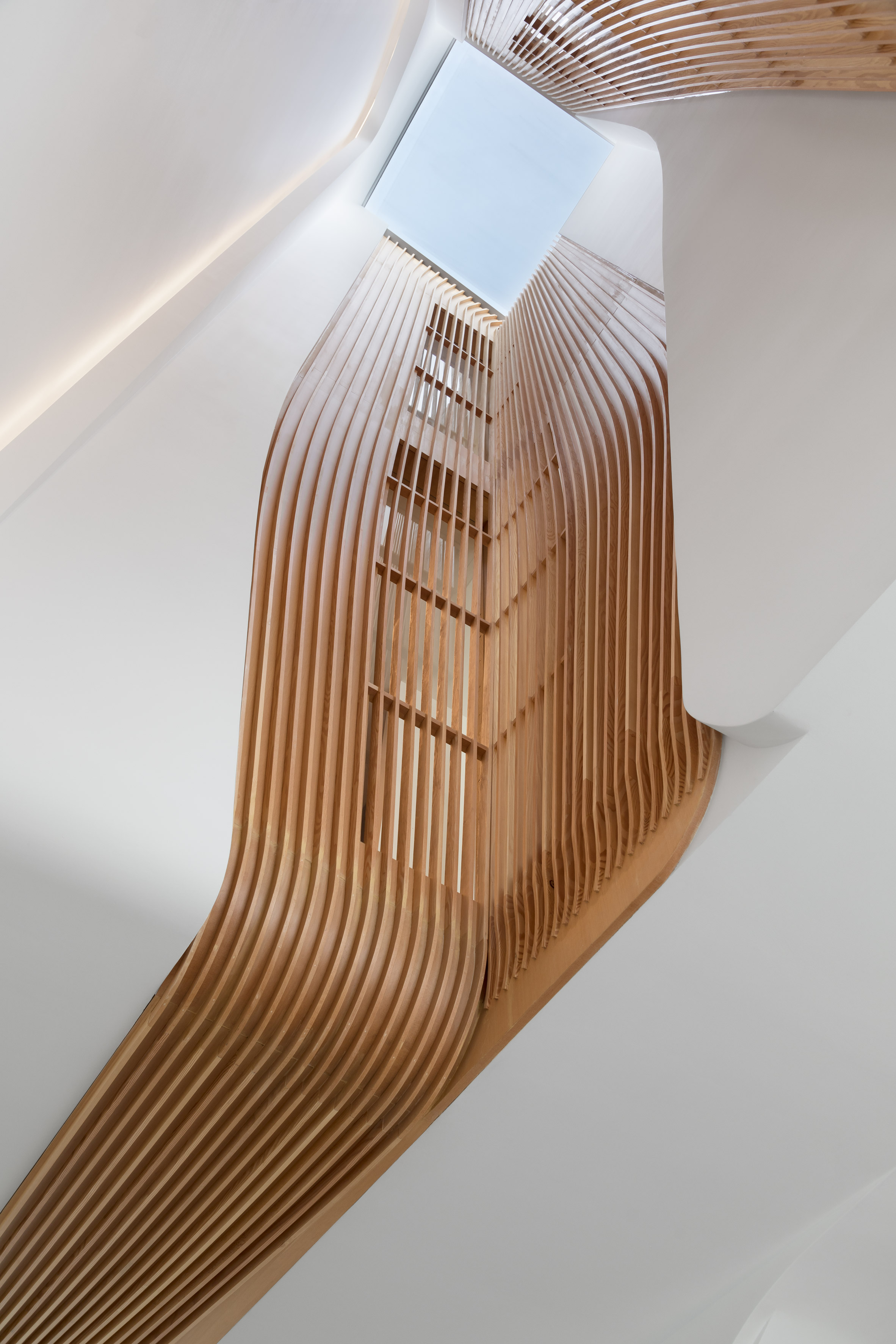 “The cascading effect of daylight, brought in vertical motion to the centre of the building, enlivens the interior spaces and dissolves the borders between indoor and outdoor spaces,” said the practice.

A rear extension with double-height glazing overlooks the garden. 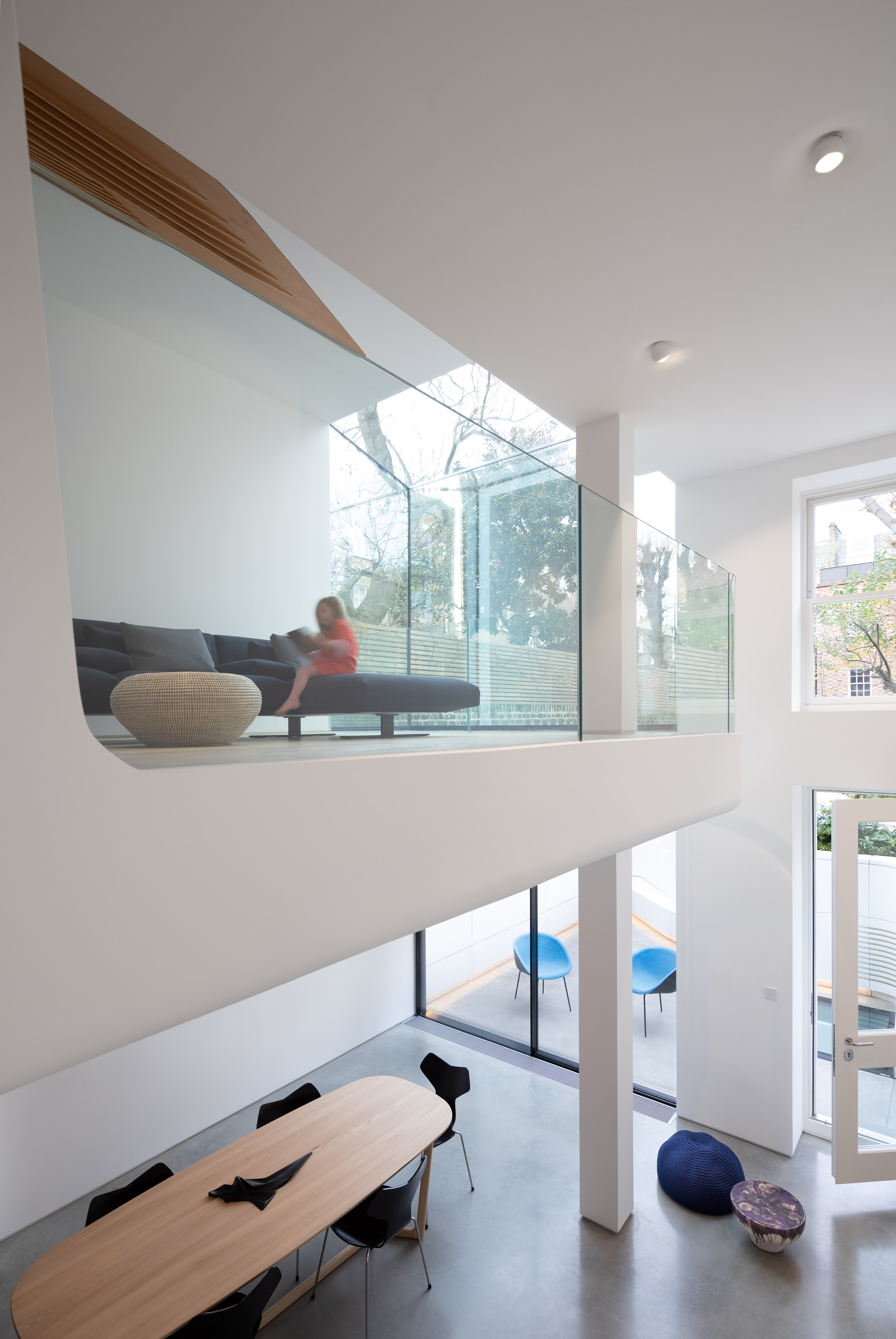 The ground floor area has been given over entirely to a large dining and kitchen area, overlooked by a living area above surrounded by a glazed balustrade.

Below, a new basement floor has been created, providing a secondary living area as well as a guest bedroom. 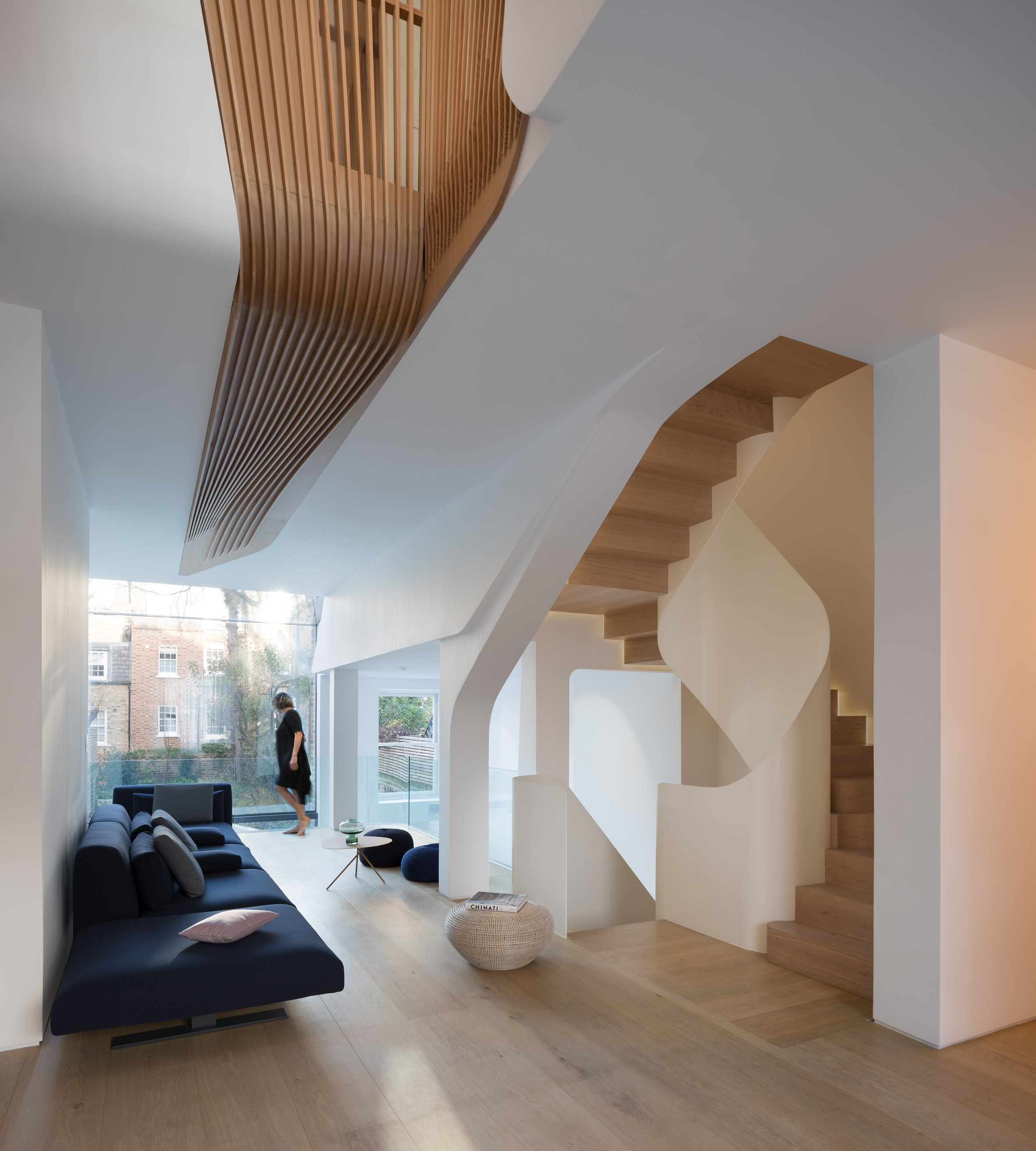 While the light well forms the centre of the home, an adjacent spiral staircase provides circulation

A twisting white balustrade and pale timber stairs designed to create sight-lines through the interiors. 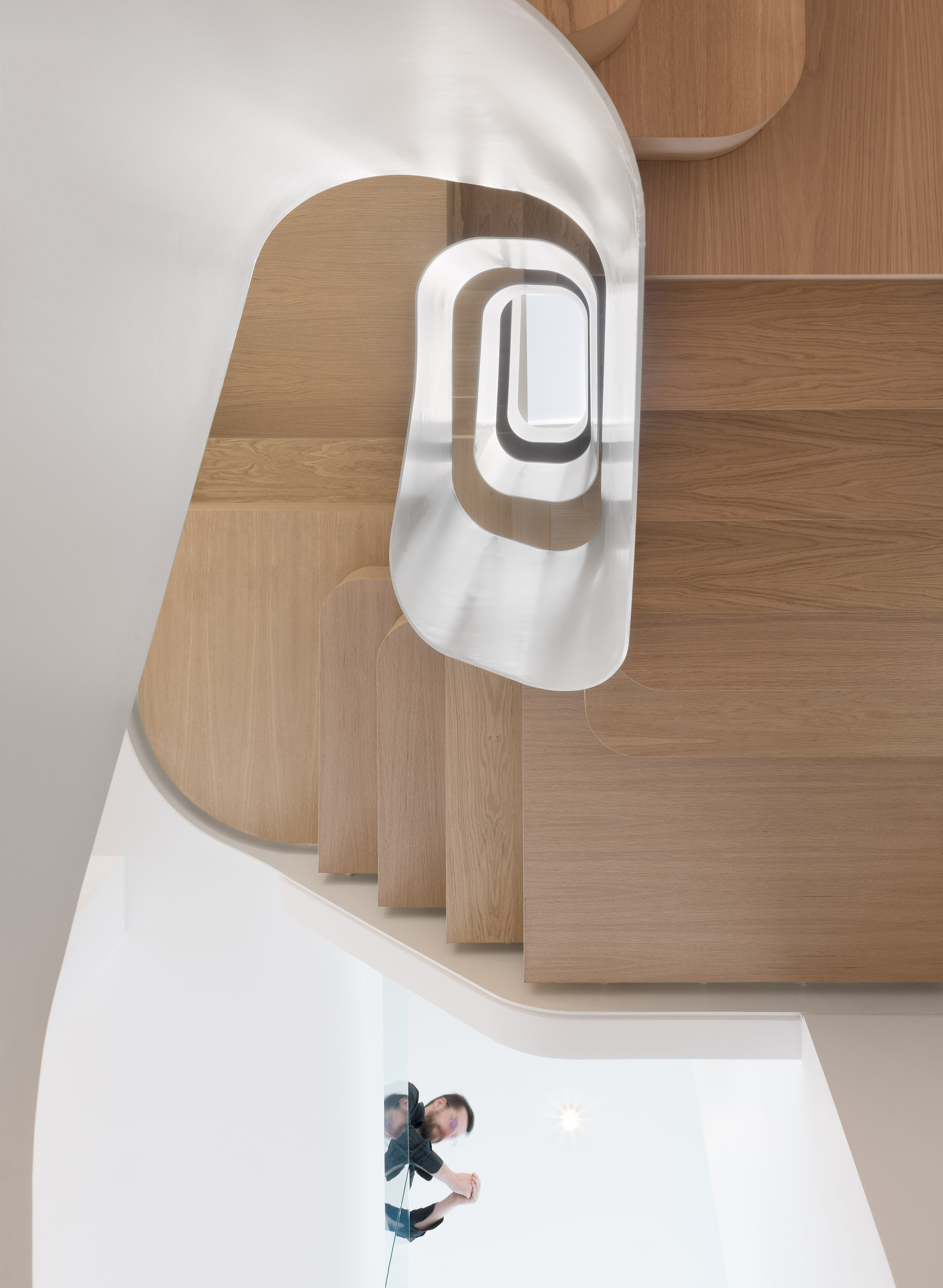 At the upper levels, the more secluded bedrooms overlook this light well through slatted timber openings, allowing in light while maintaining privacy.

At the rear of the home, glass reinforced concrete (GRC) panels curve out from the house to form a slightly sunken seating area. 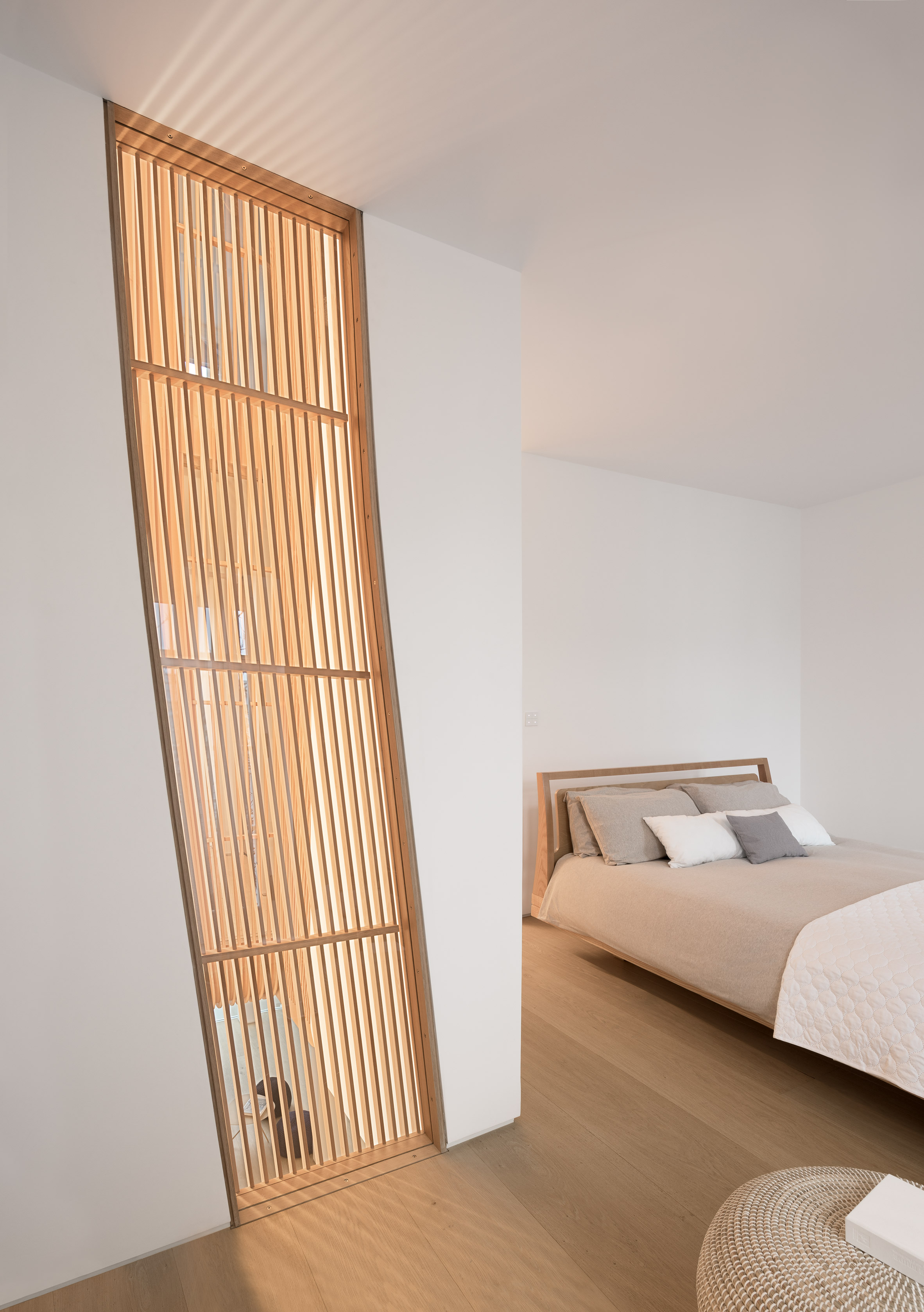 A bench wraps around a patio space, which has a walk-on skylight that illuminates the basement level below.

Steps lead up to a landscaped garden, cut through by a curving paved path ending in a small second patio.

This area is walled by a thin section of white GRC that also extends to create borders for planted beds. 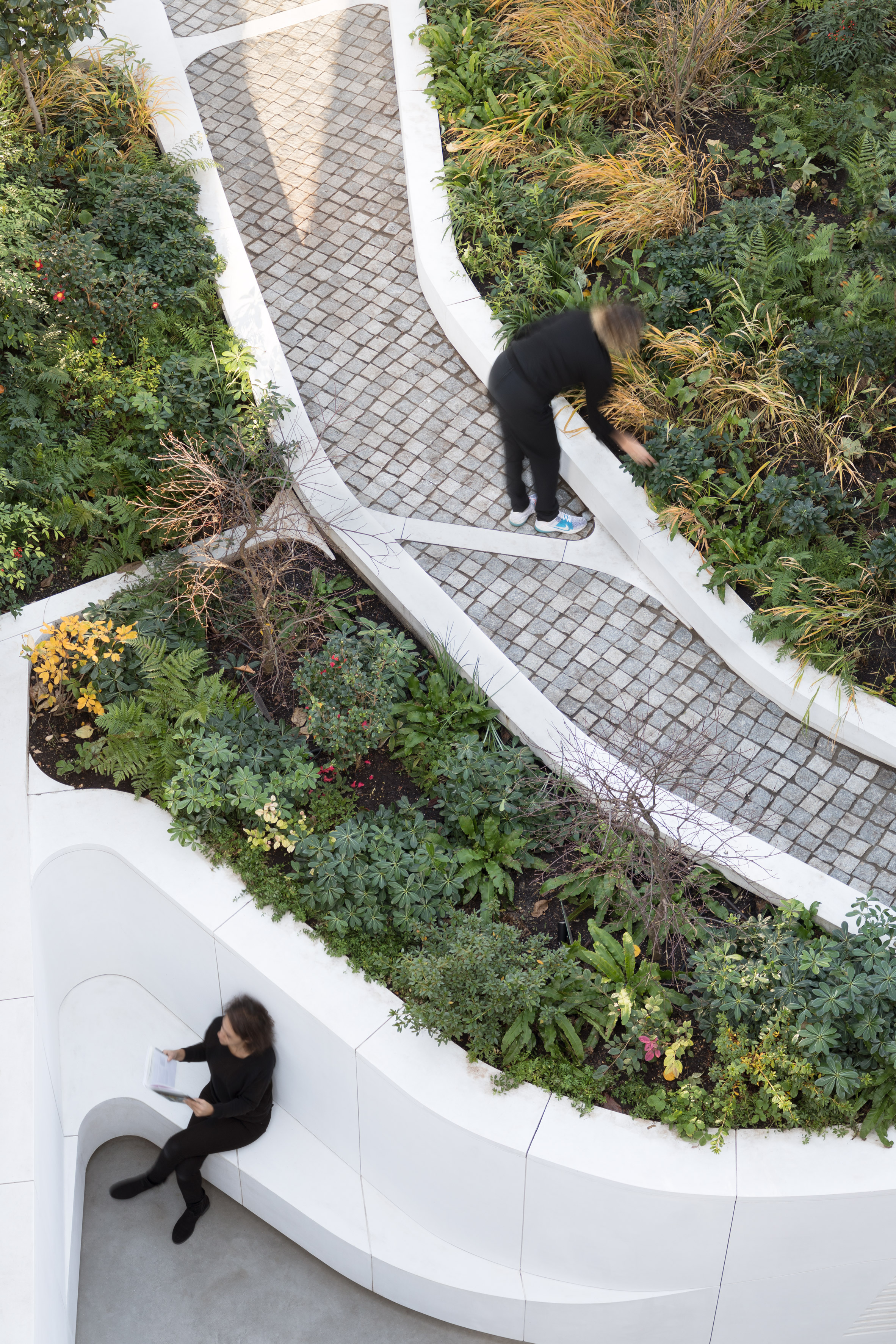 The house’s white interiors have been finished with a series of bespoke elements, such as curved wooden shelves and wall sections routed with graphic designs that mirror the flowing form of the stair.

Flow Architecture was founded in 2013 by Annarita Papeschi and Vincent Nowak, both of whom previously worked at Zaha Hadid Architects.

Other architects to use timber for the focal point of a house in London include Tsuruta Architects, who used 2,000 pieces of plywood to create a staircase for a 20th-century house, and an intricate staircase of Siberian larch designed by Waind Gohil and Potter Architects for a house in Shepherd’s Bush

Photography is by NAARO.