Industrial shed converted into skinny house and studio in Amsterdam 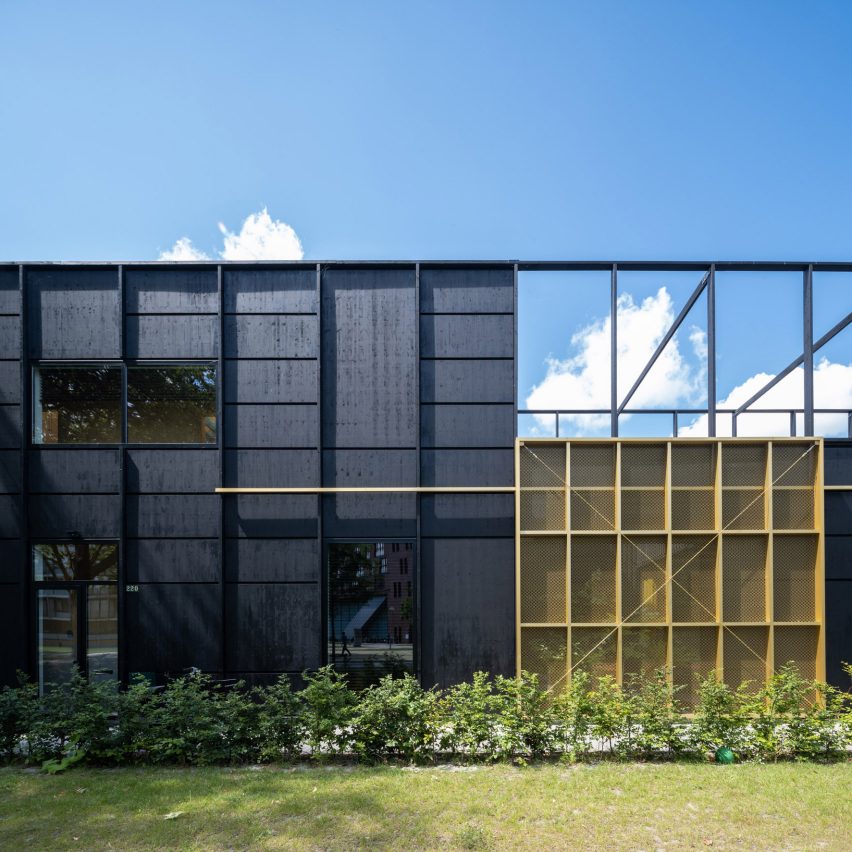 Parts of an industrial shack in Amsterdam have been incorporated into the 5-metre-wide Huis M&M, a residential conversion by NEXT Architects and architect Claudia Linders.

The original steel roof trusses of the shed have been reused to create the separate high-ceilinged studio space in the skinny house. 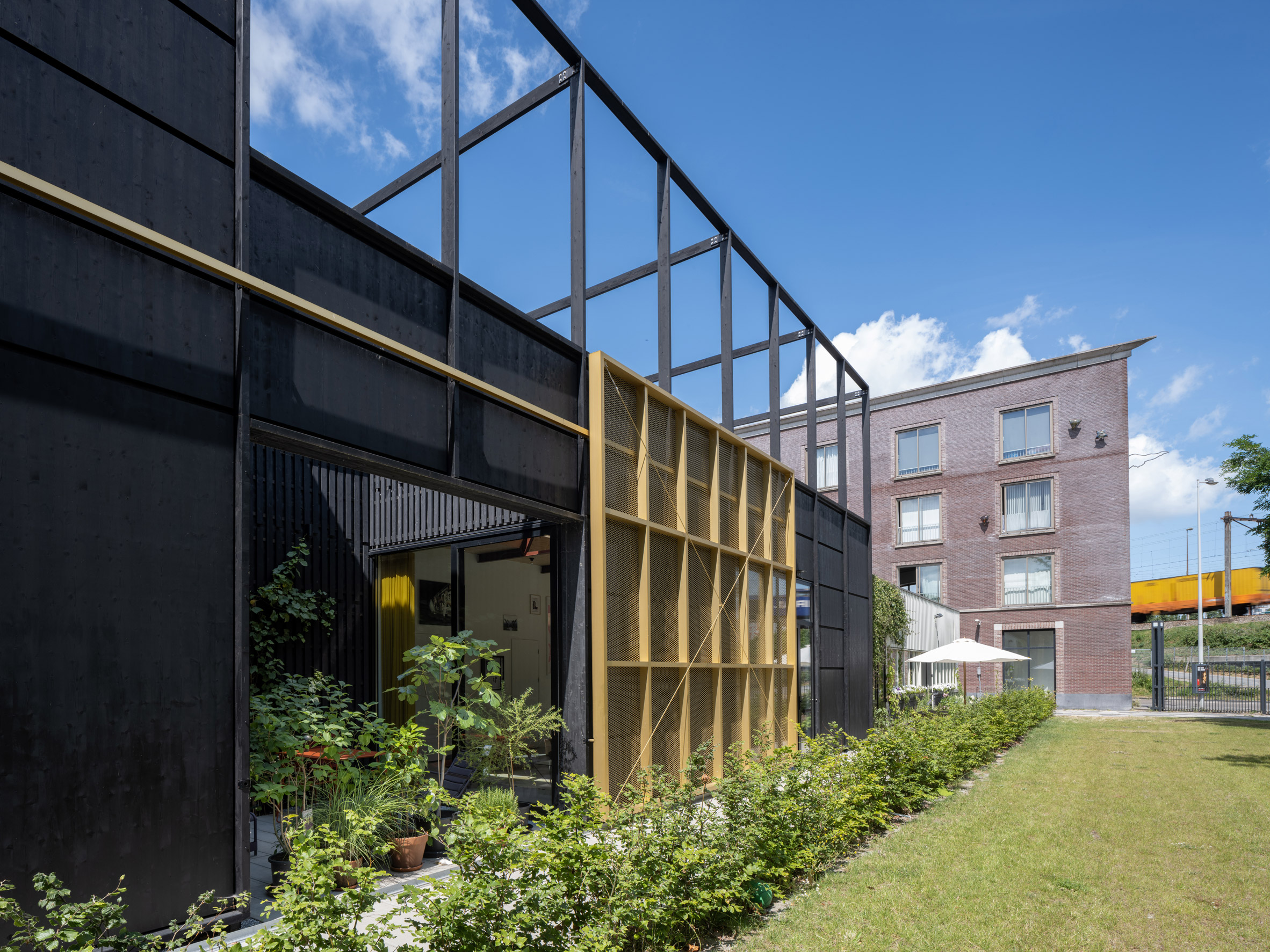 Huis M&M has a black steel frame, with a geometric, gridded facade clad with panels of black-stained wood. The industrial feel contrasts with the gold, anodised aluminium door.

“The sturdy materials that make up the facade and the steel skeleton of the building allude to the premises former function,” said NEXT Architects. 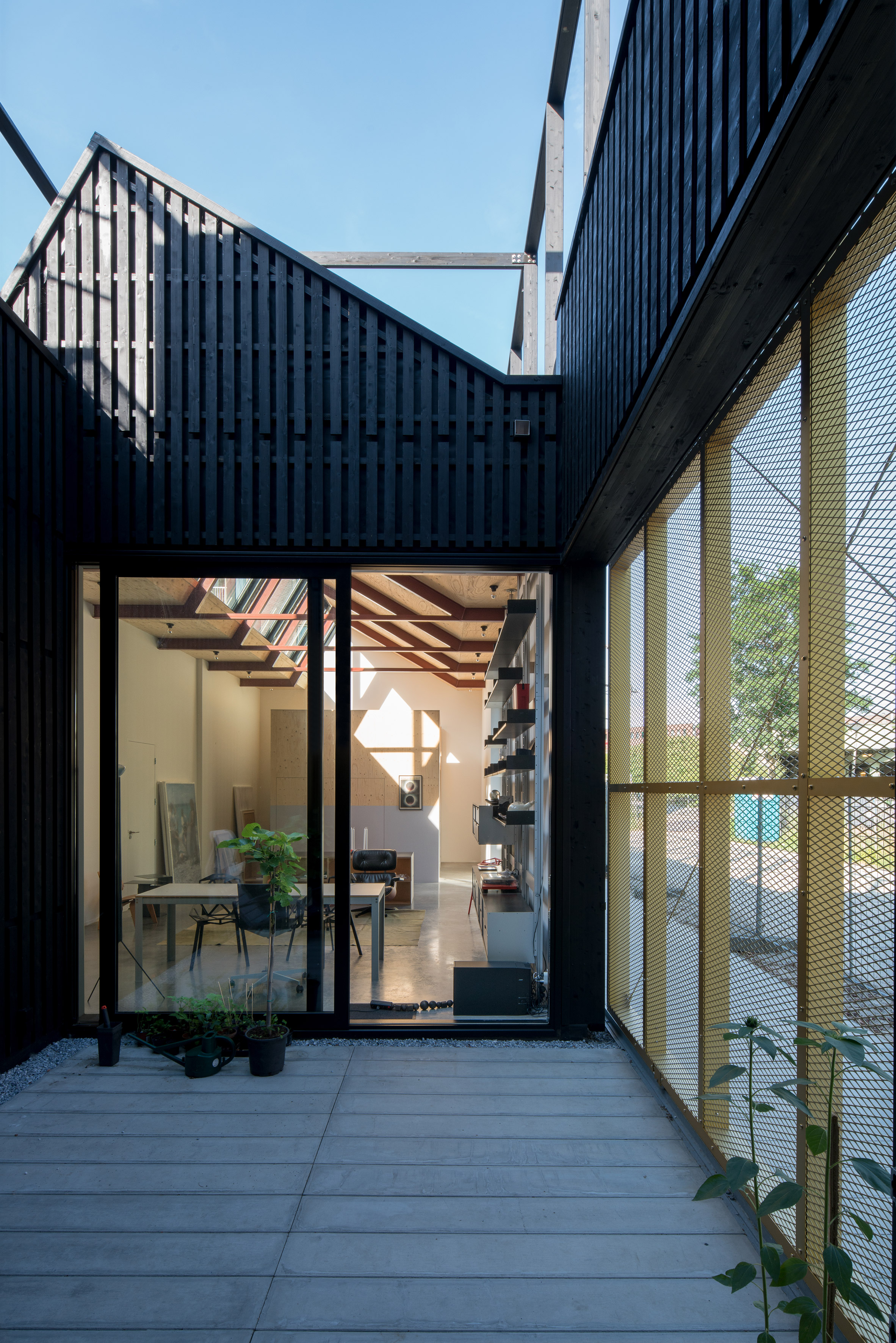 A sliding gold door allows a patio space to either be open or closed to the neighbourhood outside, and adds a kinetic visual element to the facade. 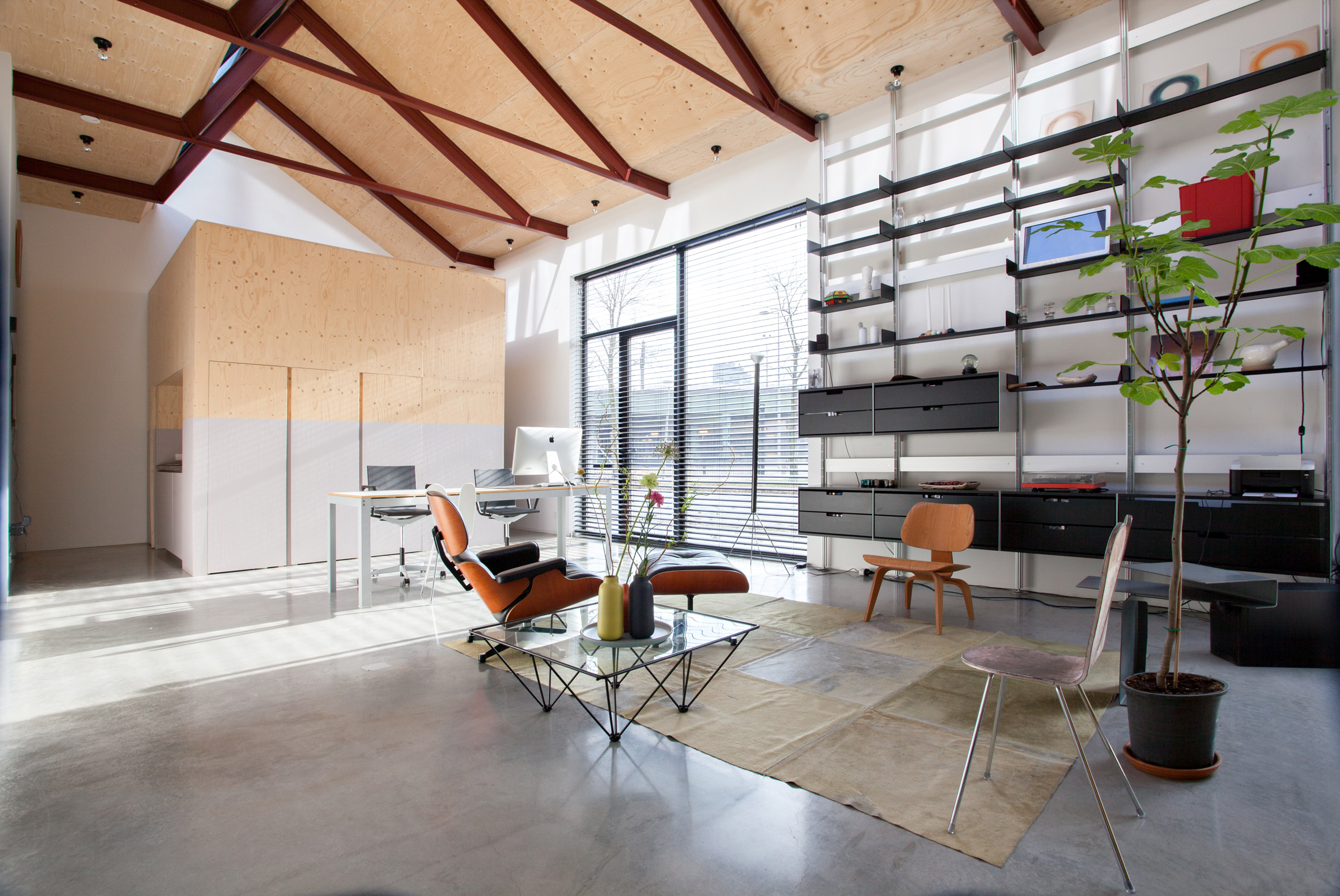 In the residential half of the house, a staircase leads up to a mezzanine, overlooking the patio and the studio’s roof.

Simple white walls an exposed timber have been used in the interiors. The lower section of the central wooden core has been painted with a grey datum, visually distinguishing its functional areas housing kitchen counters and cabinets. 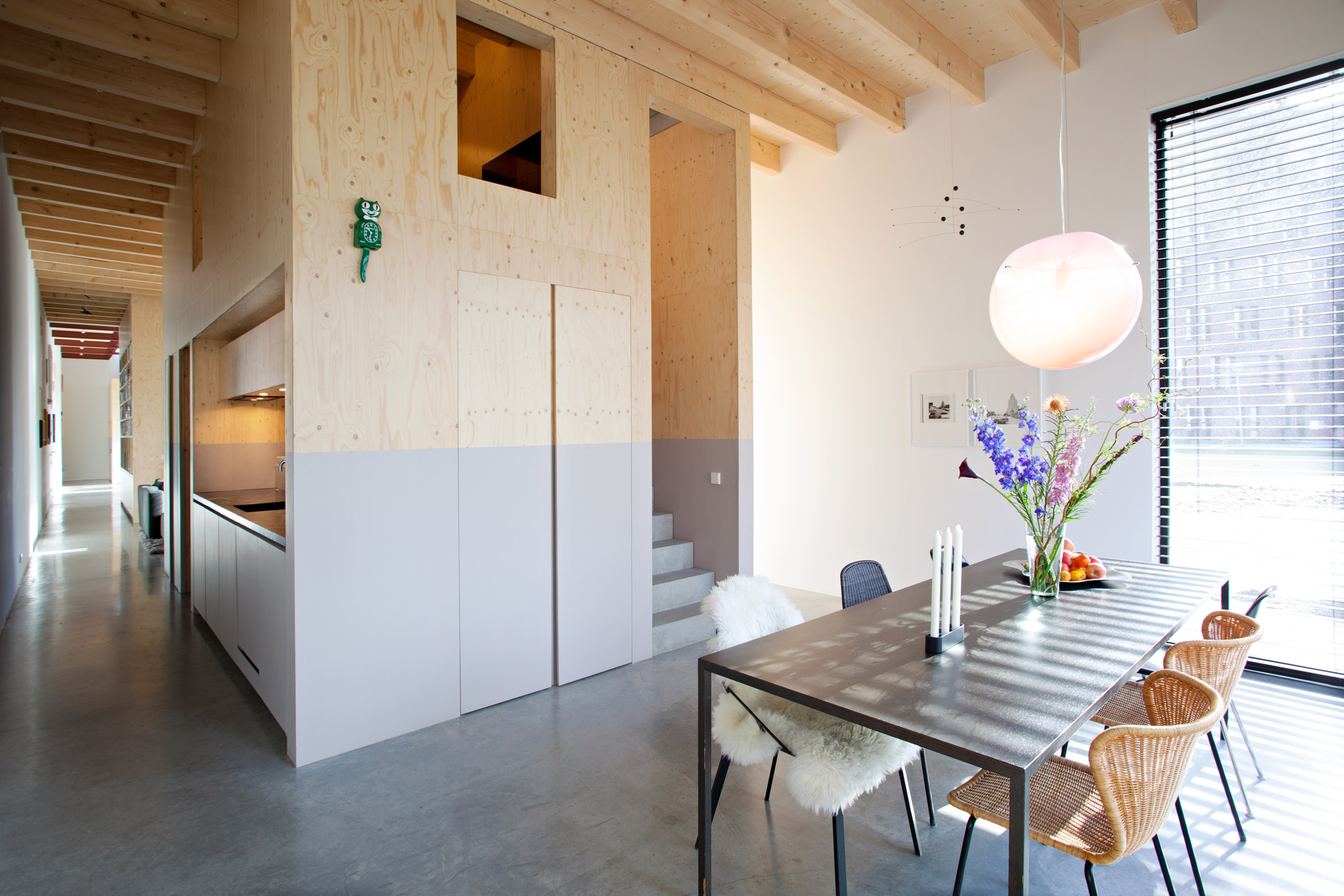 Large openings have been strategically place to prevent the home’s narrow corridor spaces, which run along the edges of the core from becoming too dark.

In the dining area at the western end a corner window has been introduced for more light. 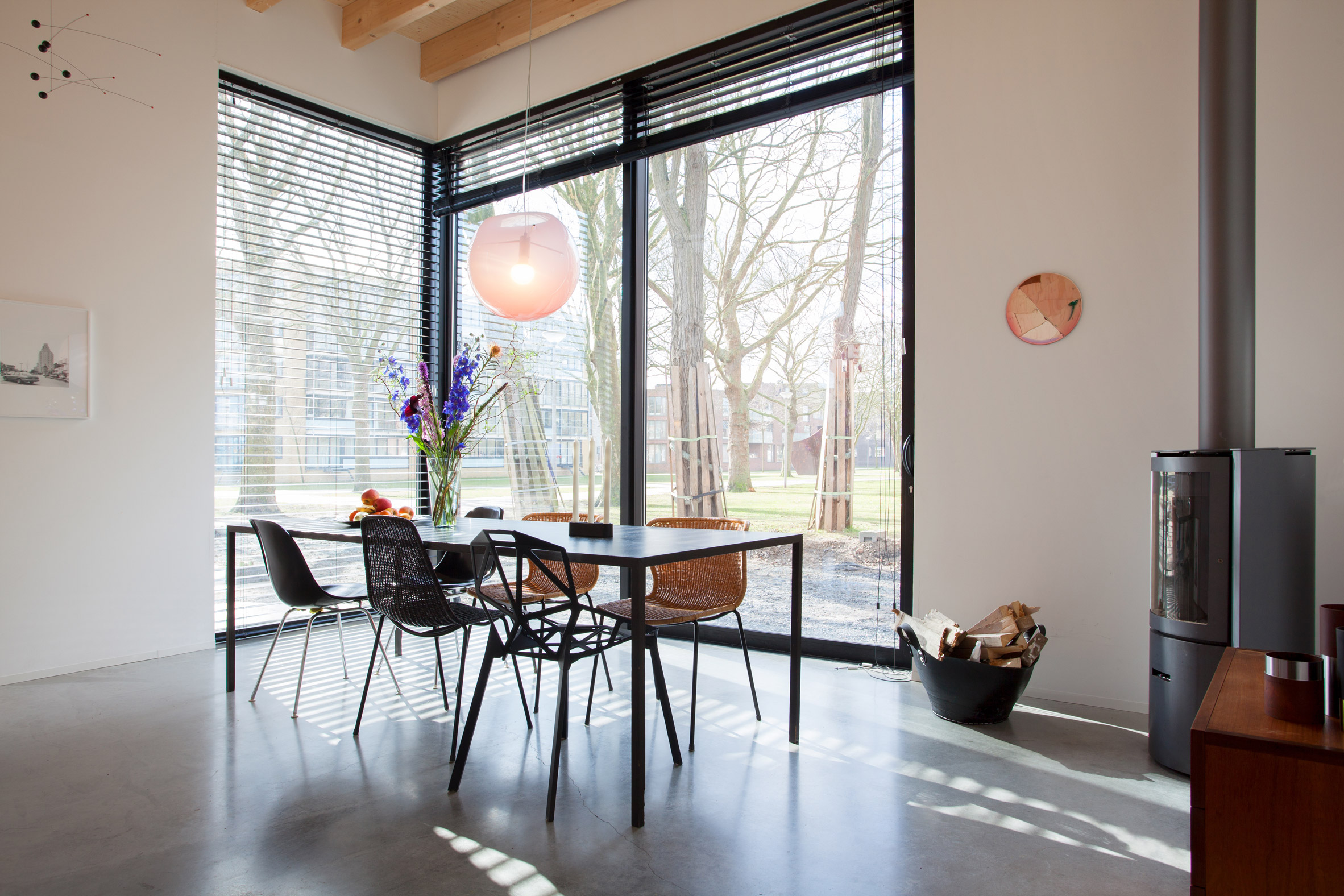 NEXT Architects, which was founded in 1999,  has office in both The Netherlands and China, and their recent projects include a series of playful pedestrian bridges in Carisselande near Rotterdam, Monster in South Holland and Changsha, China.

Old industrial sheds and warehouses are often ripe for conversion, such as a warehouse in Sydney that has been converted into a house complete with a home laboratory and classic car garage.

Photography is by Claudia Linder.

The post Industrial shed converted into skinny house and studio in Amsterdam appeared first on Dezeen.

Day of the Dead Halloween Porch