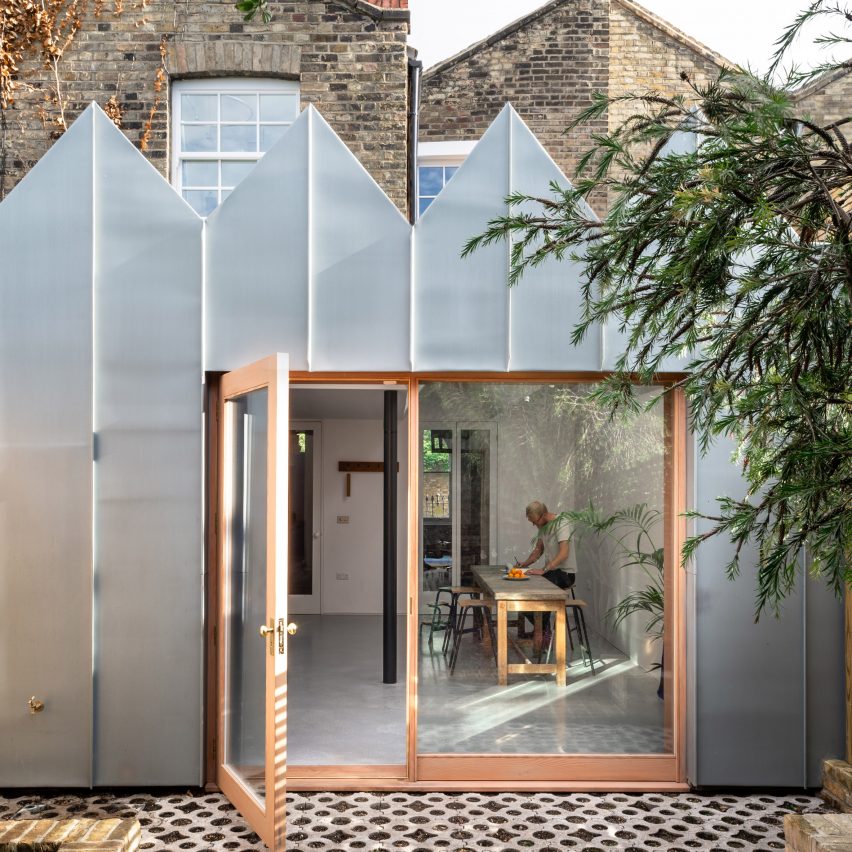 A zigzagging zinc facade and a bright blue kitchen are part of an extension to a house in London‘s Albion Terrace, designed by architecture studio Outpost.

Called Albion Terrace, the project is located in the Albion Square Conservation Area in Haggerston. Outpost extended and restored the Victorian terrace from the 1840s that was in need of modernisation and repair. 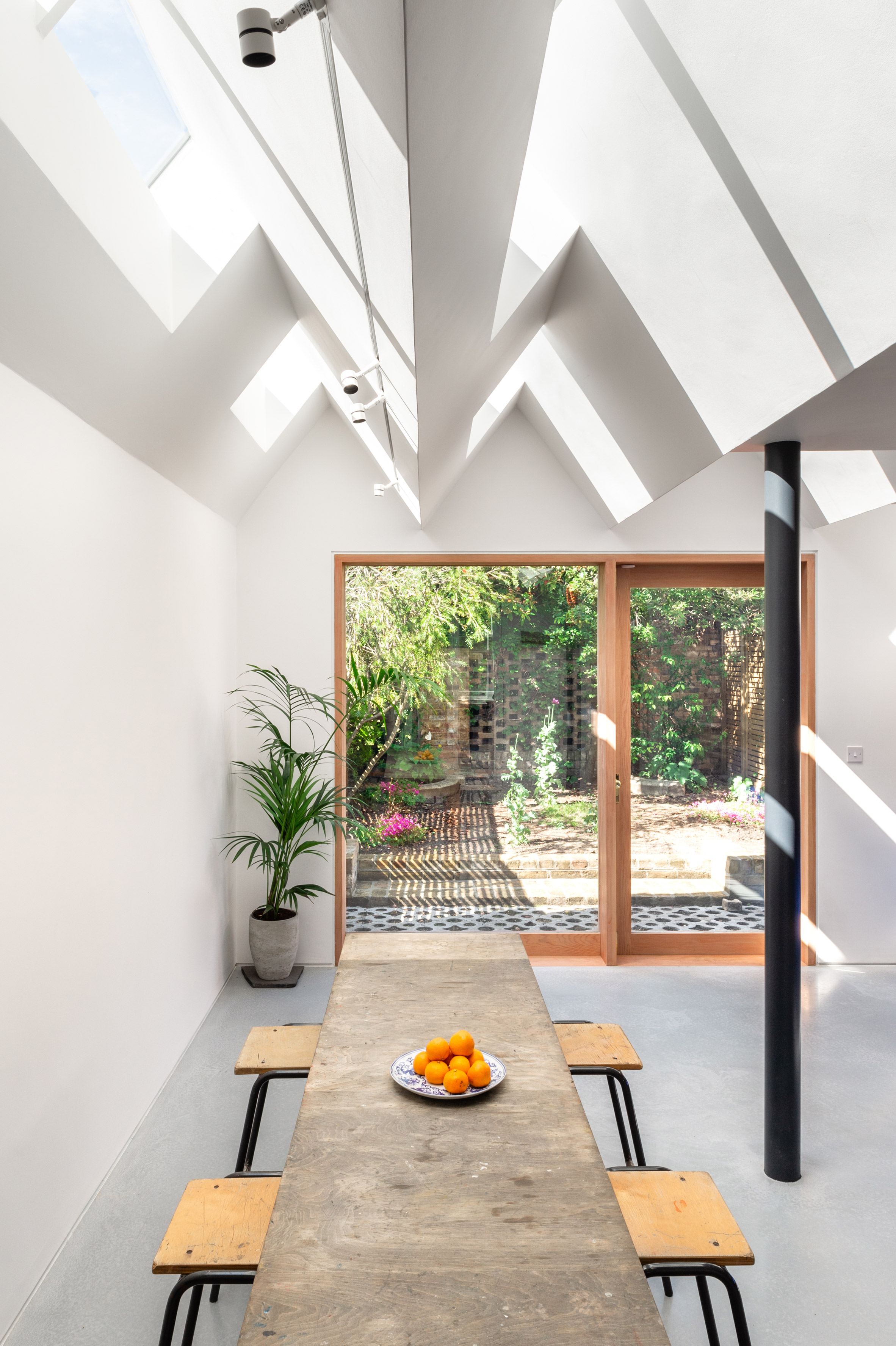 Following the constraints of the site, the single-storey extension projects outwards at the rear of the home. The new part matches the width of the original building, creating a kitchen and living area that opens out onto the garden.

Zinc cladding provides a dramatic silver contrast to the brick terrace. A large door and window with Douglas fir frames open to the garden. 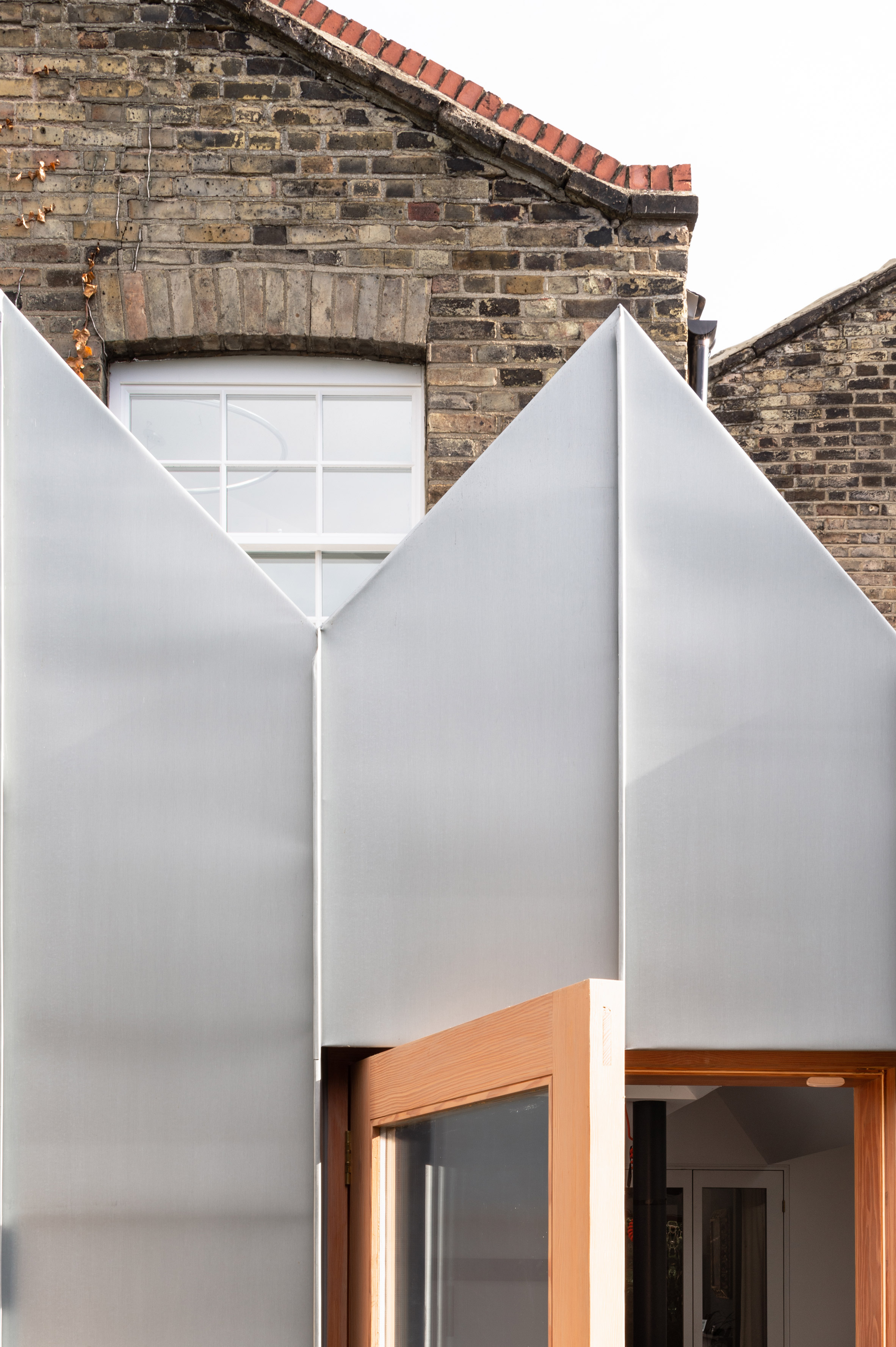 The kitchen has cobalt blue counters that match the house’s front door.

To create what the practice called a “beautiful internal ceiling-scape”, the roof is formed of four long, narrow pitched-roof sections. The result is a distinctive exterior appearance that maximises the feeling of vertical height inside. 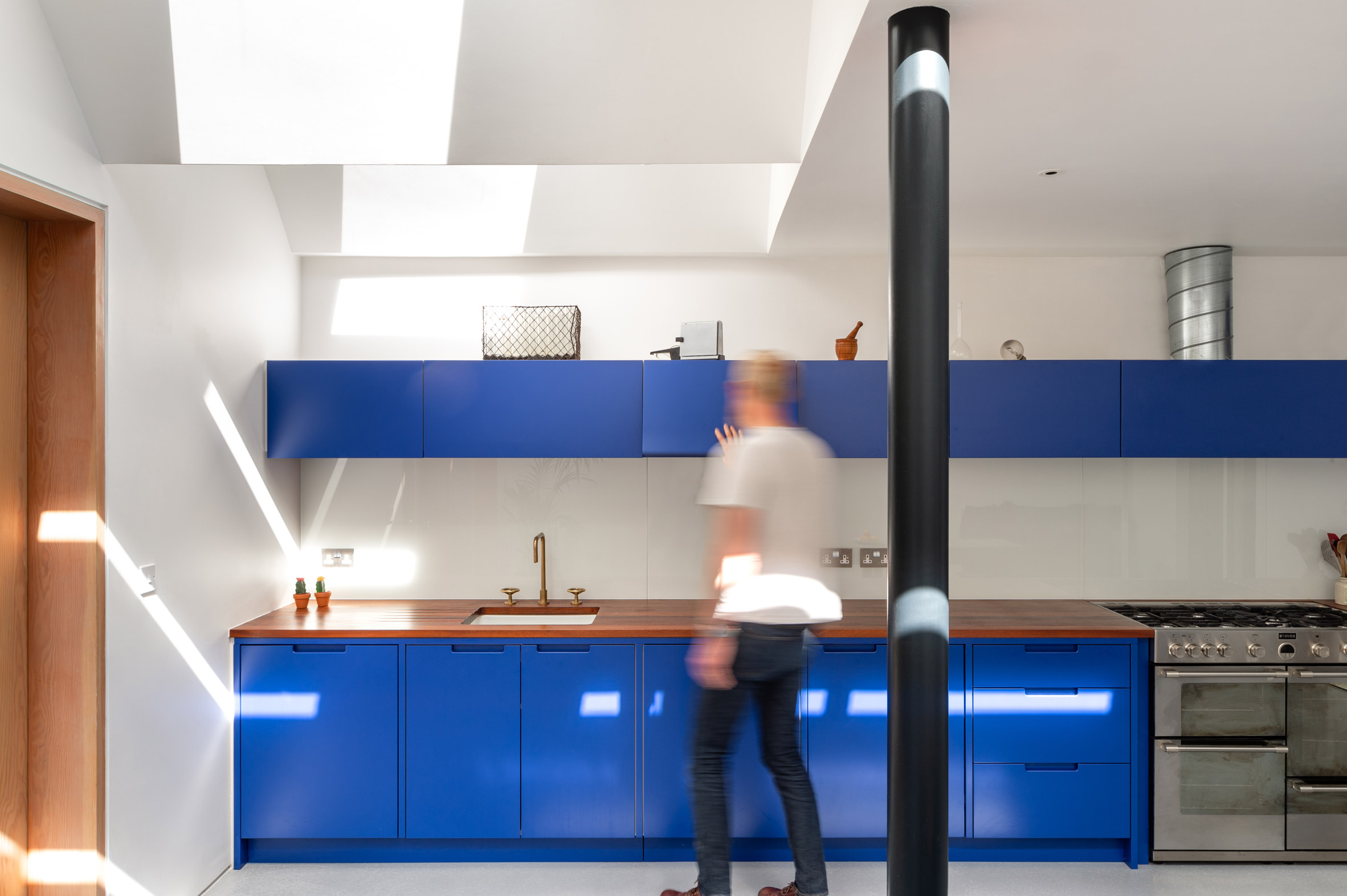 “Narrow west-facing roof lights pick up the movement of the late afternoon but do not allow excessive heat gain,” explained the studio.

These skylights in each roof section create a changing scene of natural light throughout the day, casting patches of sun and shadow across the space. 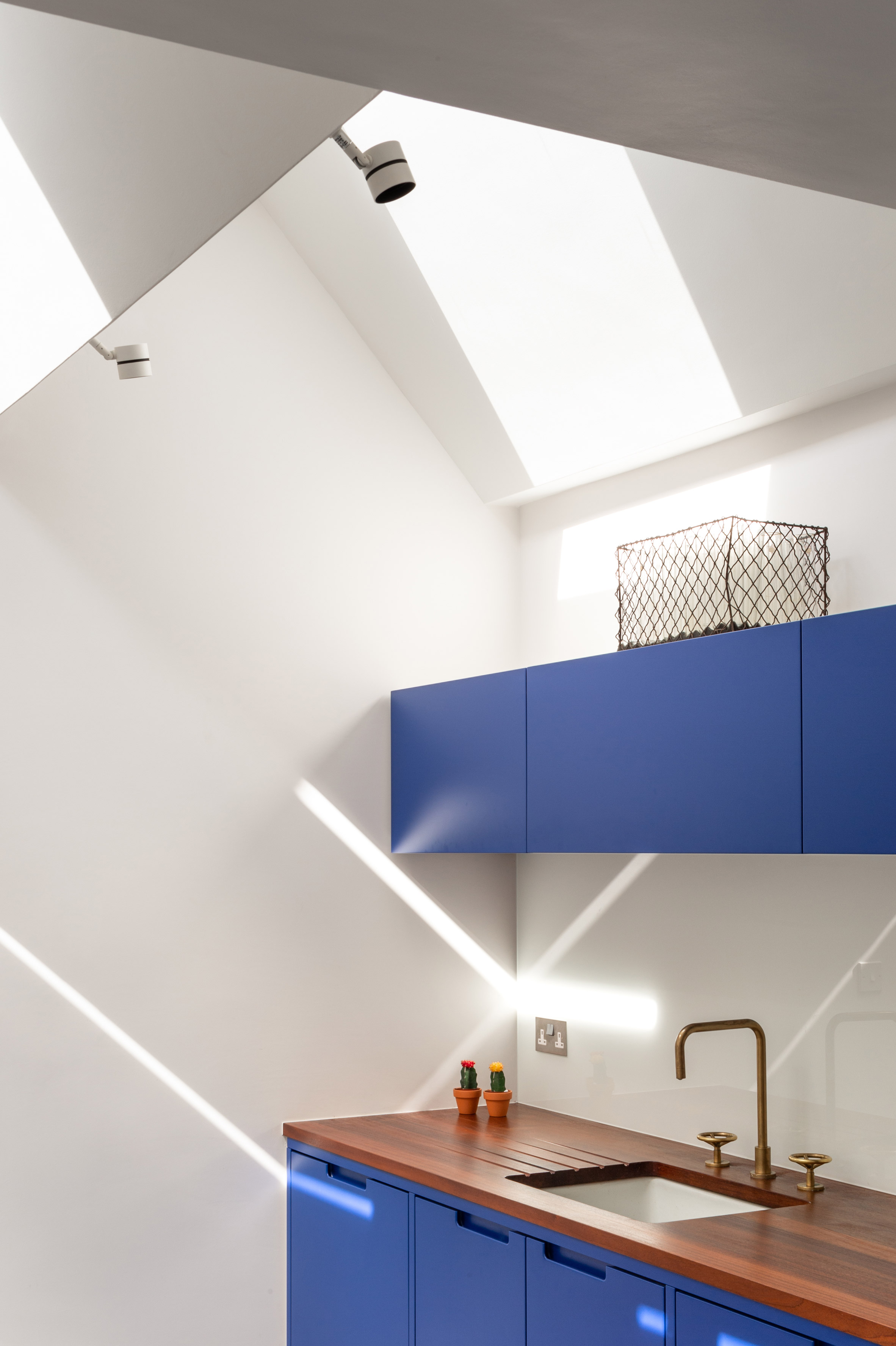 The interiors, arranged around a single black steel column that support the extension’s roof, have been finished simply in white, with a concrete floor and the contrasting blue kitchen counters.

Lighting rails have been incorporated along the length of the extension to help illuminate the dining area at night. 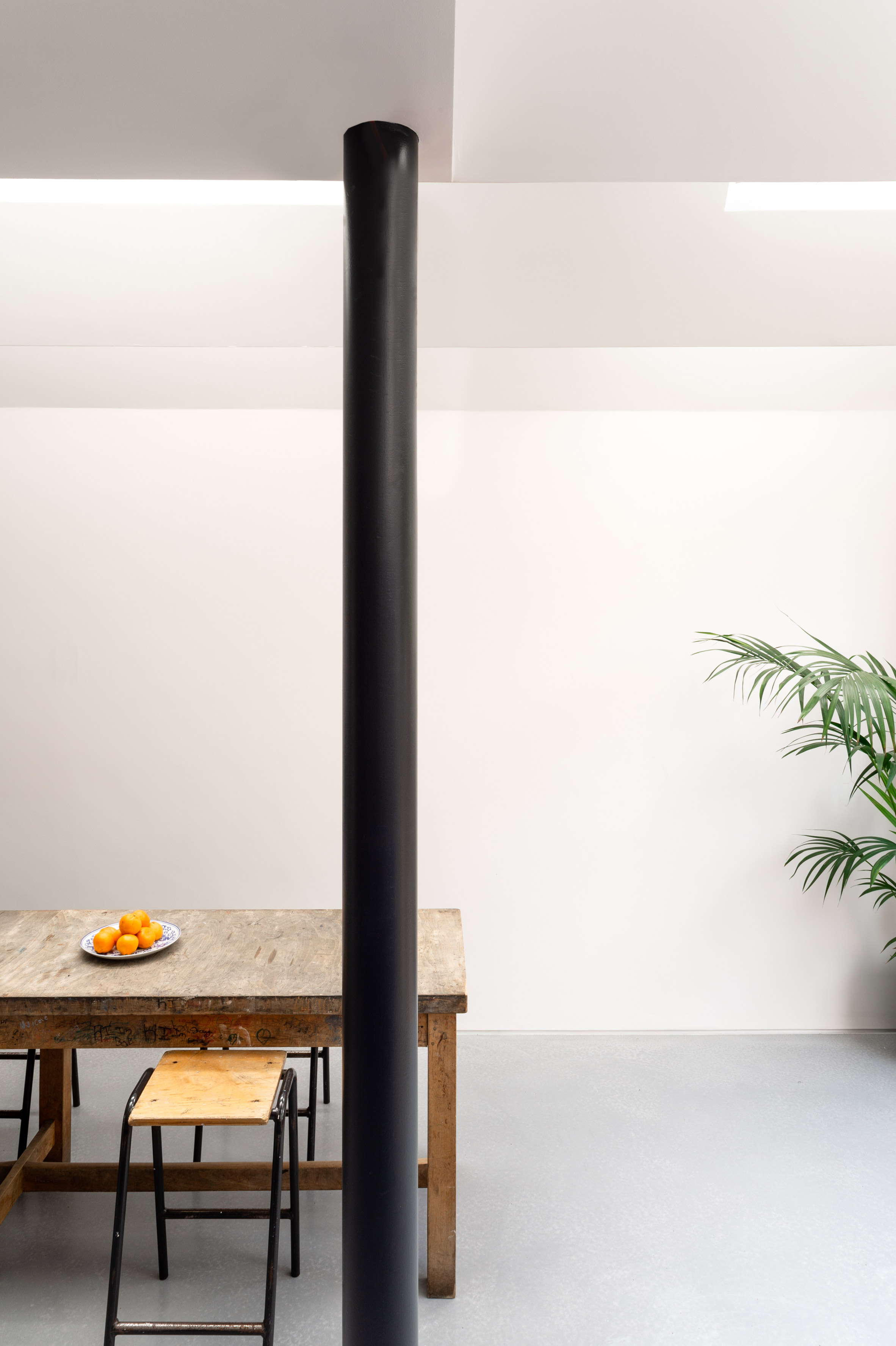 The new dining room sits at the end of a narrow corridor that leads from the home’s entrance, and has also been directly connected with a new set of doors to the existing living room.

In order to future-proof the building for hot summers, the ceiling incorporates a built-in heat-source pump system, which pumps chilled water through the structure. 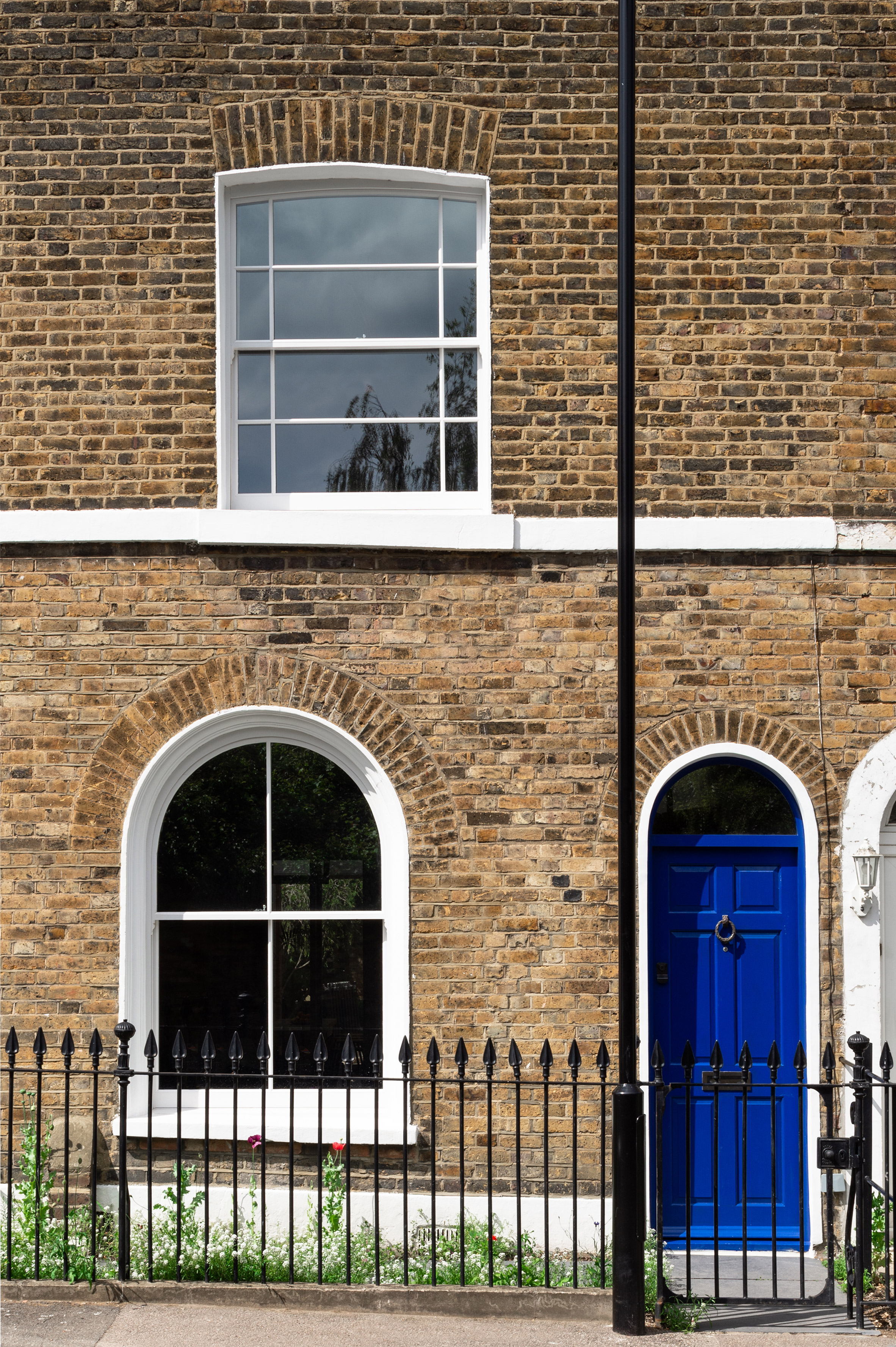 Outpost was founded in 2016 by Robin Sjoholm and Thomas Housden.

Other house extensions with interesting features in London, include Archmonger’s corrugated metal extension inspired by a stegosaurus, and an extension by MATA Architects featuring movable wooden shutters.

Photography is by French + Tye.