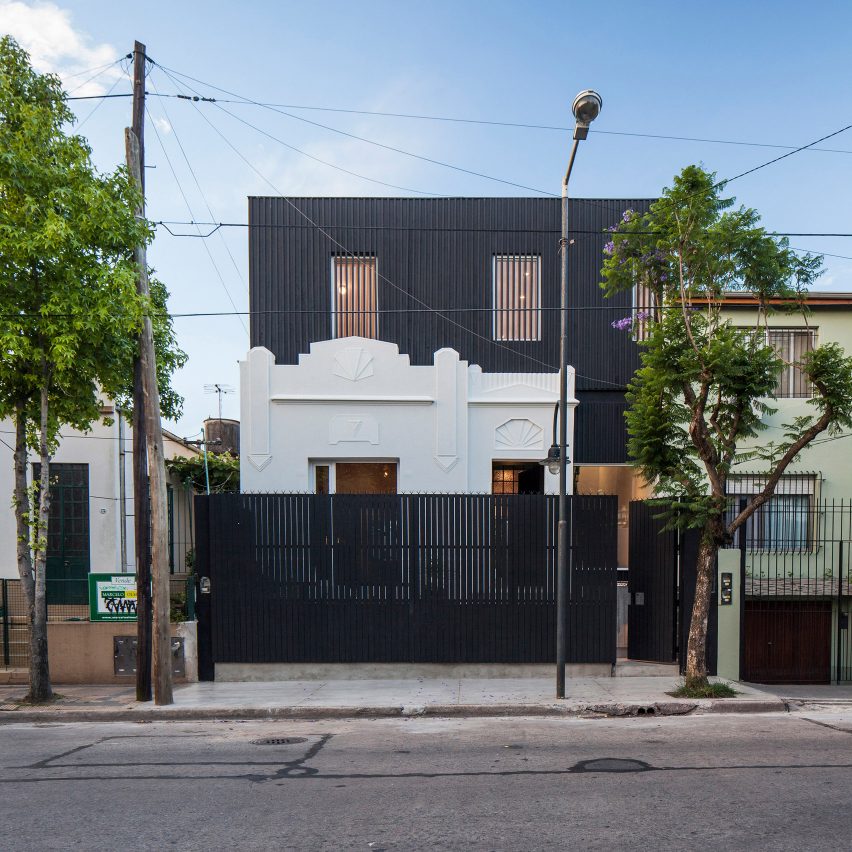 A coloured stained glass window and decorative orange tiling were among the existing features PK Arquitectos combined with modern touches in the renovation of this house in Argentina.

PK Arquitectos has extended the art deco home in San Fernando, Buenos Aires, to create a 200 square-metre (2,150 square-foot) house that preserves and restores many of the house’s original features.

“The entire project was centred upon the premise to respect the art deco style of the existing house and to use a light structure over the new building,” PK Arquitectos said. 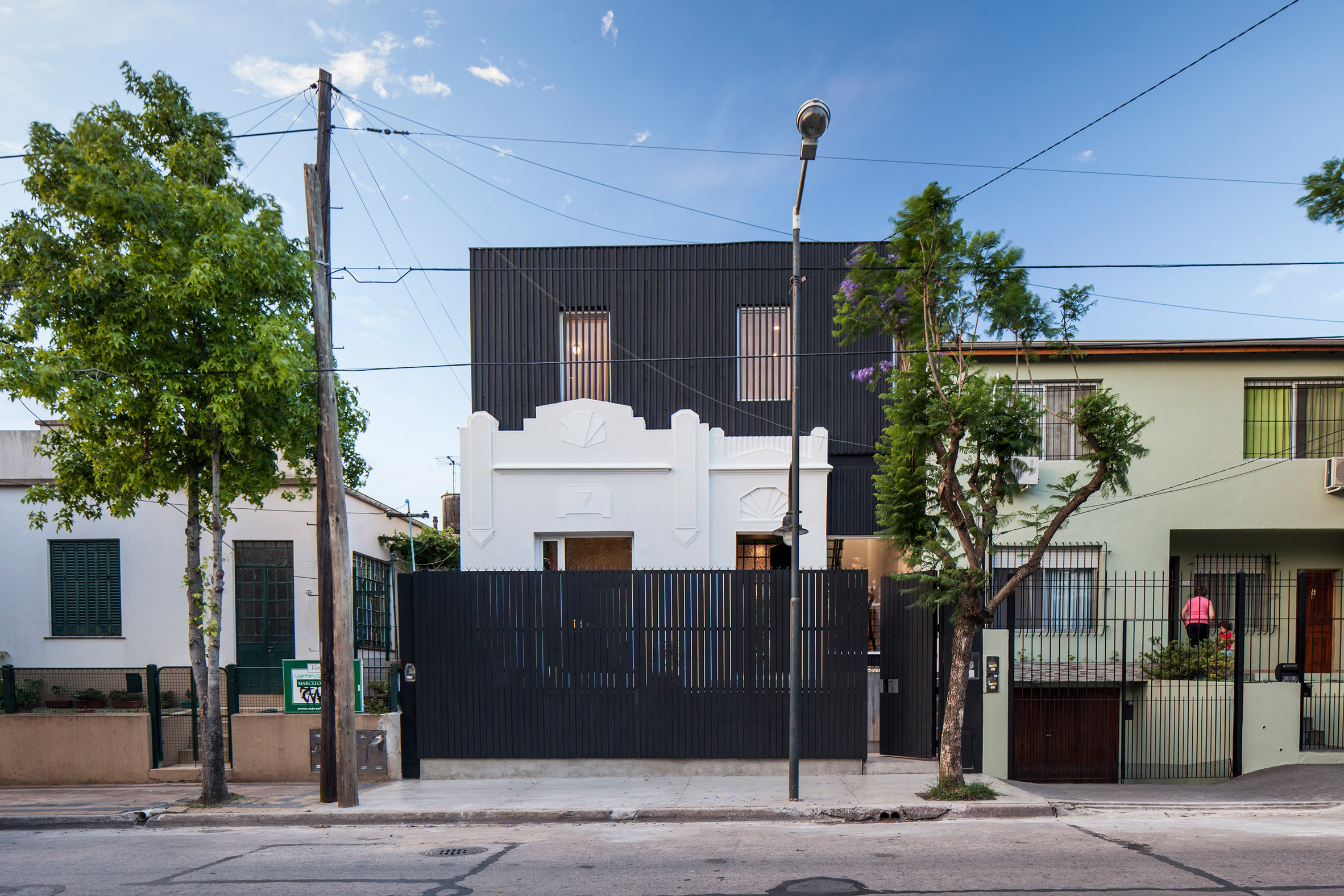 A balloon frame, a construction method that extends long studs from the ground to the roofline, was used to build the extension above the existing structure.

“The new volume, entirely made in dry Balloon frame, implanted as a nest on the existing building, with a materiality opposite to the old house but totally complementary generating a dialogue between the old and the modern,” said the designers. 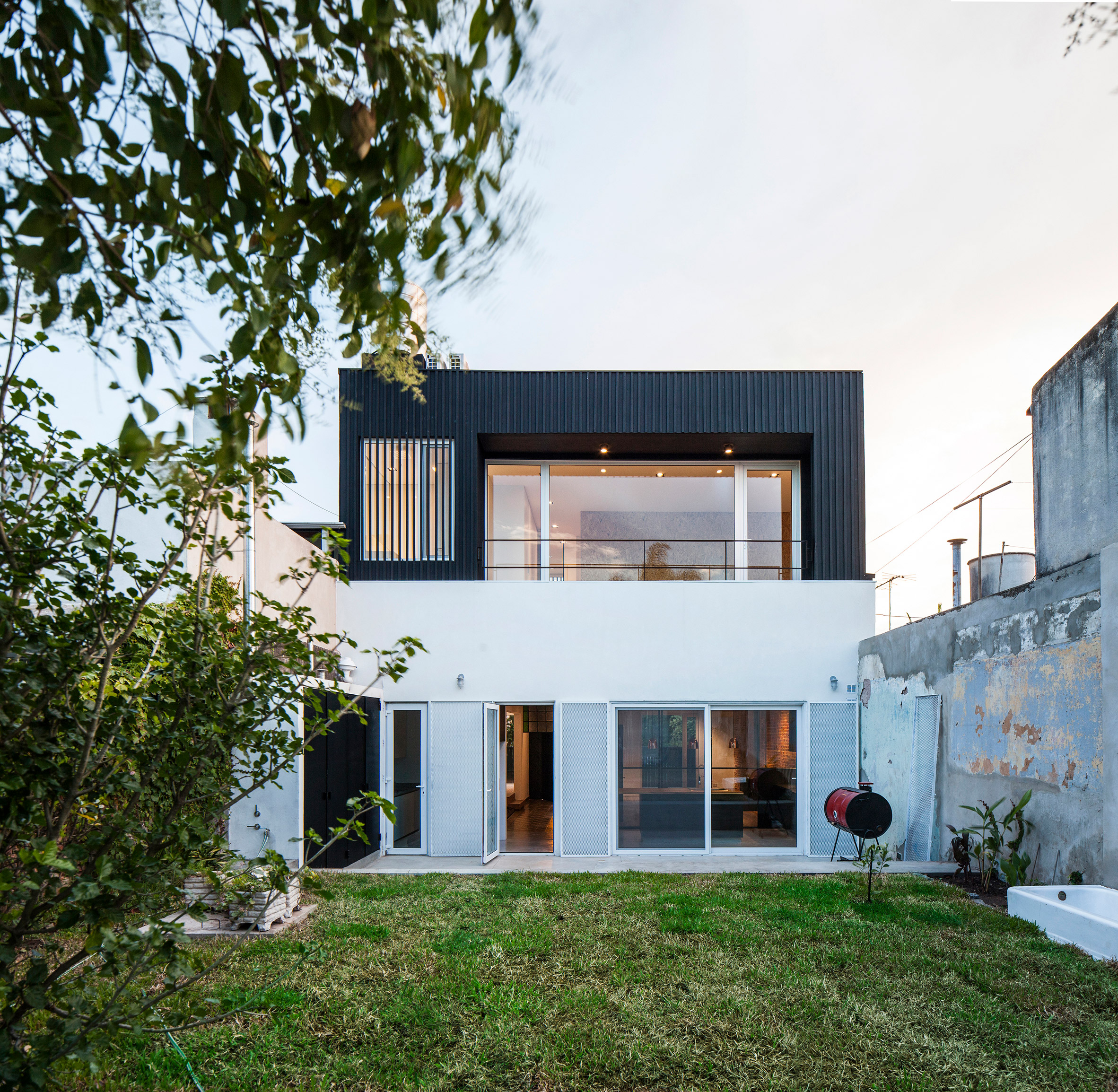 To give the facade its new appearance painted plaster was replaced with waterproof plastic coating of the same colour. To maintain the geometry of the building’s art deco style the architects restored all the decorative mouldings.

A wooden fence made from planks of eucalyptus hides an access patio that comprises the front yard and creates privacy. 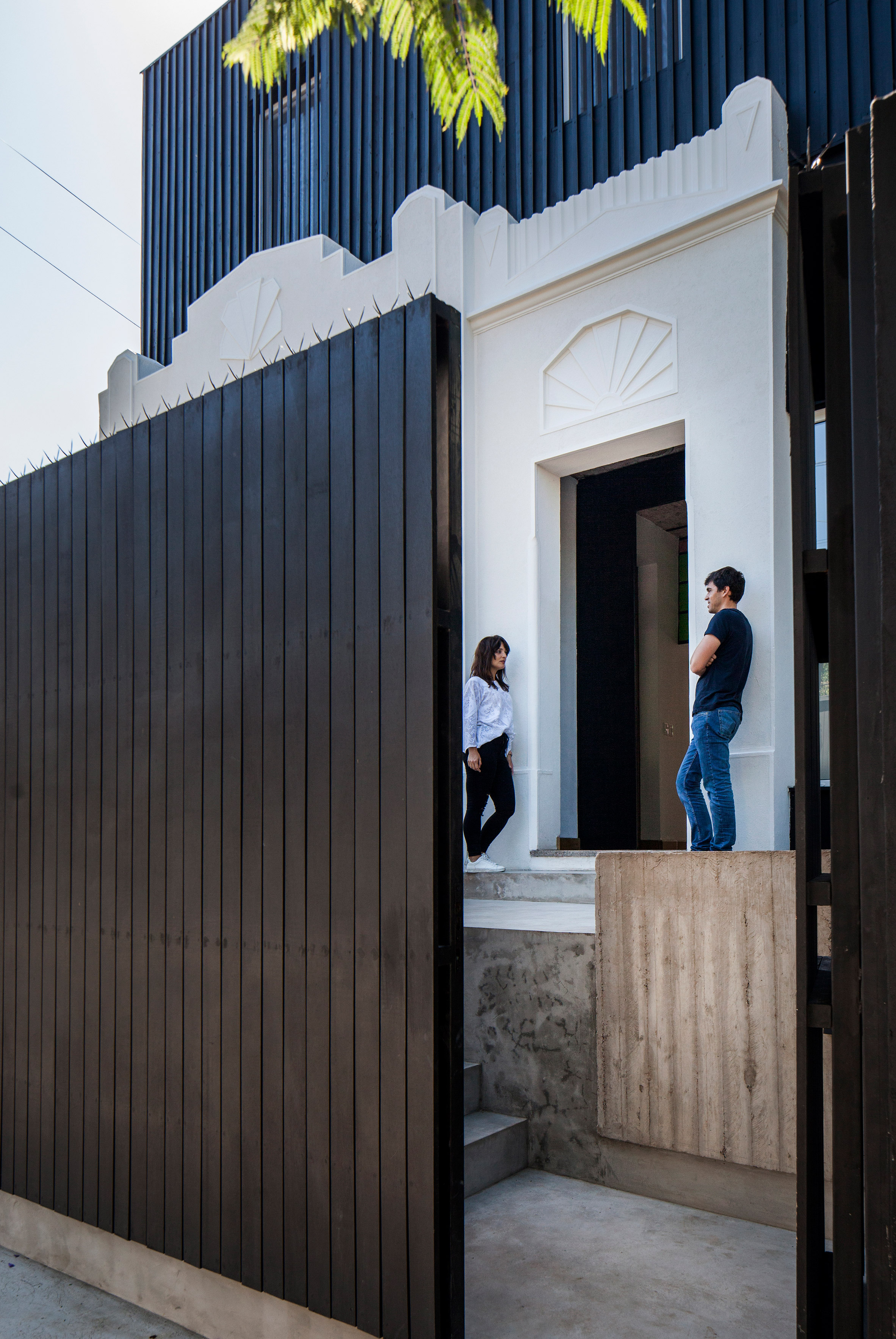 The house’s layout was organised to maximise views and access to green space. The kitchen has been placed on the ground floor alongside the garden, while on the upper story the master bedroom has a full-height window that looks out across the garden.

“The different spaces were designed in two floors, based on the possibilities and opportunities that the old building offered and always capturing the best orientation, not only horizontally but also overhead,” the studio added. 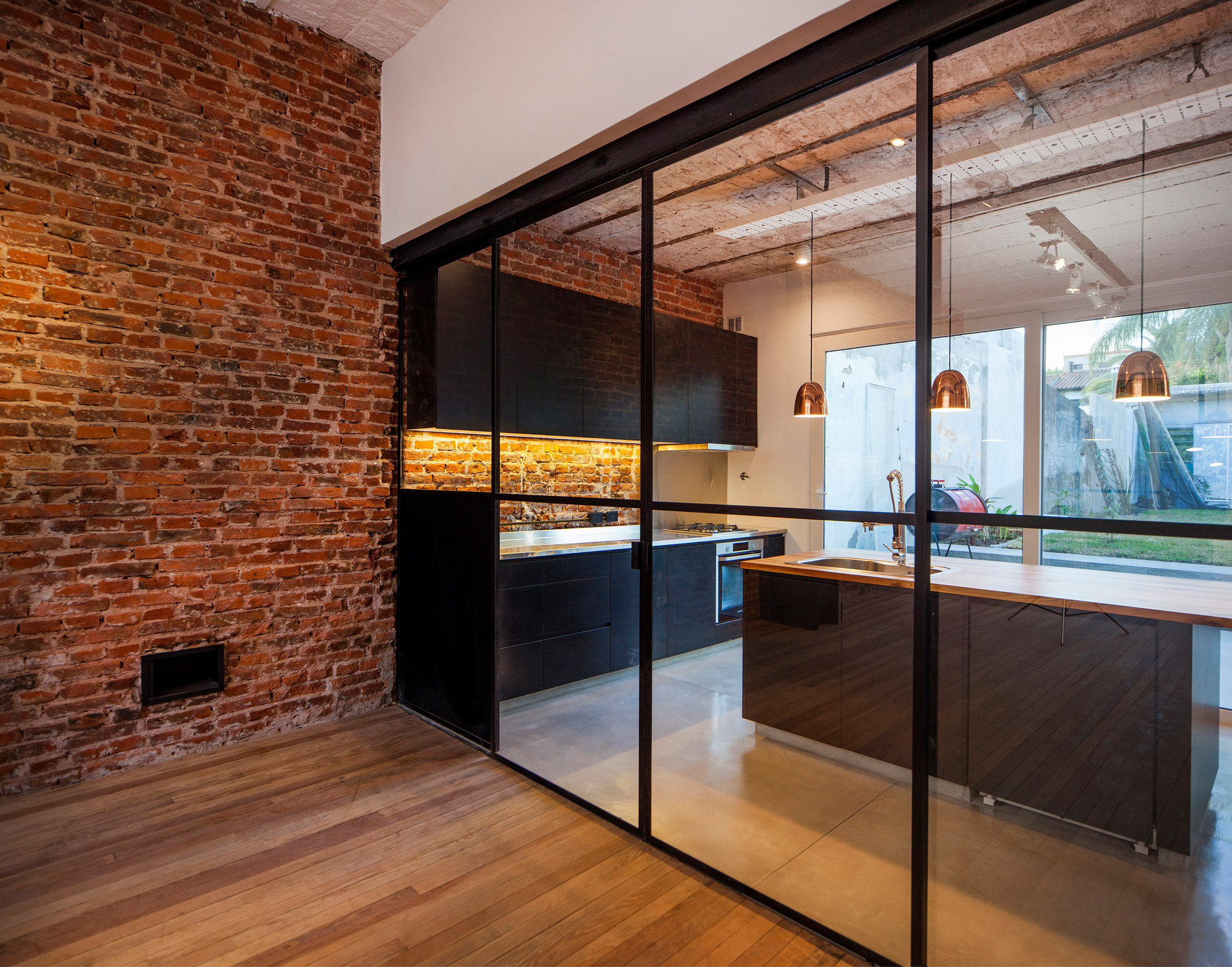 In the entryway an existing stained glass window and ornately tiled orange flooring were restored to keep show the house’s history. 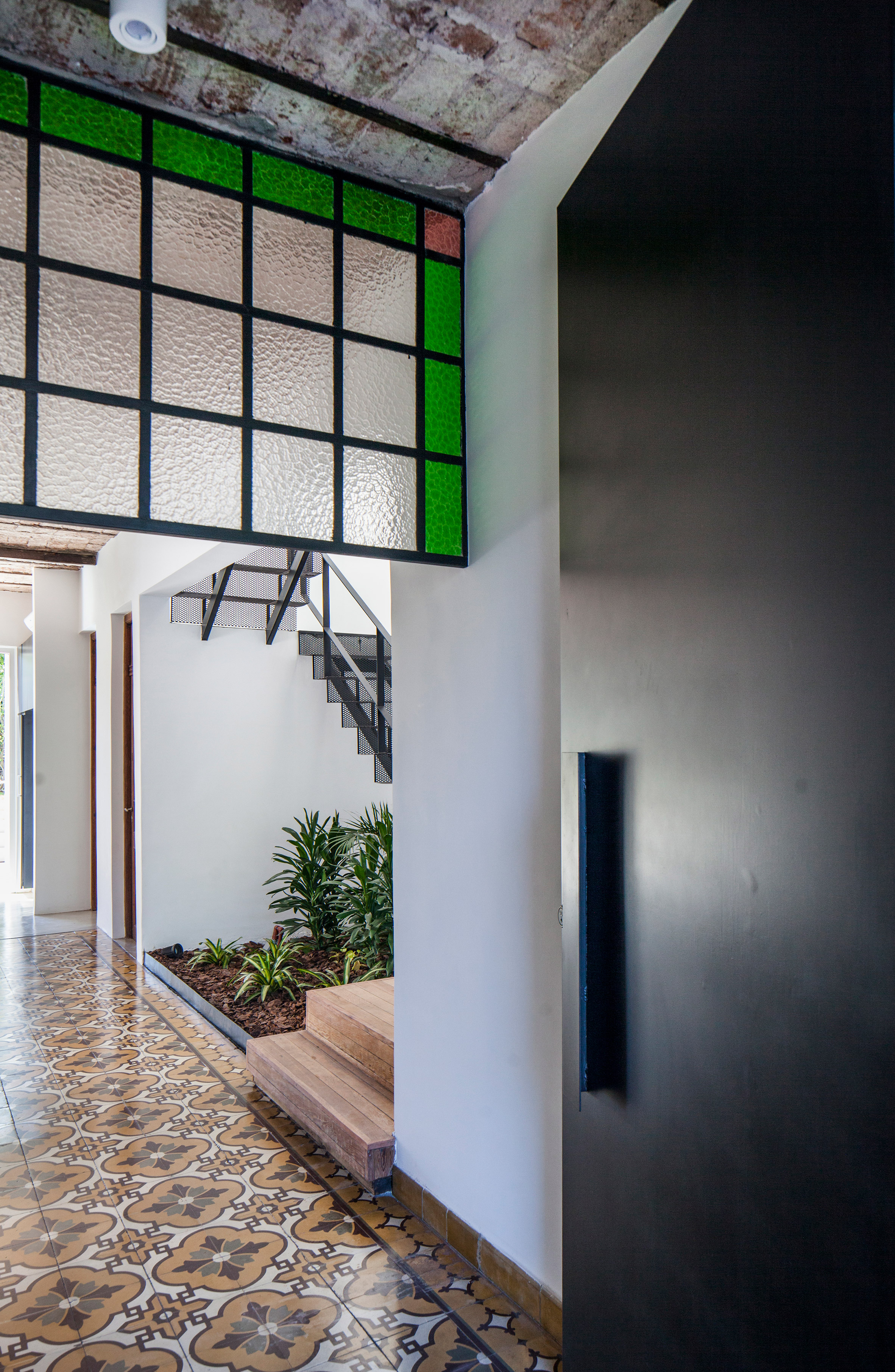 Existing plaster walls were removed to reveal brick, which the team left exposed in the kitchen and other living spaces. Similarly on the ceiling, the structural vaulting was left untouched, giving the space its contemporary feel.

Hardwood pinotea floor runs throughout much of the interior spaces. Some of the flooring beams were used to construct the kitchen countertop. 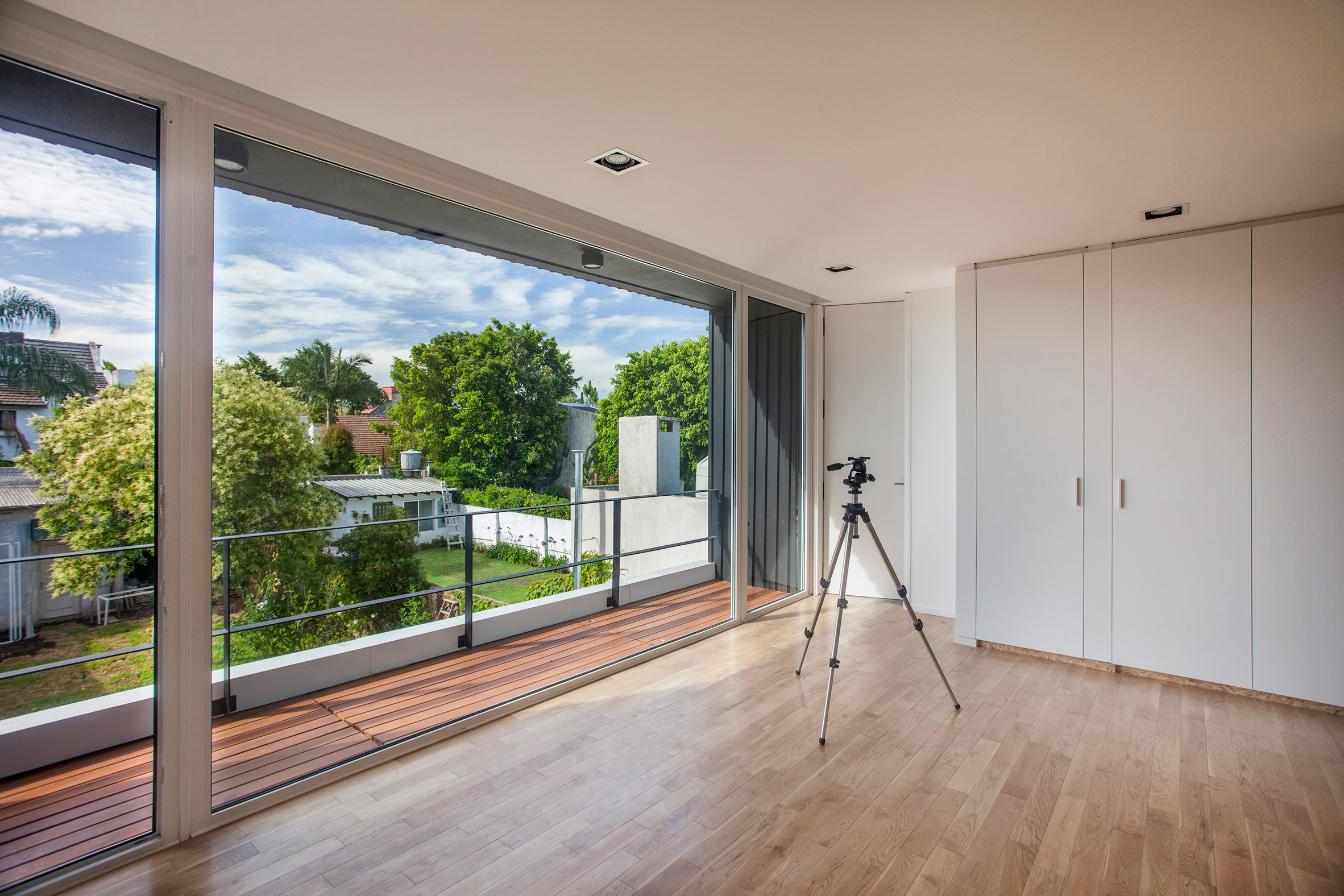 Other modern accents added to the residence include a front door made from black iron, sleek black cabinetry and metal countertops in the kitchen and an angular staircase made with sheet metal that features a perforated cutout pattern.

Photography is by Alejandro Peral.

A Weekend House With Spectacular Sea Views In Chile