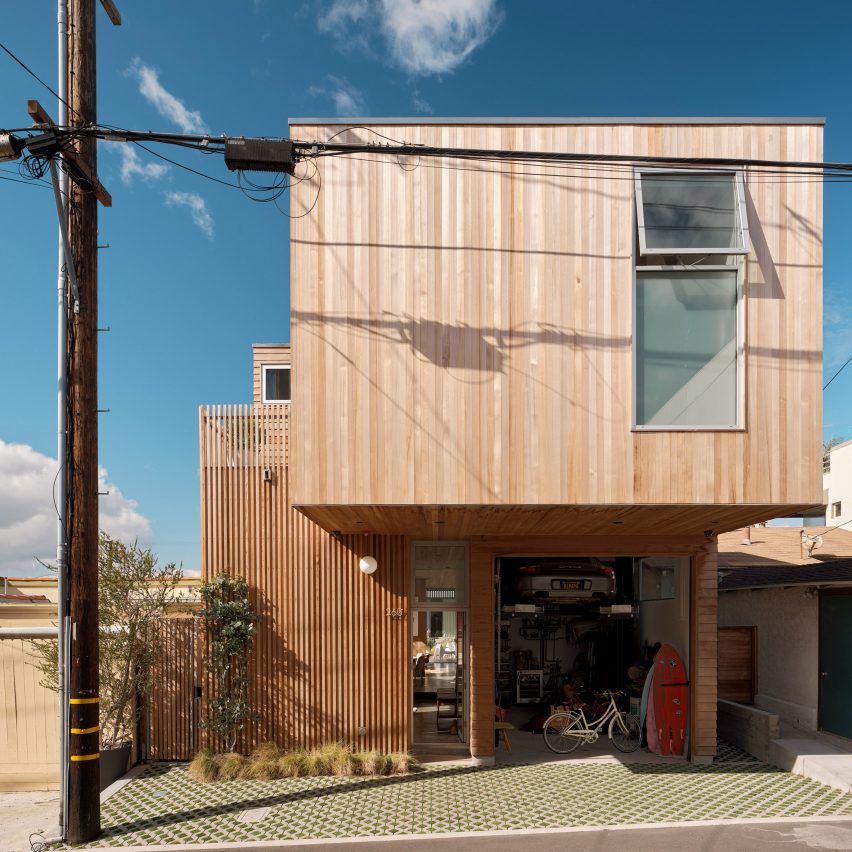 A photographer and his family live in this boxy house clad in cedar that design-build practice Ras-A Studio has designed near the ocean in Los Angeles County.

Ras-A Studio completed Walk-Street House in the city of Hermosa Beach for the professional photographer, his wife and their son, who is a keen surfer. 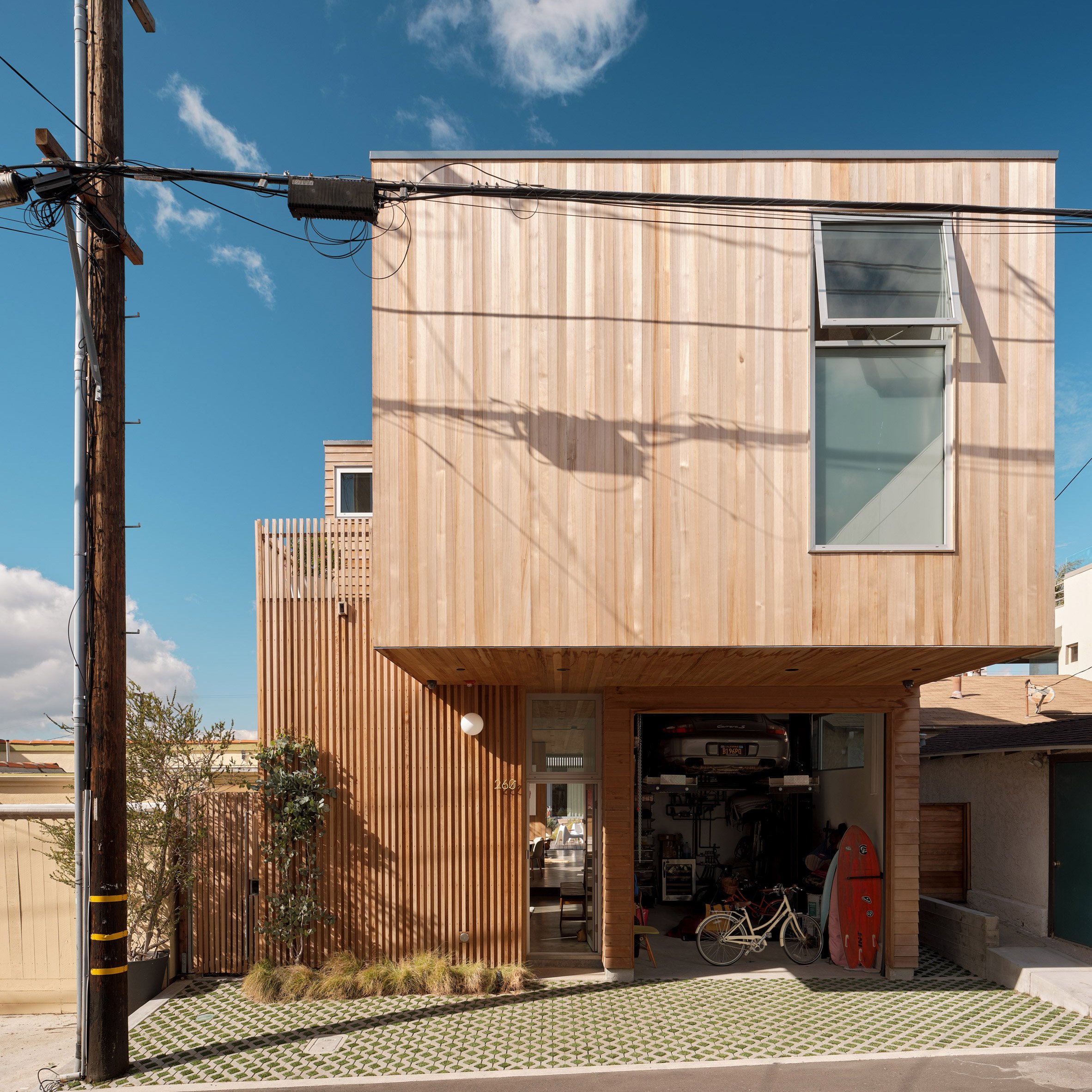 Comprising a series of stacked volumes clad in slats of western red cedar, which are milled in different ways to offer contrast and texture, it is similar to a home that Blue Truck Studio recently renovated nearby in Manhattan Beach.

When designing Walk-Street House, Ras-A Studio aimed to create the maximum amount of living space and a two-car garage – two important requests of the homeowners – while observing the city’s zoning requirements. 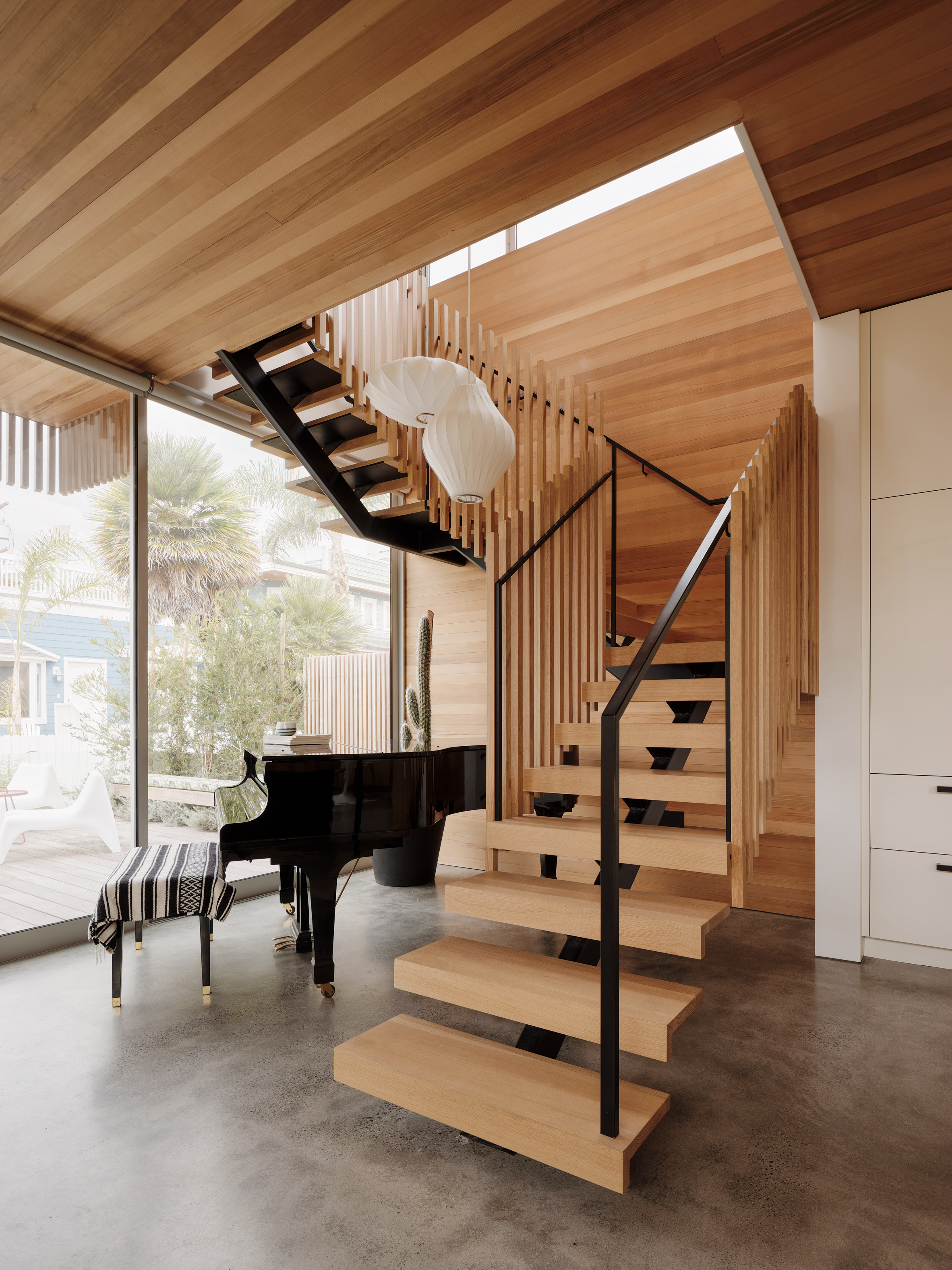 One of the main challenges was the limitation of the site, which is fronted by a walk street that allows residents to walk up to their homes rather than drive.

“The challenge was the home’s tight 30-foot (nine-metre) by 70-foot (21-metre) lot flanked on one end by the pedestrian-only street and on the other with a narrow alley,” said the studio. 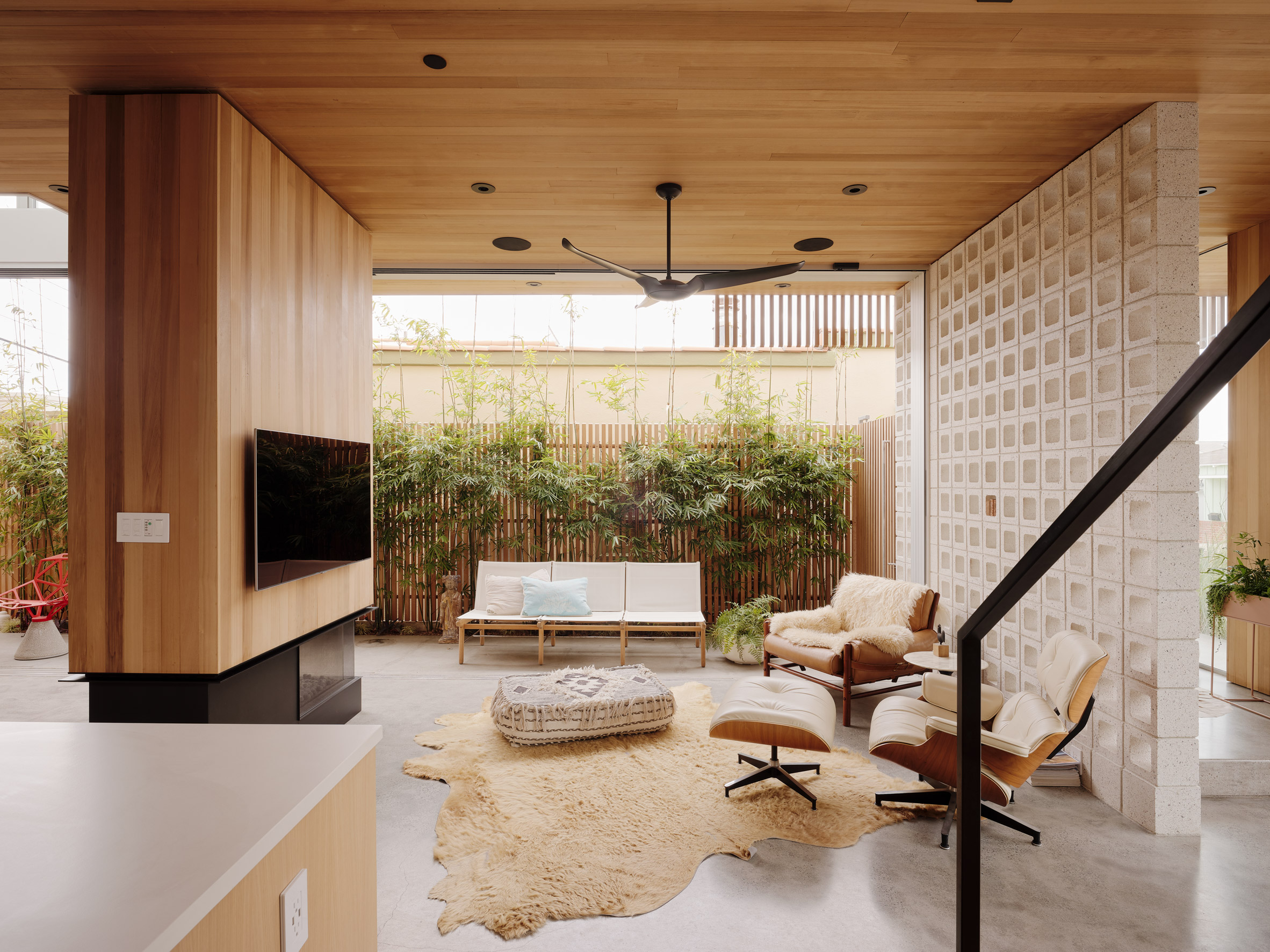 “Our clients wanted an open concept on the ground floor that leads to natural grade and outdoor areas, but zoning mandates a large two-car garage that would otherwise force the living spaces of the small footprint to be split between multiple levels,” it added. To meet the clients’ requests, Ras-A Studio built a garage along the alley side of the home with a mechanical parking lift that fits two cars stacked vertically in the footprint of one. The studio says it’s the first one to meet Hermosa Beach’s zoning requirements. 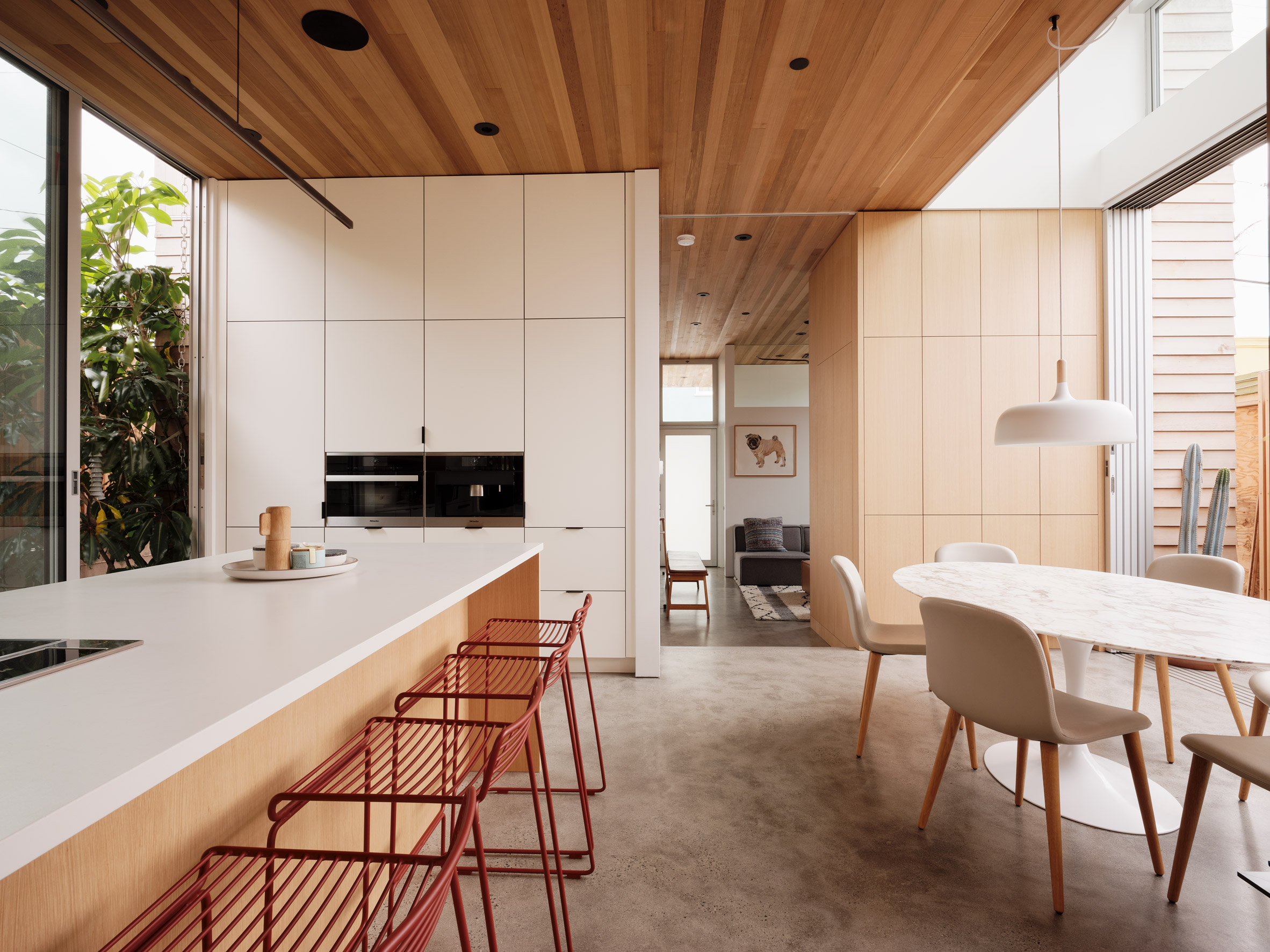 The parking design frees up space on the ground floor to allow for an open-plan kitchen, dining and living room. A foyer with a black baby grand piano, a den and a bathroom are also located on the main level. 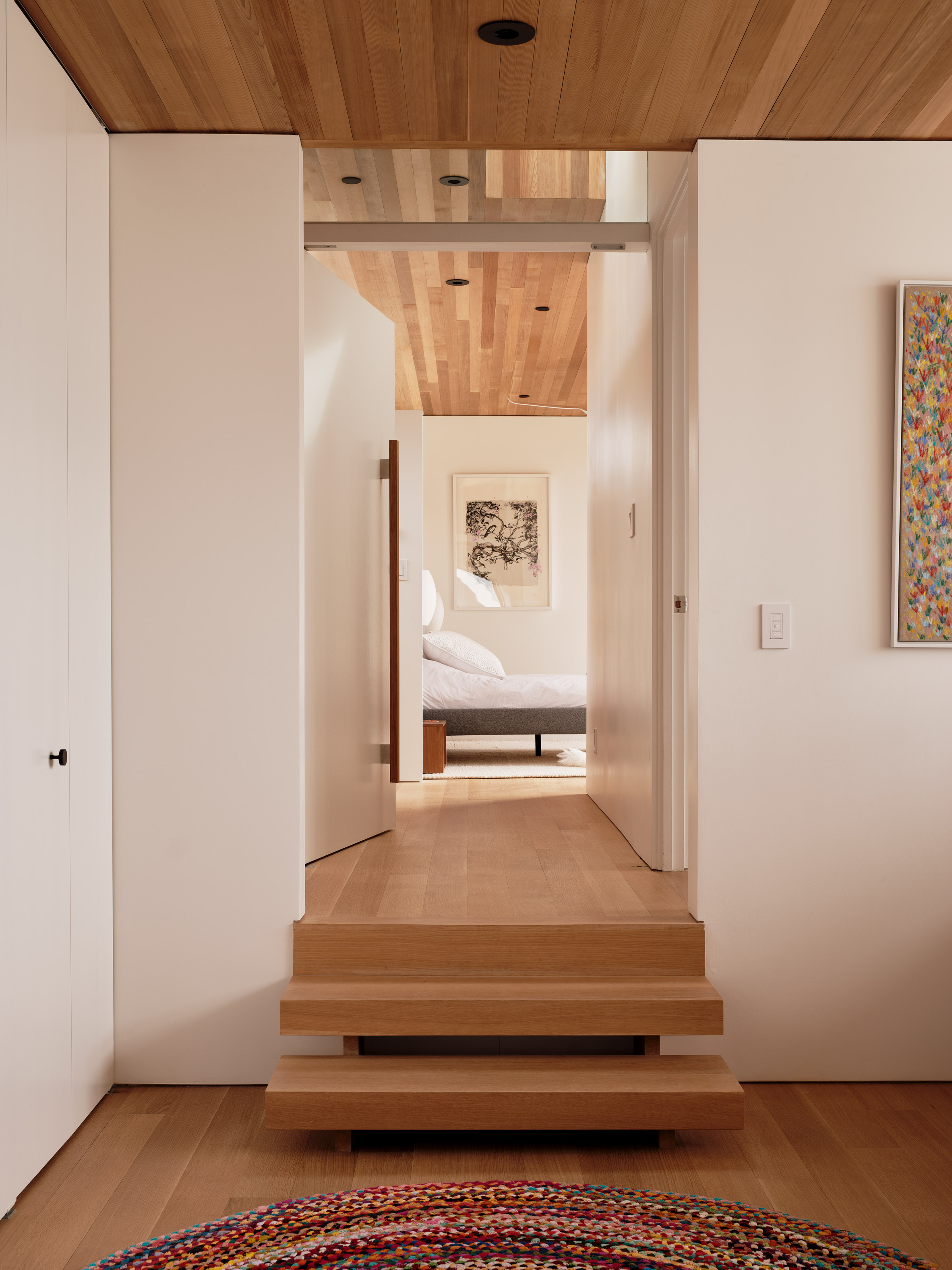 At the front of the home, facing the walk-street on 31st Street, the team created a porch with ipe wood, drought-tolerant plants and screens made from white concrete masonry blocks.

A glass pocket door stretches 27-feet (eight-metres) along the side of the home and accesses a second terrace. This side yard setback was also a zoning requirement, and Ras-A Studio designed the area to allow the interiors to borrow over six feet (1.8 metres), thus “making the modest-sized footprint live larger than its square footage”.

The second level contains three bedrooms, two bathrooms, an office and two balconies – one of which has views of the Pacific Ocean and stairs that access another patio on the roof. 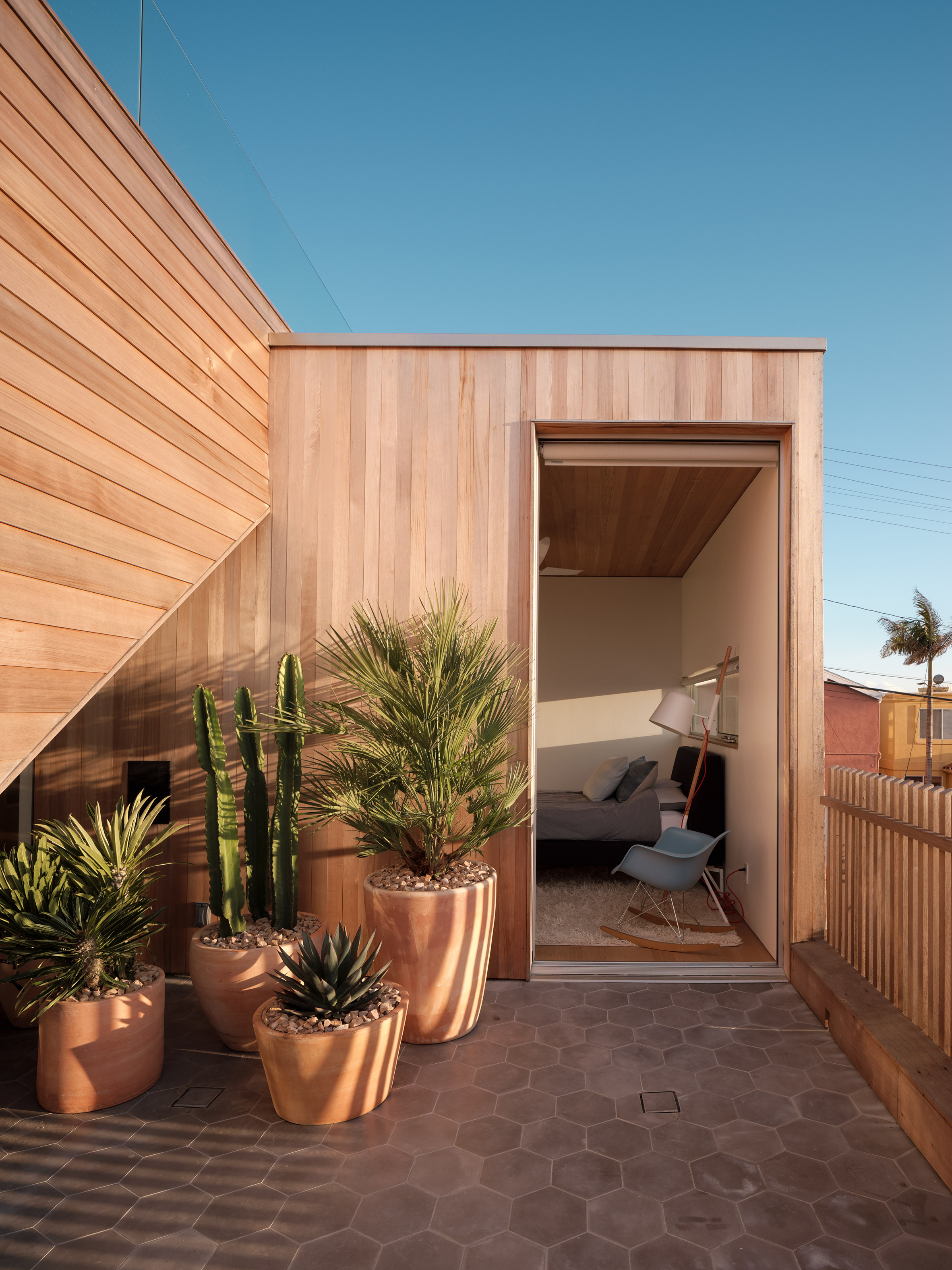 Interiors feature white walls, cedar ceilings and accent walls, and floors in either white oak or polished concrete. Most of the furniture and fixtures are white, wood or leather. Red bar stools by Hay add a pop of colour.

Several sustainable design details complete Walk-Street House, including a solar water collector on the south part of the roof that provides hot water and supplements a boiler for an in-floor hydronic radiant heating system. A turf-block driveway next to the garage allows rainwater to percolate into the water table, and operable doors and windows utilise the sea breeze for passive cooling.

Ras-A Studio is based in nearby city Redondo Beach and has also renovated a mid-century home in Los Angeles’ Los Feliz neighbourhood.

Photography is by Joe Fletcher.

The post Ras-A Studio builds Walk-Street House near the beach in California appeared first on Dezeen.