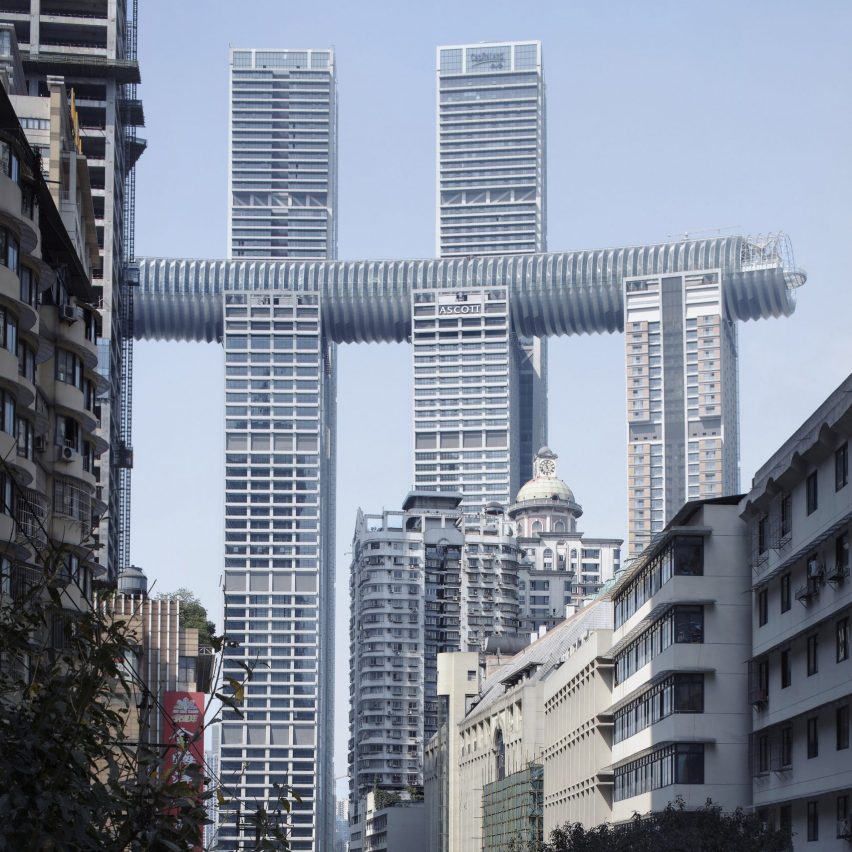 The Crystal skybridge, which connects four 250-metre-tall skyscrapers, has opened as the first stage of Safdie Architects Raffles City Chongqing complex in China.

The public observatory that cantilevers out from one end of The Crystal is the first part of the vast complex to be completed, with rest of Raffles City Chongqing due to be finished by the end of the year. 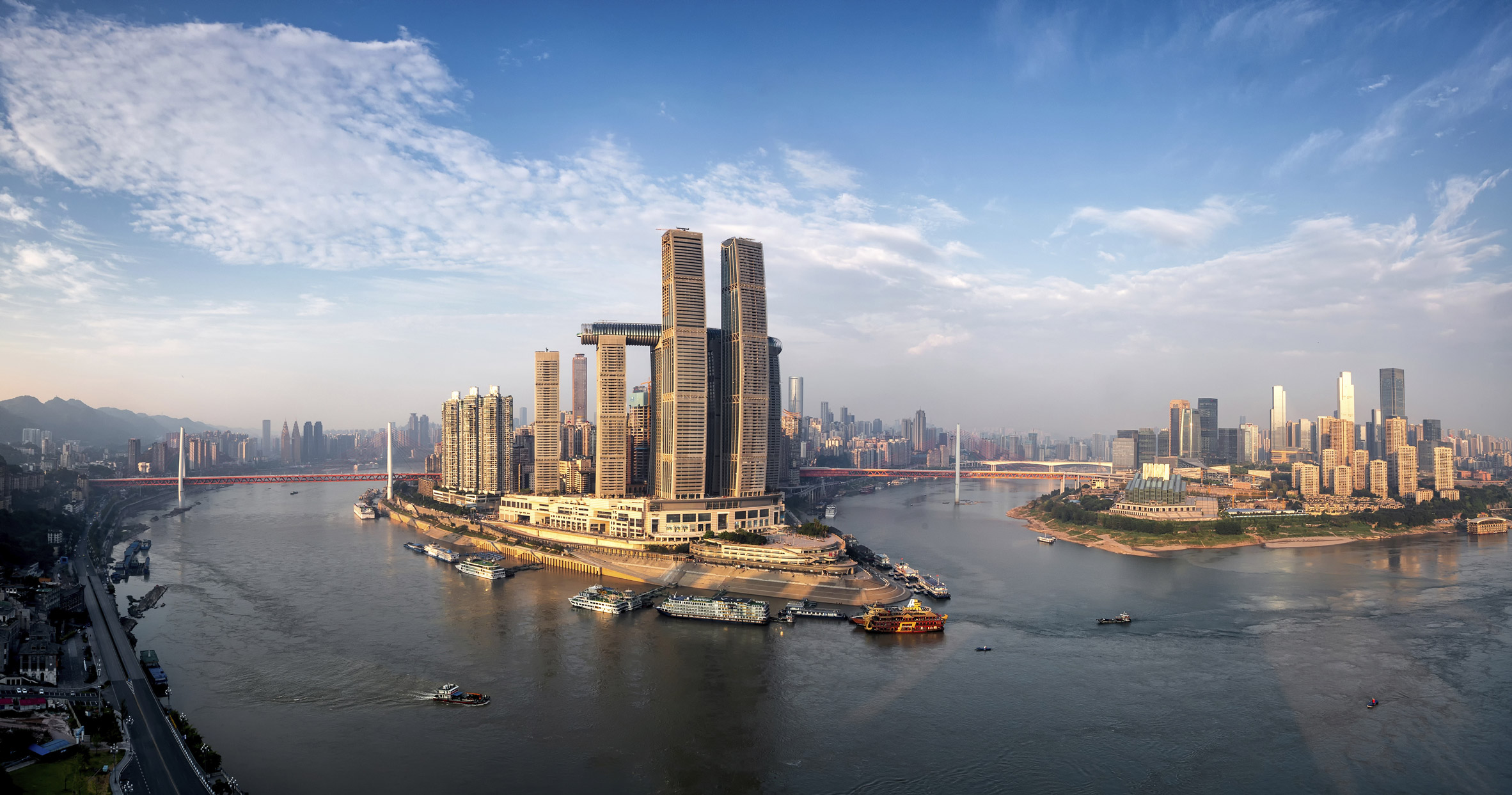 The Raffles City Chongqing sits at the meeting of the Yangtze and Jialing rivers in the city’s Yuzhong district.

In total the development consists of eight skyscrapers connected by a five-storey podium. On the south side are six 250-metre-high towers, with two taller 350-metre-high skyscrapers to the north completing the complex.

Sail-like screens curve out from the north side of all the skyscrapers, filtering daylight and giving the complex a uniform appearance. 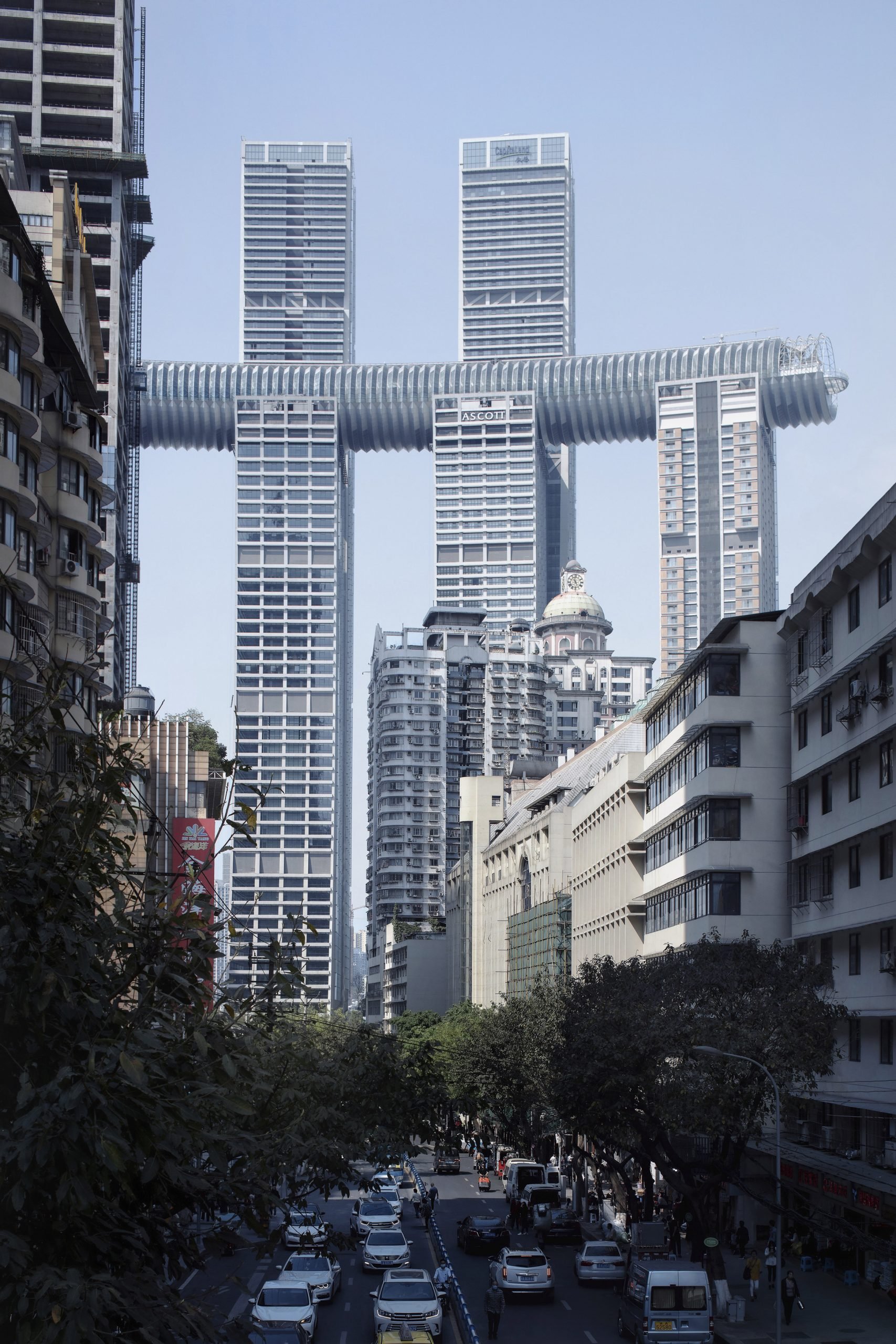 Stretching 300 metres between four towers on the 22.7-acre development, The Crystal is described by Safdie Architects as a “horizontal skyscraper”.

Bridges link the horizontal structure to the two taller skyscrapers. 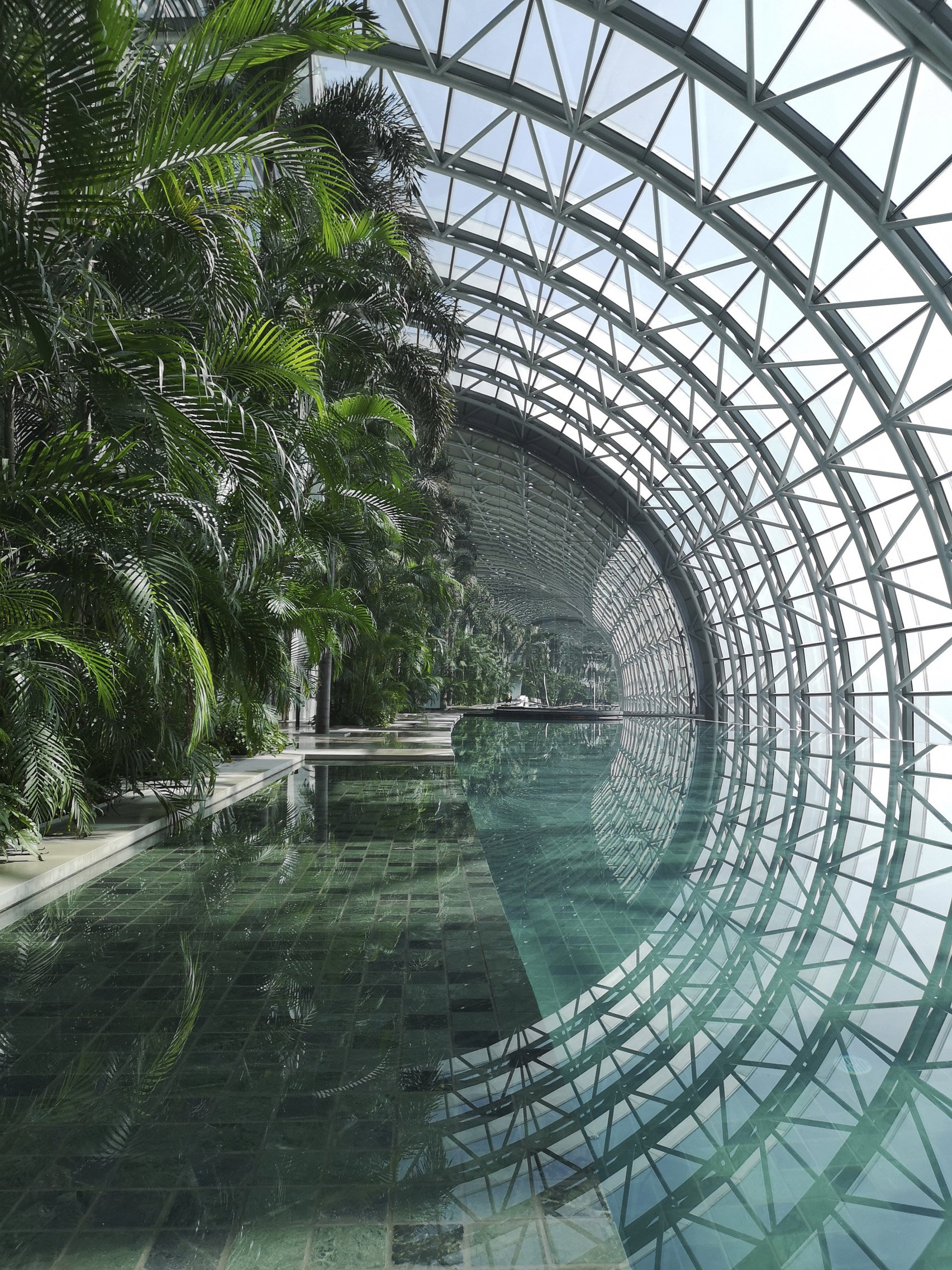 Designed as a glass and steel tube, The Crystal has an elliptical cross-section. Its outer walls are given strength by a concertina structure, shaded from the afternoon sun on the west side by metal panels.

Seismic isolation bearings on the towers are designed to support The Crystal, as the area is in is an earthquake zone. 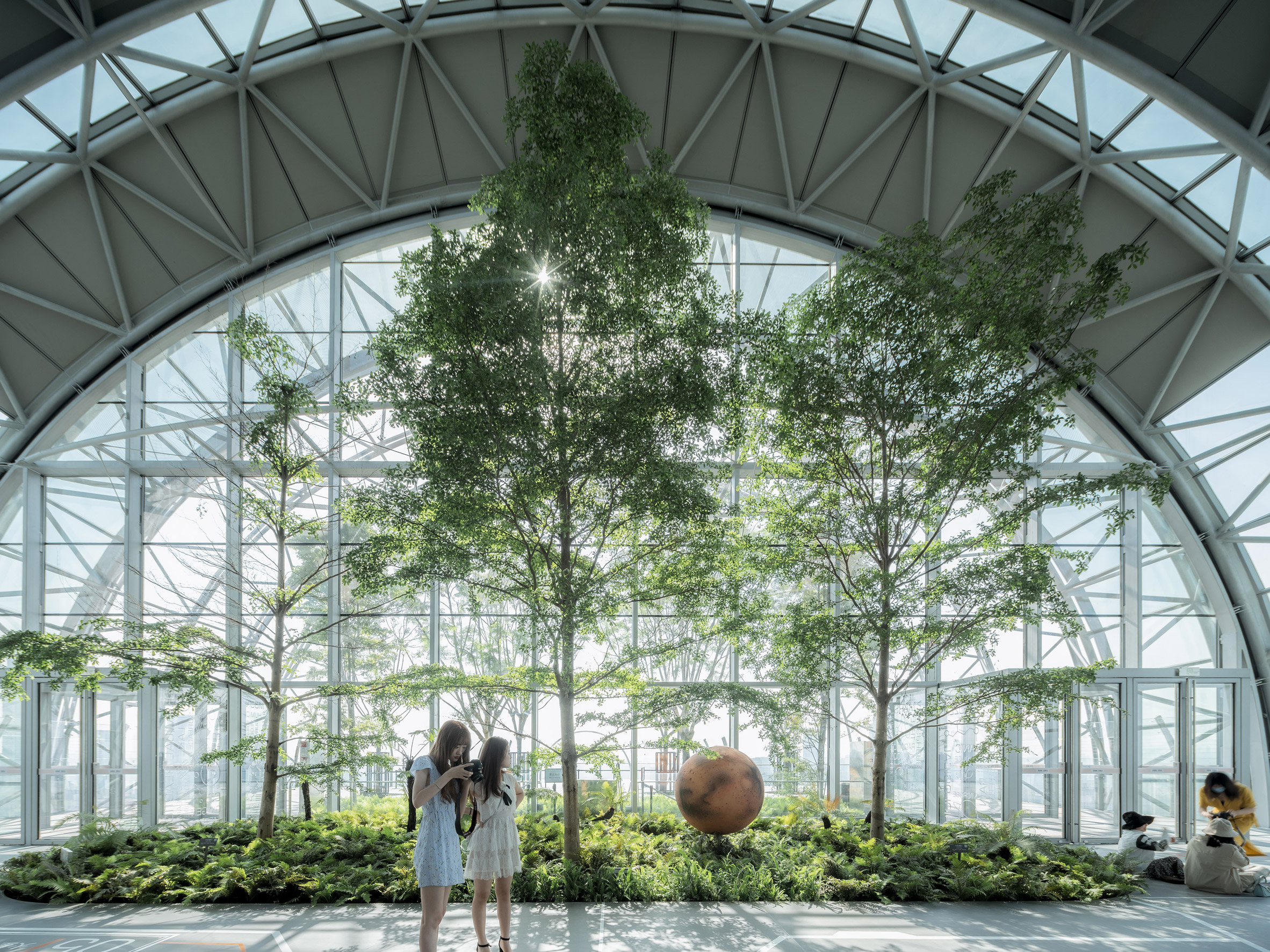 A glass-bottomed public viewing deck projects from one end, accessible through an open-air park. An infinity pool surrounded by trees touches one edge of the structure.

The rest of The Crystal contains gardens, bars, restaurants, a clubhouse for the residents and a lobby for the hotel, all located 250 metres in the air. 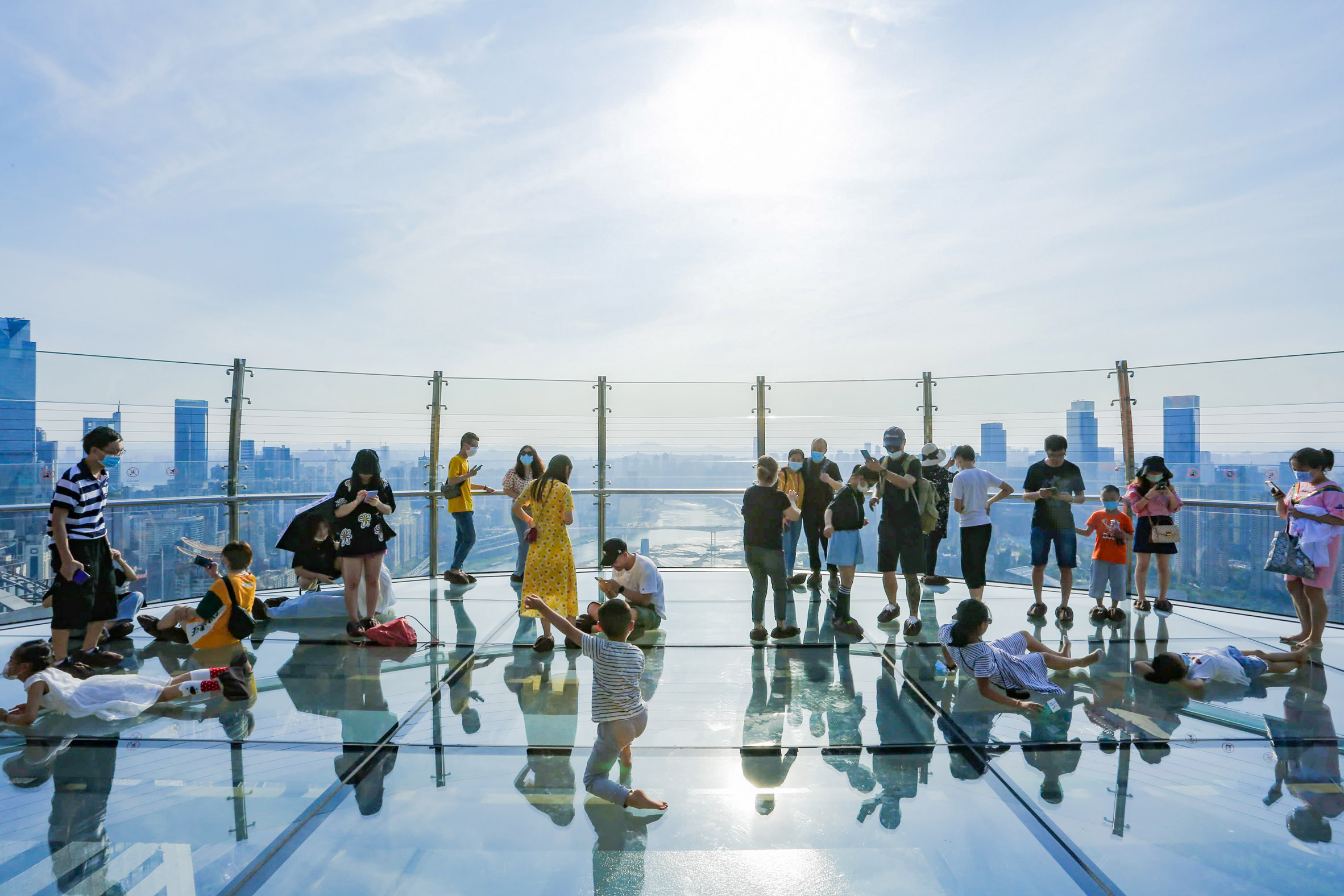 When complete the eight skyscraper will contain combination of offices, apartments, and hotel. The five-storey podium will have a shopping centre along with a series of galleries, with entrances at multiple levels to account for the area’s hilly terrain.

On top of the shopping area will be a rooftop park with large skylights to allow natural light to reaches down into the building below. 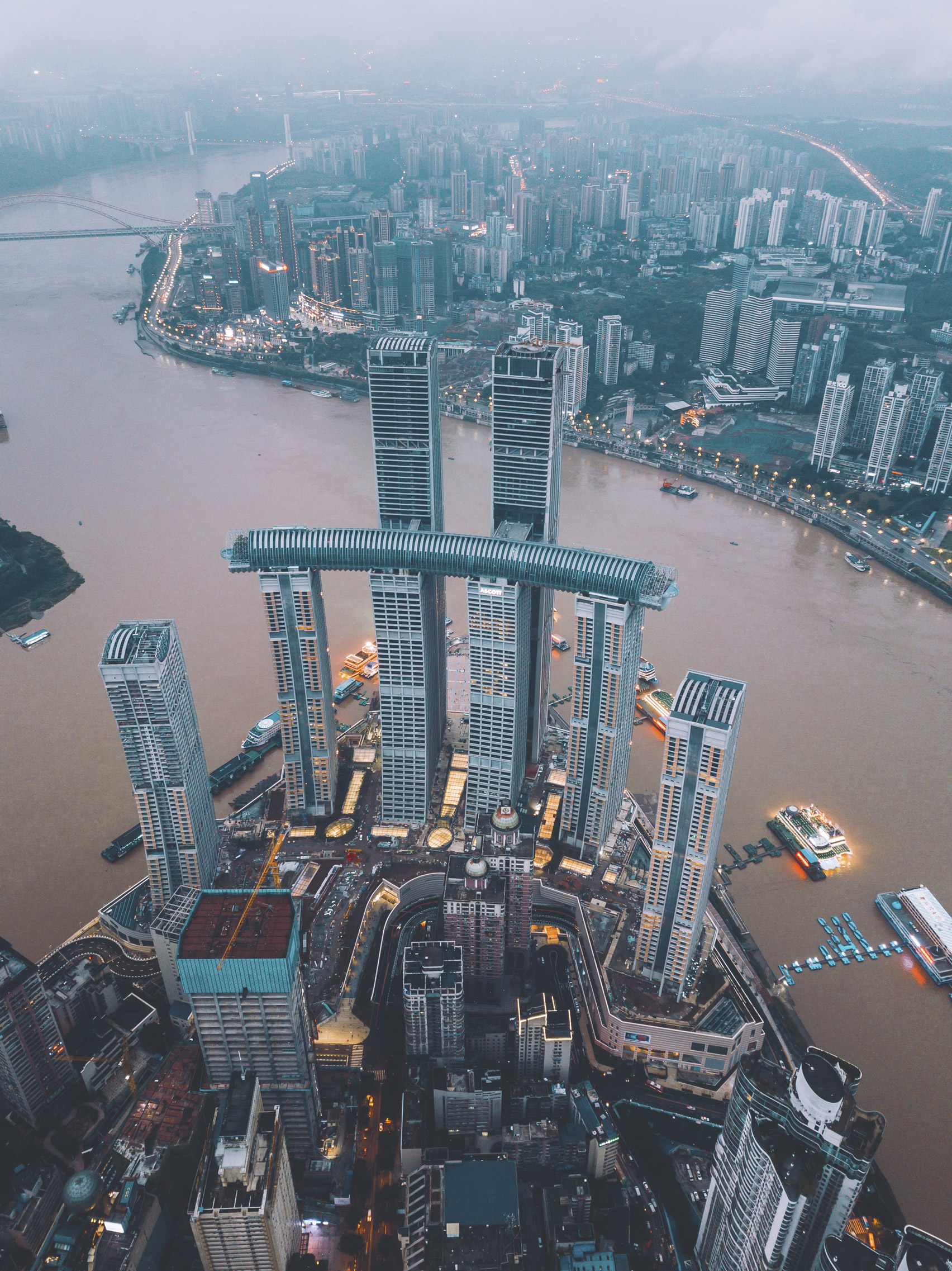 “Guided by the sheer scale and complexity of the site, our design brings people in and through the site at different levels, whether by foot, car, train, or ferry, to reconnect the city to its most historic site — The Emperor’s Landing.” 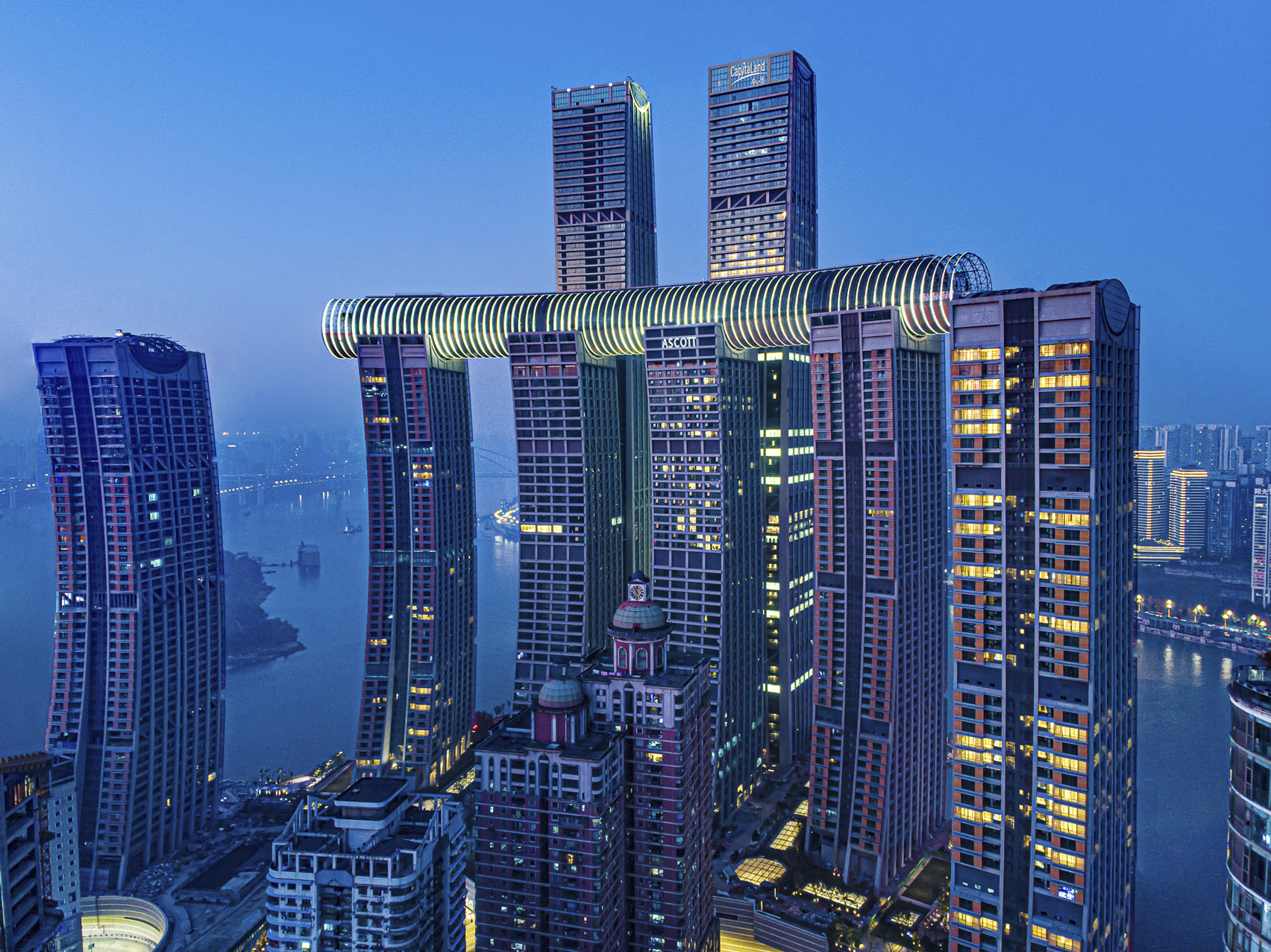 Raffles City Chongqing is the fourth development Safdie Architects has completed for the developer CapitaLand. Founded by Moshe Safdie in 1964, the practice has offices in Shanghai, Singapore, Israel and the USA.

Light and greenery are key features of Safdie Architects large-scale developments across Asia. Balconies cover the Sky Habitat towers built by the practice in Singapore, and trees fill the  Jewel Changi Airport with its huge indoor waterfall cascading through the centre.