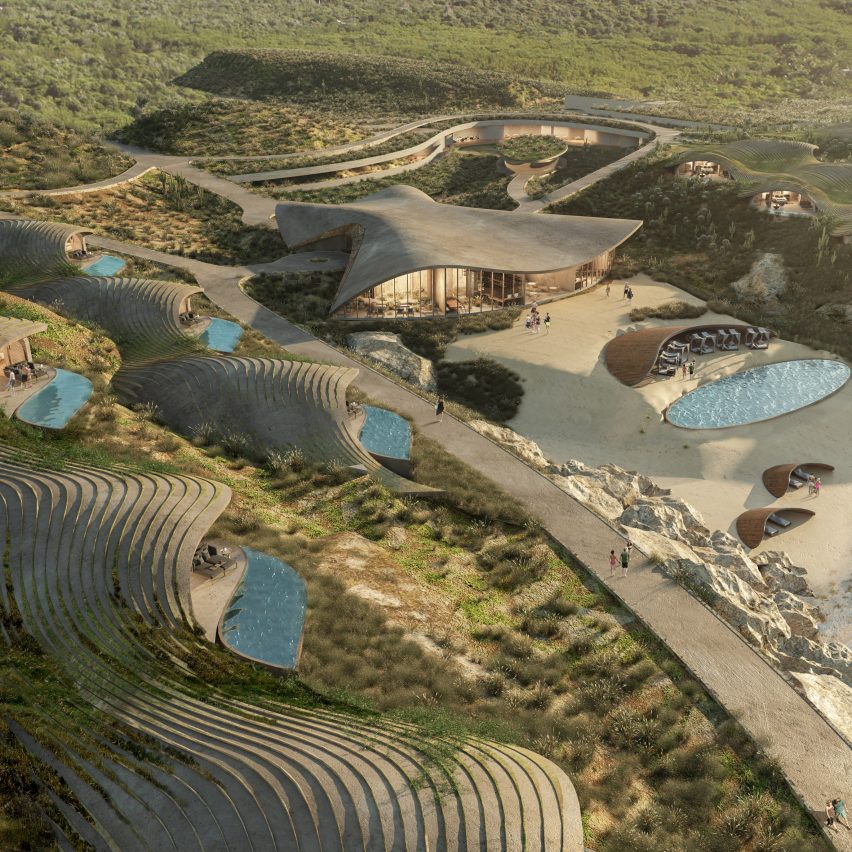 Luxury resort chain Chablé enlisted the firm to create the resort for a site located north of La Pax, Mexico on the Gulf of California, also known as the Sea of Cortés.

Sordo Madaleno Arquitectos‘ design for the Chablé Mar de Cortés comprises a series of pods with concrete roofs built onto the hilly, arid plot. In renderings of the project, the suites resemble large sea creatures clinging onto the existing terrain on the peninsula of Baja California. 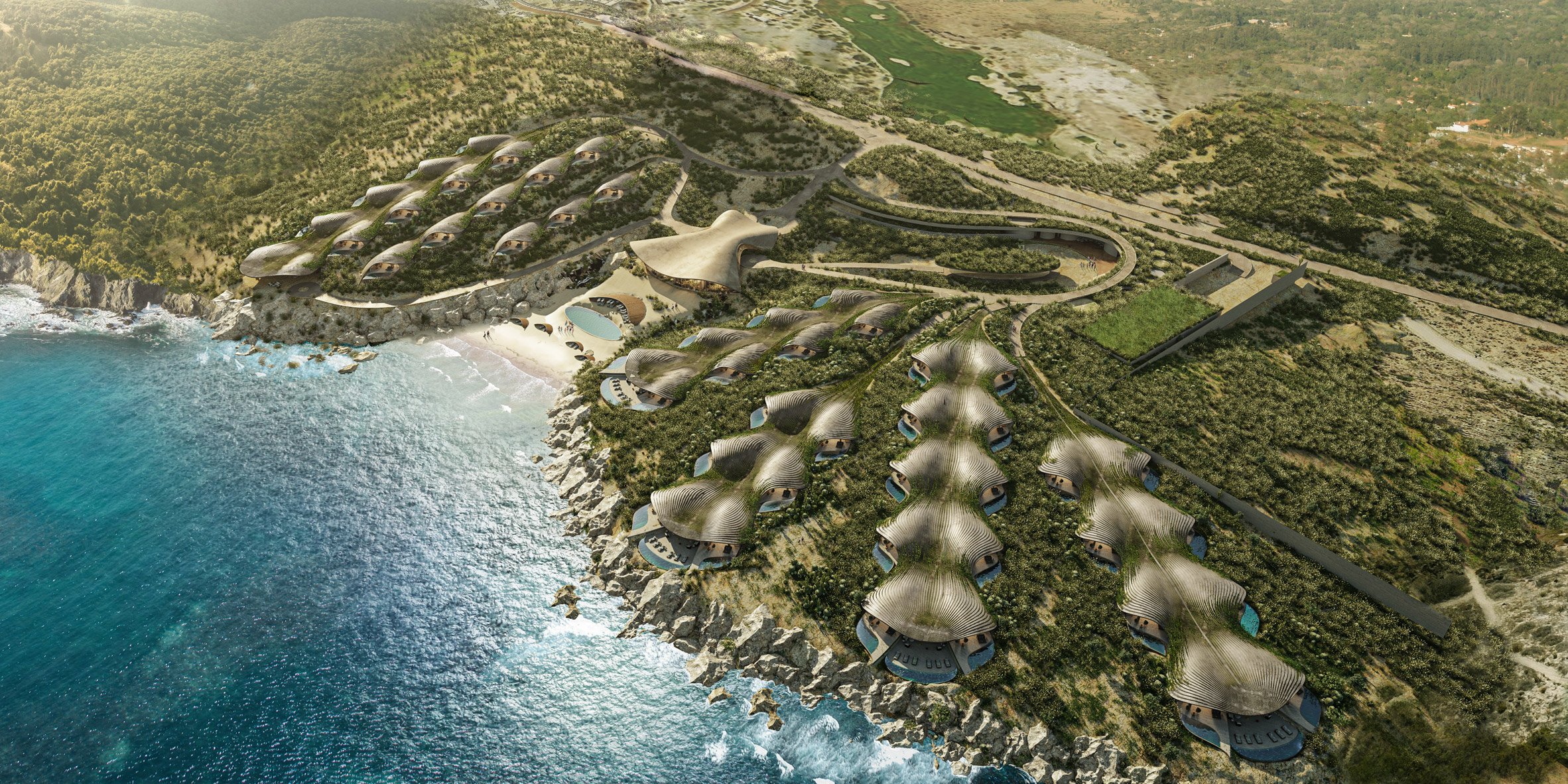 “In Chablé Sea of Cortés, a single constructive element is expressed as a large organic roof that forms oscillations along the volumetry, being roof, wall and access road at the same time,” said Sordo Madaleno Arquitectos principal Fernando Sordo Madaleno de Haro.

Spanning 64,912 square metres, the Chablé Sea of Cortés resort will feature 50 hotel suites, a beachfront amenities building, a lobby and a restaurant all designed in a similar style.

The masterplan comprises hotel rooms arranged in branches that run parallel to the hill; they will be built at a 23-degree angle to the slope to allow for seafront views. Native vegetation will be planted across the striated concrete rooflines and surrounding property, and interspersed with gravel and rock.

“In order to create the sense that there were no interruptions within the landscape, a gently undulating surface was devised which would integrate every room into a single folding gesture and gradually separate from and rejoin with the landscape,” the studio said. 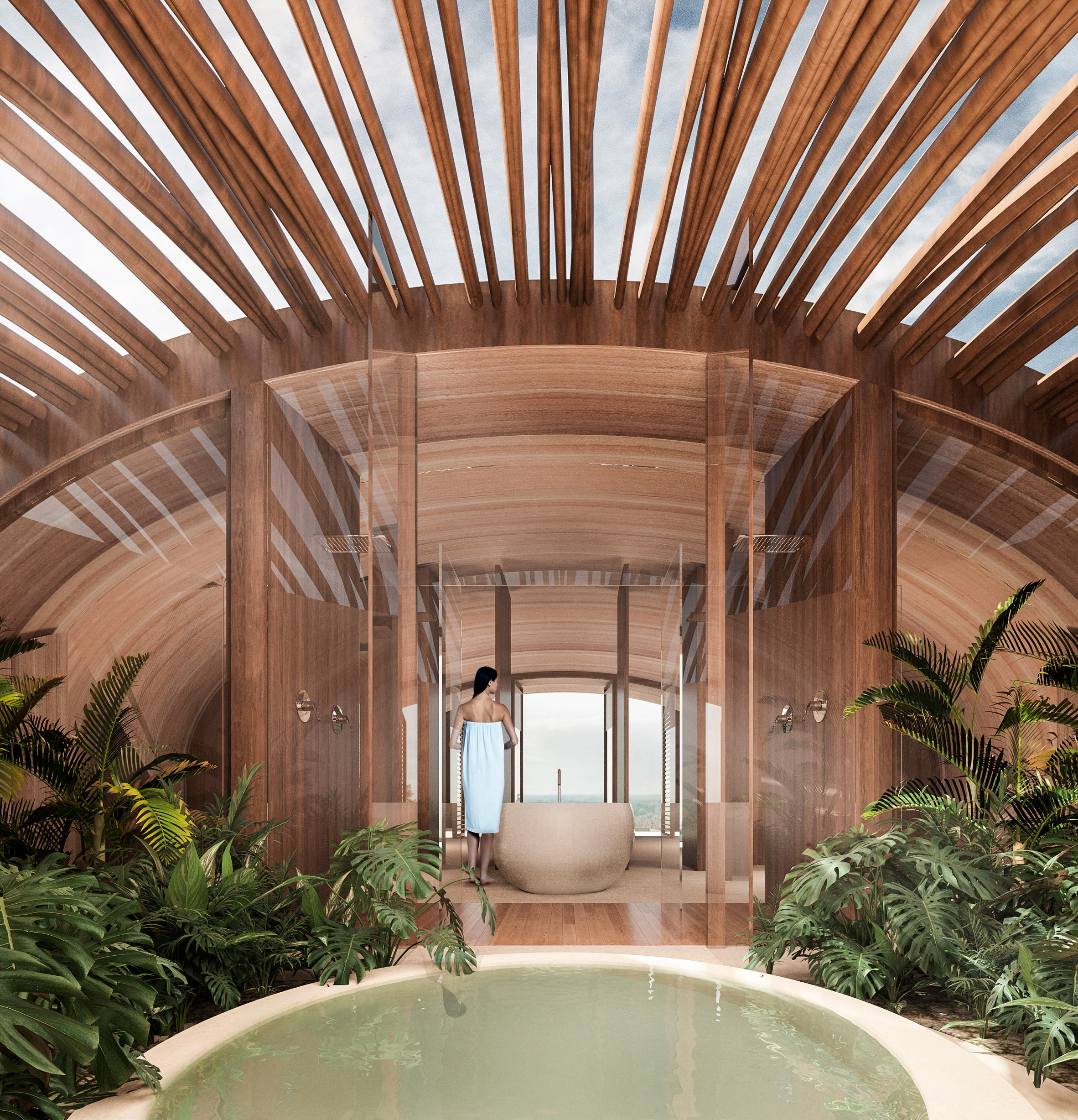 Hotel suites will be split across the site’s two hills, while the lobby and amenities will be located in the valley in between. Back-of-house spaces will be set at the entrance along the main road.

Suites will have a pool and deck at the front to face the Sea of Cortez, and the roof will rise and curve overhead to form an entrance and pergola. A rear garden will be visible from the room.

“The [suite] form was carefully designed to open towards ocean views and close to shield views into any other rooms,” the studio said.

Rooms will come in three sizes with decor crafted by Mexican interior designer Paulina Morán – including off-white and wooden surfaces.

Chablé Sea of Cortez resort will also include a wellness centre, spa, event space and shop.

Construction on the hotel is slated to begin January 2020 and be completed by 2022. It will be located about two hours drive north of the town of Cabo San Lucas, which is within the region Los Cabos. Nearby projects include Hotel Mar Adentro by Taller Aragonés and Solaz resort, which was also designed by Sordo Madaleno.

Renderings are by CG Verón unless stated otherwise.

Back Porch Rebuild and Refresh